Short interview with Astrid Mager from network cultures on Vimeo.

In the first session  Astrid Mager tells us about search engines, pointing out that Google is not the only search engine that is using personal data for commercial interests, or for instance, collaborating with the NSA. She holds that we shouldn’t blame only Google as there are many other factors involved, but proposes several alternatives and explains their characteristics under the title Is Small Really Beautiful? Big Search and its alternatives.

“Google dominance is not external from society, but internal, Google is something we create all together”. It is important to keep critizing citicizing surveillance, not only blaming Google butalso researching on the power relations that are involved in the construction of search engines. Astrid holds that capitalism is making profit of our networks and algorithms. The users are interested in finding the most convenient information, and the search engines are very good at this. However, what we  shouldn’t forget is that there are economic relations in this flow of data between providers and users. Content providers and users collaborate together to create Google’s business  model. Indeed,  Google  is the great mirror of the capitalist society in which we live in. 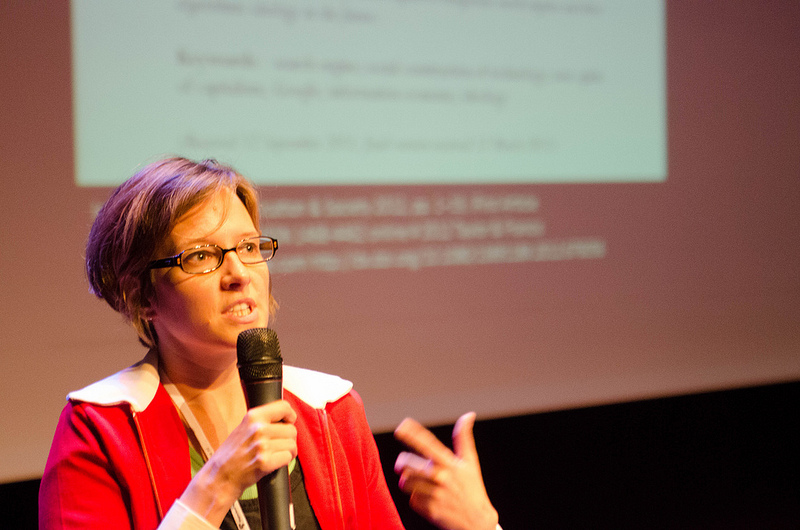 In this sense, there is a rise on critical debates about data protection, renegotiation of technology…  Astrid gives several examples as alternatives to Google, especially those ones that have a strong ideological stand. She shows the example of duckduckgo.com, a search engine that for instance uses this slogan: “Google tracks you. We don’t.” Duckduckgo is supposed to be a search engine that does not filter personal data, a search engine that respects privacy, a real alternative for data collecting. The principle of privacy as the ideological basis of this alternative to Google. Because privacy, as Astrid holds, it is a civil right, something essential for the constructions of democratic societies. DuckDuckGo uses more than 100  search engines and sources, both commercial and non-commercial, including Wikipedia and other crowd-sourced sites, but also Bing, Yahoo! (displaying Bing results)  and Yandex. That means that Duckduckgo.com is finally dependant on business parties, that is to say, it doesn’t use itself filters but uses other search engines that certainly do. (It additionally runs its own web crawler called DuckDuckBot, but its index is rather small.)

Another alternative she explains is ECOSIA. ECOSIA diplays solely results from Bing and  it supports ecological projects. ECOSIA donates at least 80% of its income to a tree plating program in Brazil. Basically, their ideology and business is based on this, and moreover, it runs on green power. Another alternative she suggests is WolframAlpha.com, she calls it the “Knowledge Engine”. WilframAlpha.com is devoted itself to the scientific field and it really tries to give the users great answers. Nevertheless, WolframAlpha.com is a commercial tool because it uses commercials in order to have free search, or allows you the possibility to pay monthly and have no ads. We may say it is more a software rather than a search engine. But the great search engine she proposes is YaCy. YaCy tries to  provide  decentralized search, it is a free software and according to their website they should be totally transparent. In contrast to all other search  engines, it really fits with the idea of freedom of information and ideology  embedded  in technology. YaCy is the best alternative in both technical and ideological level.

However, Astrid notes that big search engines such as Google have lot of  experience  managing data and they have a big  infrastructure as well. Will be then alternatives possible and  successful? As Astrid holds, maybe it’s time to attract engineers and get more people involved and concerned about alternatives that respect our privacy.

Society of the Query #2 – Astrid Mager: Is Small Really Beautiful? Big Search Engines and its Alternatives from network cultures on Vimeo.