The popular depiction of the search engine as a borderless, global medium is an illusion, says Min Jiang. Search engines have become increasingly re-territorialized driven by several geo-graphical, political-legal, technological and economical factors that supersede our cosmopolitan impulses. As a native Chinese who has been doing research in the States, Dr. Min Jiang is the perfect speaker to talk about online search in China. In her presentation ‘Search Without Borders’ she shows that free search in China is not only limited by the so called Great Firewall of China, but also by several factors from within the country itself. 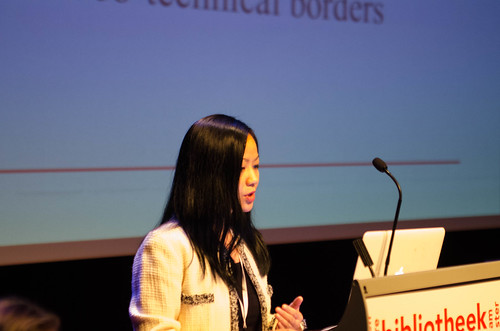 Jiang starts her presentation by introducing her former workplace: the predominant state television broadcaster of China called China Central Television. It happens to be the case that this Chinese news agency uses exactly the same abbreviation as the infamous surveillance cameras in England: CCTV. Jiang finds it relevant to see how search cameras are somehow similar to these camera’s and news programs. Are we really aware of the borders of search? It might be strange to talk about it if you do not see these borders. Therefore, addressing these borders is vital.

Borders on Search in China
Nicolas Negroponte once prophesied that after exposure to the Internet the state would dissolve like a mothball. In contrast to this, Jiang argues that now, about two decades later, the state is pretty solid and not going away. The nationalization of telecommunication services is becoming more and more a reality. Ironically, Jiang points out that national states have never been more important, e.g. think of the Snowden case.

China has 391 million Internet users, of which 60% is under the age of 30. In the past 15 years the Internet took off in China and it still has a lot of room for growth. Nevertheless, there are four types of borders Chinese users have to deal with. Borders are often messy and porous when created digitally, says Jiang. How can we trespass them?

This has great effect on the use of Internet, since only about 100.000 people speak proper English in China according to Min Jiang. This is a really small number when considering that this is only 1/7th of the Amsterdam population.

There are many different dialects and languages in China. Users are constrained by this since they often have limited understanding of other dialects and writings so their source to information is limited. Moreover, search results differ between these various dialects and writings. A way to circumvent this problem, voice search and translation are suggested. Yeeyan for example is a volunteering translating organization in China. The main goal is: can we specialize search to enable people to talk? Jiang says we need to do more research about this.

Geo-political borders
Secondly, there are some political-legal borders that constrain the search engine as being a global, borderless medium. These borders are erected for control purposes and web filtering. There are two versions of Internet in China with two dominant players: Google and Baidu. However, Baidu gives quite biased results and there are government related sources as well. In terms of search from the mainland of China, Baidu has filtered a lot of search to start with.

The Great Firewall of China does a lot of censoring. Nevertheless, not the Great Firewall is the biggest problem, but the internal outsourced material. The Firewall does perform censorship, but what does it matter if Chinese citizens can access American news when they are not able to understand it? Although the firewall prevents a lot of Chinese material to mainland China, there are more borders to be looked at.

Geo-technical borders and Economical borders
Third, some borders are automated by geo-location technological regimes. Localization is becoming more important. What if we want to diverse content in terms of localization? How can we balance localization and globalization at the same time by search? This is a field of search that will grow in the near future and according to Jiang a lot of research needs to be done.

This localization also has impact in the economical side of search engines. In terms of ad spending, a lot of money already goes to local search. This will increase, predicts Jiang. Hence, we need more focus on localized search.

Conclusion
We have always thought of the Internet as a public sphere. But by now public space in the Internet has been localized and territorized. This raises a lot of questions according to Min Jiang. What do we value: local content? Global content? We are not provided a choice. What about access? Can somebody do research tracking? What about choices in contexts? Why don’t search engines give us choices and let us choose what we want?

Min Jiang concludes with expressing her wish that we can all think more about search and borders. What we want to find, will ultimately be the biggest border is her prediction.

Society of the Query #2 – Min Jiang: Search Without Borders? On Borders and Chinese Search Engines from network cultures on Vimeo.