Short interview with Rebecca Lieberman from network cultures on Vimeo.

Thus began Rebecca Lieberman’s presentation in the ‘Art of Search’ panel at the second Society of the Query conference, introducing and setting a foundation for how to think about her visually similar imgs project. Her piece borrows its name and concept from Google’s Search by Image tool, a feature introduced in 2012 to allow users to reverse-search images by querying Google using visual rather than textual data. When Google is unable to locate an exact match for the image, it utilizes that image’s “visual DNA” – color, composition, pixel density, and other factors – to serve up a proliferation of aesthetically similar images. According to Lieberman, Google places the image into a grouping of related images with a “shared formal vocabulary,” bringing together disparate contents and contexts into the same space. 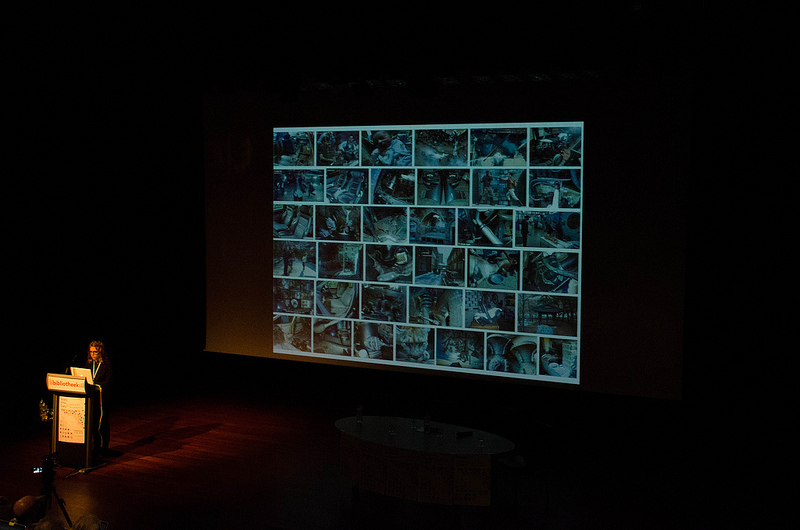 Rebecca Lieberman, presenting on the ‘Art of Search’ (photo by Martin Risseeuw)

Lieberman’s project consists of several interrelated components in a variety of media, including a series of artist books, a browser-based work meant to situate the images in their native habitat, and a series of looped videos, all composed of images mined from Google. After feeding the Search by Image tool banal images such as cat photos and selfies, Lieberman takes the results she finds to be of interest and assembles them together in a sequence all her own. She describes the process as being like a game of telephone or a stream of consciousness, stitching images together in what she envisions to be a visual poem.

Lieberman uses both literal and metaphorical connections to influence her choices (which she exemplified by showing an image of a soap opera star in a bathtub followed by one of a rhinoceros bathing in mud), and so her selections are filtered through her own subjectivity rather than being what she calls a “straightforward quotation.” Thus, the project taps into the poetic potentialities of search, and she sees Google’s tool as a “gift,” allowing us “a new way of reading pictures.”

By selecting the images and ordering them, Lieberman can be said to reclaim authorship from or at least share authorship with Google. She relates this investigation of authorship and appropriation to the art historical lineage of works asking similar questions, such as the paintings of Ed Ruscha, and also to contemporary Internet practices such as re-blogging and pinning.

Lieberman’s interest lies particularly in the meaning generated by the interstices, how each viewer may make different interpretations based on what appears to be missing between the images in sequence, as in line breaks in poetry or cuts between the scenes of a film. Without linear narrative, meaning accumulates through the assemblage of images and the spaces between them. Lieberman’s intent is then to investigate how meaning may shift and transform as images travel across the Internet.