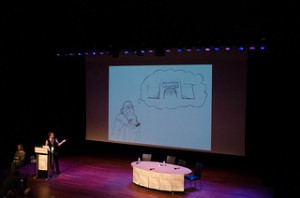 Thomas Petzold started the second session of Society of the Query #2, ‘Search Across the Border‘, on a more positive tone as he gave kudos to the search engine. He commended it for still being a great tool, one that has had a huge impact on not only the collective memory of our species, but also on how we collaborate when trying to solve problems.

It would thus appear that Google figured out the best way to achieve a maximum return on investment: by supporting 5 percent of the world’s languages, the company has managed to reach more than 5 billion people.

After stating the facts, Petzold took the audience on a storytelling journey and invited those present – by making use of lively illustrations – to imagine a scenario when they are travelling in a pristine, uninhabited landscape and their car breaks down. As they start to panic about basic needs, such as food and water, the obvious thought pops into mind: “I’ll Google it!” However, if no local information is stored, the stranded travellers would only get irrelevant results because no knowledge from the people who live there is stored in the cloud. In another, somewhat similar scenario, a hunter accidentally breaks the rules when failing to understand – or translate with Google’s help – a local sign that reads “No hunting!”

Going back to his premise, Petzold stated that it becomes evident why the five-percent gamble actually matters. The benefits delivered and received by different language users differ greatly. For instance, the cost-benefit analysis of language favours either languages that are cheaper to support, such as Latin-alphabet based European languages and those with significant market benefits, such as Chinese and Arabic. He argued that the current tradeoff between knowledge diversity and market efficiency is being made at the expense of the former and in favour of the latter.

Petzold proposed a solution to this unfair tradeoff, namely to involve all stakeholders – everyone who has an interest in providing local knowledge. First, we need to understand what changes these stakeholders would experience and would entail collaboration between private and public institutions. Also, the stories of change need to be told because people need to hear what value is created through the promotion of local knowledge.

To conclude, Petzold claimed that the current state of Internet search does not cater to the vast potential of human knowledge and that we are in dire need of further social and technical innovations that can serve more users in more meaningful ways.