To kick off Tactical Visual Culture, we partner up with The Hmm for a special event. 8 speakers, including researchers, artists, performers, and viral TikTok creators, that are working, making, and thinking around the theme of ‘video witnessing’, share their vision on what the state of online video is. Let us introduce them to you. 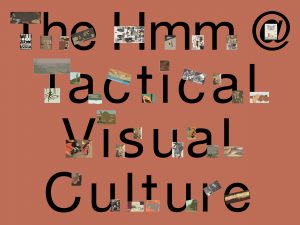 Florian Göttke is an Amsterdam-based visual artist, researcher and writer. He investigates the functioning of public images and their relationship to social memory and politics. He wrote a book, Toppled, about the fallen statues of Saddam Hussein, and an experimental dissertation, in which he combined visual and textual narratives to talk about hanging or burning effigies as political protest. This night he speaks about the current wave of monuments that are being toppled in effort to decolonize society, and other moments in history that had the same revolutionary energy.

Albert Figurt is an Italian video-artisan, multi-instrumentalist and independent researcher, interested in post-cinema, found footage, videoart, mockumentary, hikikomori and metafiction. He isolates words, notes, images, cross media happenings and fuzzy thoughts into various spaces and environments. As a Video Vortex associate at the Institute of Network Cultures, he is obsessed with the socio-anthropological & perceptualqualities of online video. This evening he talks about desktop movies and screencast narratives.

Alex Gekker is an Assistant Professor in the New Media and Digital Culture department at the University of Amsterdam. He writes about how sociotechnical systems are designed to influence users, about maps and surveillance, the quantification and datafication of society, and about the experience economy and he produces interface critique. Also, he’s interested in games and play – both as researcher and practitioner. This event, he discusses the influence of TikTok videos on the Indian 2019 general elections.

Marieke Kuypers is a 25 year old journalist and social media specialist. Oh, and she has a TikTok account with over 30.000 followers and the videos of her and her hamster got nearly a million likes. This evening she talks about how she got hooked on the platform and and she shares her knowledge about how to use its algorithms to create viral videos.

Mark Evenblij is a mechanical engineering student from Delft who thought himself how to code and who enjoys working on neutral networks. The quality of deepfakes and other synthetic media has become so high, that soon, we will no longer be able to tell the difference between fake and real with the naked eye. How can you recognize disinformation and how do you expose a deepfake? That is the question he answers this evening.

Leyla (a.k.a. Nightlight) is a The Hague based radio host, illustrator, video editor, 3D modeler, e-textile sewer, metal worker, interaction designer and dancer (this multidisciplinary artist and researcher can do pretty much anything). As a French Algerian anti-colonial and queer activist, they dive deep into uncomfortable discussions. Leyla’s work is an invitation to look inwards and out, to reimagine past and present through the lens of consent, stolen and reclaimed.

During this event they talk about digital archiving, revolution and community, and how to cultivate sustainableand transformational digital activism. But can we imagine a video activism focused on preservation rather than urgency as well? Let’s try and find out aboard Just This Space-ship.

Next to being a Creative Media and Game Technologies student, specializing at Motion Design, at Saxion, Len Borghuis is also a YouTuber on his way becoming an independent web artist. During this event he talks about YouTube fame (and the struggles that come with that), the influence of meme culture, how to find your identity and creating a workflow, how to deal with YouTube algorithms and how to stay authentic, original, productive and relevant all at the same time – basically, he’ll give you a brief survival guide for online artists.

Hilda Moucharrafieh investigates the influence of digital technology and politics on movement in the public sphere. Dina Mohamed her work is concerned with finding possibilities to regain agency under deterministic logic of technology and overflow of information. This evening they present their collaborative project, Tracing Erased Memories, a city walk which aims to draw lines between state violence and residents’ memories of political struggles amidst a rapidly changing image of the urban space – injecting the forcefully erased voiced back into the center of our cities.

Digital visual cultures come with an abundance of more playful, ironic, and emotive imagery, such as GIFs, memes, and emojis. Just as we have studied the prominence of cat videos in the first edition of Video Vortex, we grant importance to this playful side of digital visual culture. GIFs and memes can be tools in [...]

Albert Figurt is an Italian video-artisan, independent researcher and Video Vortex member. In this series of videos, which are recordings of his Desktop Narrative Workshop he gave on the 3rd of November in 2020, he gives a practical introduction to the art & craft of “screencast storytelling” – or how to come up with some [...]

During this workshop, we ideate and explore tactics to turn iconic buildings into visual gateways that address Amsterdam’s stakes in historical trade routes and slavery. By appropriating physical and digital access points and interfaces, we turn them into potential tactical tools to highlight our city’s problematic past. Using fast prototyping techniques we will test out [...]