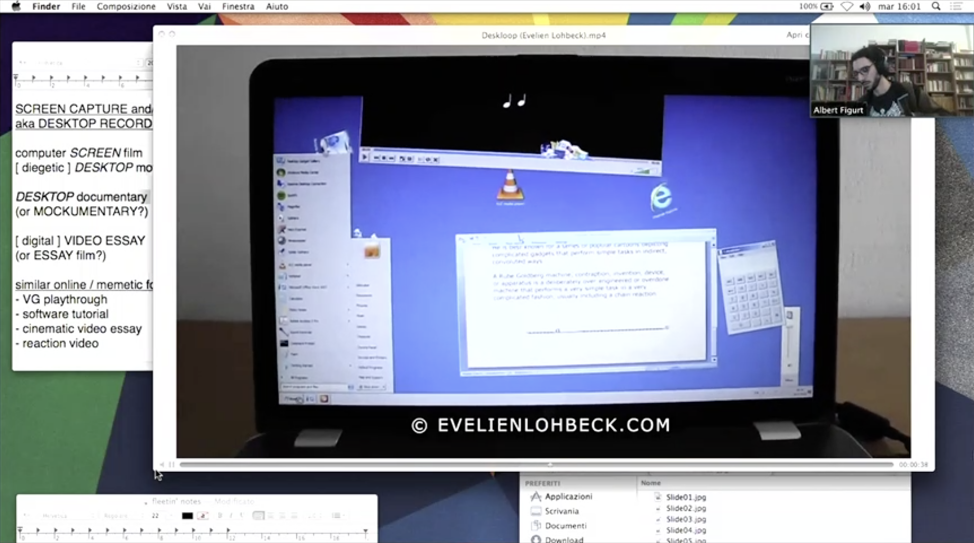 On November 4, 2020 the INC and the Visual Methodologies Collective had the pleasure to host a Desktop Narrative Workshop by Albert Figurt, an Italian video-artisan, multi-instrumentalist, independent researcher, and Video Vortex member. Since a large part of our lives seem to happen within the constraints of the screen, the ‘Desktop Narrative’ is a welcome addition of storytelling to the intimate setting of one’s desktop. Meeting up in a Zoom call, a physical meet-up was not in the cards, Albert shares his desktop and his storytelling practice.

Opening by asking everyone who joined to open up their microphones, Albert defies the ‘conceptual silence’ of sitting all together in a Zoom grid – there is the sound of cars, music, other people talking, and even just the wind, that make real silence impossible. Digital or not, no workshop should happen in silence. The glitch quickly introduces itself in the workshop. As one participant has a problem with her microphone or speaker, Albert’s voice comes back to us delayed and distorted – a first interesting aspect to play around with.

Sharing his slides as PNG’s in preview mode, Albert invites us onto his desktop, where inspiration can be found anywhere. Holiday photos, a crowd holding up their phones to record a concert, the lyrics of a pop song at the bar, the way literature describes the act of clicking, scrolling and looking at various screens and windows – they are all departure points for a narrative on-screen. The screen surrounds us in unexpected places, framing experiences and layering representations over realities.

When asked to share our desktops in the call, a screenshot set as Zoom-background, we collectively dissect the identities of participants. The files – or lack of files – on our desktops are stories by themselves. Suddenly we look at a sublime desert on the screen of one of the participants, he’s nowhere to be found. When a woman is asked if she’s left-wing, most of her screenshots are in a ‘pile’ on the left side of her screen, she explains: ‘I just throw all desktop photos on a pile. That’s how I organise it. When they overflow, I’ll make a folder called Desktop.’ Others dissolve in their desktops, their faces blending with a Mac OS hill (named Sierra) or a frog on a leaf wallpaper, a mug disappears in an archipelago of the same color (named Catalina Day). 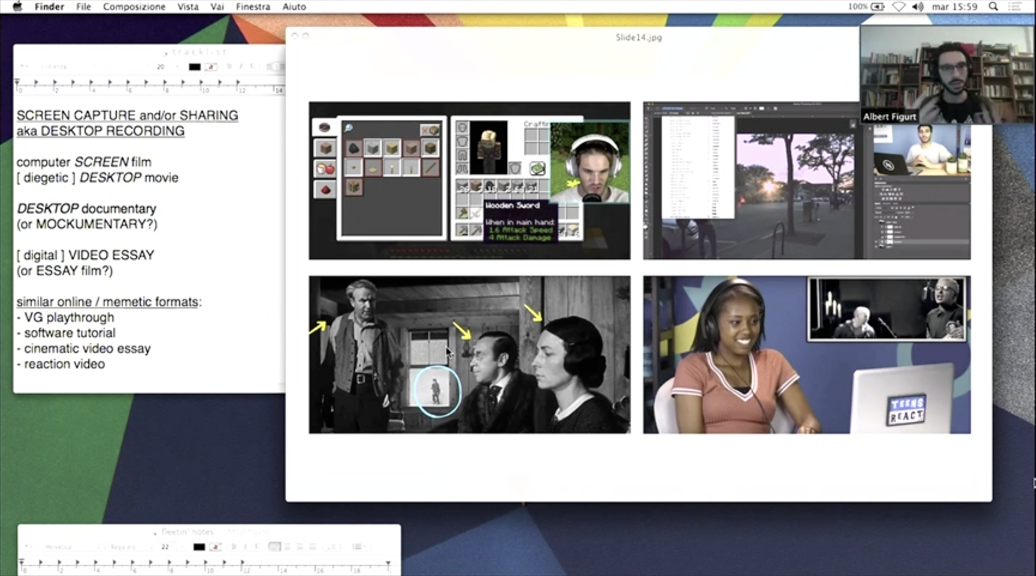 Albert takes us through the theory of the Desktop Narrative, whose definition is still yet to be defined. As ‘a film that completes unfolds on a computer screen’ (or a screenshot? why not on a smartphone?) to ‘a – that completely unfolds on a – screen’, the possibilities open up. The screen has 3 functions: a window (apps showing content), a frame (in which one navigates), and a mirror (metaphorically, and in its black mirror definition). Between found footage and real-time streaming, these Desktop Narratives play with the various functions, experimenting with what to show (a file, a webcam video, a browser, … ), movements (movement within the frame, relationships between different windows), and escaping the constraints of the screen to show the body of the device.

After discussing strategies and possibilities, it’s time to experiment. No special equipment or professional software is needed, just a computer and screen-recording program (Quicktime will do). Based on Rules of the Screenmovie, 3 ground rules are established:

The task: produce 15 seconds of Desktop Experiment in 15 minutes. In break-out rooms, we meet one another on the screen. The results: A laptop cover passed along in circular motion in the Zoom grid, turning into a loading sign; election anxiety through live streaming; recordings in recordings in recordings; faces becoming opaque as the desktop on the background slowly takes over. 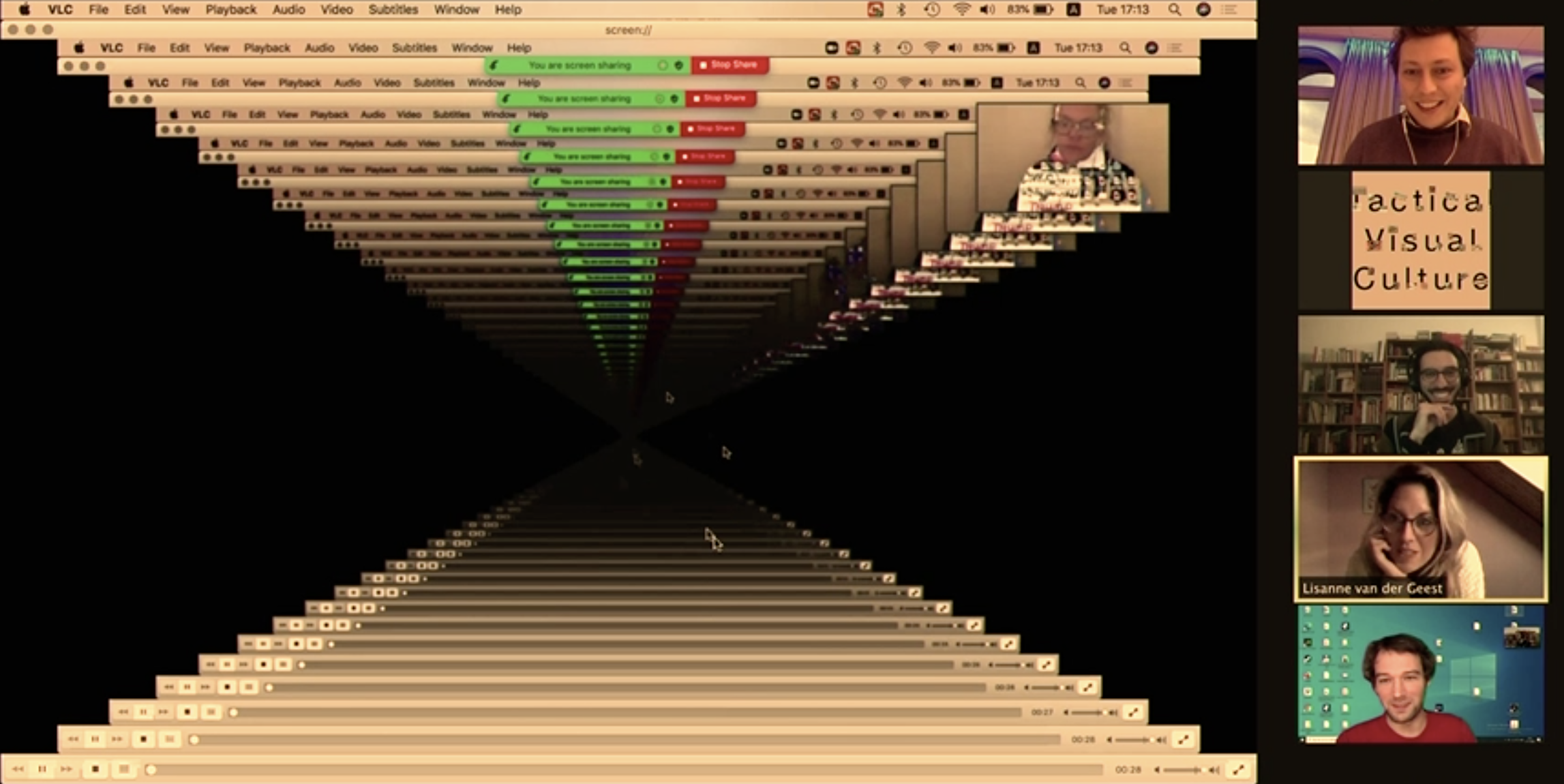 Although unplanned, coming together on our desktops couldn’t have been more fitting for this workshop. Albert brings theory and experiment to a genre of narratives. Beyond functionality, the icons, apps, and cameras of our digital devices have storytelling potential – Albert’s workshop is an open invitation to see everyday interfaces as a playground.

Digital visual cultures come with an abundance of more playful, ironic, and emotive imagery, such as GIFs, memes, and emojis. Just as we have studied the prominence of cat videos in the first edition of Video Vortex, we grant importance to this playful side of digital visual culture. GIFs and memes can be tools in [...]

Albert Figurt is an Italian video-artisan, independent researcher and Video Vortex member. In this series of videos, which are recordings of his Desktop Narrative Workshop he gave on the 3rd of November in 2020, he gives a practical introduction to the art & craft of “screencast storytelling” – or how to come up with some [...]

During this workshop, we ideate and explore tactics to turn iconic buildings into visual gateways that address Amsterdam’s stakes in historical trade routes and slavery. By appropriating physical and digital access points and interfaces, we turn them into potential tactical tools to highlight our city’s problematic past. Using fast prototyping techniques we will test out [...]