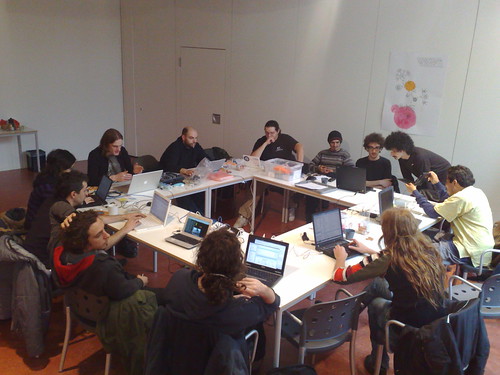 On the first morning of Winter Camp, the dyne.org network had a programming briefing to get started on building an application for video streaming. Denise ‘Jaromil’ Rojo, who is the appointed coordinator for the network during Winter Camp, functions as the hub within this network. He structures the briefing and appoints the best man for tasks such as main architecture, facilitating programmers, testing for security and creating documentation for non-tech savvy users.

It is interesting to see they really make an effort to address all layers of the project and Jaromil is actively pushing dyne.org members to extend their network to include members of the Bricolabs and FLOSS Manuals during Wintercamp. This open attitude lies at the core of the type of network dyne.org seemingly is; created out of different networks, still part of other networks and ready to extend into others. It’s a classic example of online hacker communities and the related mentality, which are often temporary groups coming together for a specific task of goal.

Andy Nicholson, a free software hacker and new media activist who is also part of the EngageMedia collective, explains that members of dyne.org have met each other in different places, being part of different networks, and eventually joined up together in dyne.org. He explains that new membership, at least in his case, was based on invitation. The network is primarily Europe based, so although the European part is meeting offline more regularly, Andy is primarily contributing online.

The young and displaced brotherhood of hackers, alchemists, radio amateurs, mathematicians and nomads, has set itself the tasks to ensure that their open source applications can run on light platforms such as the first generation EEPCs, which sell well under 200 euros. This type of laptop is booming in the developing world where large groups of the population are now able to own a laptop.