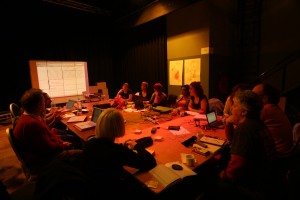 As written in the big Winter Camp book, ‘Upgrade! is an ever-growing network, upwards of 30 nodes at present time, started in 1999 in NYC’. All these nodes share a same interest, uniting art, technology and a shared commitment to the bridging of cultural divides, for which the regular organization of local events is one of their main activities. The nodes are widely spread across the globe, resulting in numerous geographical boundaries. On this first day of Winter Camp, an international group of node representatives gathered at Studio K to discuss some important issues relating to their network structure.  All topics of discussion were on forehand cleverly organized in a Wiki, starting with questions of network identity.

The Upgrade! network consists of two network structures. First there is the international network of nodes, of which some representatives – largely curators – are present in the Winter Camp group. And second there are the individual nodes that also form their own local network, mostly consisting of curators and artists from the local community. Both levels struggle with questions of identity, but as the discussion revealed, it’s primarily on the local level that a lot of issues pop-up. What became clear in the discussion is that every individual node has to deal with its own specific local reality, resulting in multiple local identities. Not every network shares the same amount of activity. The organization of events, and internal gatherings follow a very irregular schedule amongst the different nodes. Some of the nodes even had, or are still in, a mode of hibernation, in which they don’t organize events at all. A serious lack of budget seems to be an overall issue, affecting every individual node in the network. With no financials to pay yourself, or the exhibiting artists, persevering in Upgrade! looks like a constant funding struggle. Logically this financial issue relates to matters of motivation, as money still is a powerful motivator.

But the motivation issue isn’t much of a topic for the individuals in the Winter Camp group itself, as each of them seems to have their own strong motivation to keep the network functioning, for which it’s important that each of them knows each other in person, and they thus already form a strong group that keeps motivation intact. The issue is rather how to spread their motivation to the actors, mostly artists, which are active in the individual nodes. And following, making these artists aware of the international Upgrade! structure without forcing them to be part of an international institution. Again this issue denotes a tension that exists between the International structure of the Upgrade! network and their individual nodes.

At present it looks like the individual Upgrade! nodes don’t share a collective identity, as the local identity of the individual nodes seems to be incompatible with the international Upgrade! network that is far more homogeneous. The nodes are spread across the globe, and thus facing a lot of geographical boundaries that don’t only problematize communication amongst the nodes, but also complicate setting up a general and coherent identity, and spreading that within the local setting.

It seems the International level is working, question is how to get the local nodes working as well. So what can the International structure bring to the local? The Wiki that is shared amongst the nodes seems to be a useful step in sharing, and collecting information that can contribute to the functioning of every node. Maybe it can be a shared resource, and help the network to come-up with some ideas and models that in general can be organized amongst the nodes.