MyCreativity met on Day 1 of Winter Camp to discuss issues concerning open-source urbanism. Today the group was composed of fourteen artists and activists that (as a group) were all meeting together for the first time. The afternoon session included three presentations full of examples, a history and criticism of open-source architecture.

Anthony Iles on the 2012 London Olympics and Flexible Architecture
Anthony Iles addressed the group on issues of industrialism concerning the upcoming Olympic Games in 2012, as well as questioned what flexible architecture says about the collapse of play and work. For instance once you create a flexible scenario: how is it structured and how is it governed?

The architect Cedric Price’s Fun Palace is an early example of flexible architecture: a building comprised of pre-fabricated walls,  floors and stairs that could be moved and reassemble by cranes. He wanted to use cybernetics to model the activity of visitors and to see how interactive and playful they could make an area; resulting in a model which stressed the distinction “this [here] is play, while this [over here] is industry”. Illes pointed out the influence of Price’s Fun Palace on Richard Rogers’ Pompidou Centre and went on to ask, “Where are the Fun Palaces of today?”  To which he replied that the modern examples can be seen in Roger’s Millennium Dome as well as in the upcoming design of the 2012 London Olympics.

As the site of the London Olympics are confronted with issues of money, funding and other unforeseeable events, the project will need to be flexible in ways that go beyond Price’s original vision:

Merijn Oudenampsen on Open-Source Architecture
The second presentation by Merijn Oudenampsen explored the possibility of formulating a positive urban agenda by revisiting the utopian urbanism of the 1960s and 1970s, and combining those with the current agenda of the open-source movement. He explained that in the late 60s, the urban space was where the struggle against authority took place (e.g. the civil-rights riots in Prague, in Saigon during the Tet Offensive, as well as in Paris and the United States). “In the 60s there were two logics emerging”, explained Oudenampsen, “one of a functionalism and one of an open-source urbanism attacking this previous functionalism that was part of modernist architecture.”

Oudenampsen contrasted the English pop art architecture group Archigram with the Dutch architect Constant Nieuwenhuys. He criticized Archigram’s centralized planning agency and their ideas about a “new economy of individual lifestyle consumption that remained couched in the language and concerns of functionalism.” Nieuwenhuys’ New Babylon project, on the other hand, was a metaphor for open-source urbanism “inhabited by a creative, nomadic mass, that would be able to spontaneously reconfigure every aspect of their environment.” It was this new avant-garde of creativity that Nieuwenhuys believed would take over the world.

Currently Archigram’s philosophy of close-source urbanism has manifested itself in companies like Microsoft. For example:

So after looking for Nieuwenhuys’ influence on modern society, Oudenampsen emphasized, “The only fertile domain of utopian politics today seems to exist in the digital world, in the open-source movement”. He cited examples of Pekka Himanen’s Hackers Ethic, as well as Howard Dean’s internet-propelled campaign (which lead  to the term ‘open-source politics’). Oudenampsen then began his discussion on open-source architecture with a quote by Brian Carrol:

Oudenampsen seemed optimistic about the potential for the creative city, but gave us some clear and shocking examples of open-source architecture impostors. First he told the MyCreativity group about an article he had recently read in a 2006 edition of Dutch Real Estate Magazine. In the article a few real-estate entrepreneurs said, “the concept of the creative city is on the rise, sometimes planned, sometimes organic, but up till now always thanks to the real estate developers.” The article talked about how they use artists to spice up the values of real estate and say “the thing not to do is to publicly announce you’re going to haul in an artist, instead give them the feeling they thought of it themselves”- to which Geert Lovink quietly laughed, “evil, evil”.

Oudenampsen followed up with some additional examples of pseudo-open-source architecture in what he referred to as “Urbanism Web 2.0”. He included the sites Buurtleven.nl and FixMyStreet in England, but most accurately illustrated the problem with the Wij Bouwen Een Wijk example. The site wijbouweneenwijk.nl (similarly to the architects in the Dutch Real Estate Magazine article) allows the community to feel like they are in control because they can post and comment on new residential designs, but in reality it is the central powers that have the final word on which ideas get approval. “Open-source is not just about having the Internet – it’s about how you deal with knowledge”, he said. Many people say these projects are revolutionary, but they’re NOT very revolutionary – they are normal and they are just pacifying the public. If we are to establish true open-source architecture “we can’t just provide the emperor with a new set of clothes”, said Oudenampsen, “but we need an emperor that is openly exhibitionistic.” 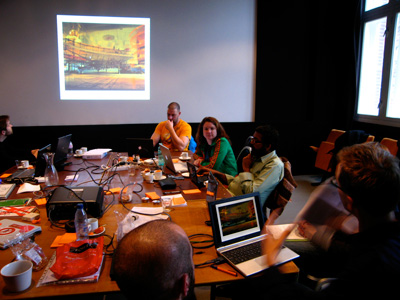 Micheal La Fond and Reflections of Berlin
Micheal La Fond looked at the “incredible challenges” that have faced the city of Berlin. In his talk he emphasized issues of culture and communication more than technology by asking: how do the people of Berlin live together? Work together? Organize themselves and share their stories? He believed that the people of the city need more rights and should be allowed to design and manage their immediate environments. “We need to engage people, and show them what is possible”, said La Fond.

Considering the current economic crisis, La Fond told the story of GLS, UNVELT, and Trias – three Germany banks “that are fundamentally built on another idea”. He explained,

“They say we’re not interested in speculation and profits…we’re interested in changing ownership structures. And these banks are doing well right now, they’re not taking a beating at all. They don’t have the bad credit that they’ve sold somebody else, they’re working on small projects that have a good foundation and they’re pretty healthy right now.”

MyCreativity will meet again during the next two days of Winter Camp and present their findings on Day 4.