After getting up real early I set out from Leiden and started my trip to the Studio K building in Amsterdam. I tried to fit in the best I could but didn’t know anyone, had no clue where to go and was really confused about what to do. Everyone seemed really at ease while I felt more like a lost soul. Being at Winter Camp for only one day thus meant I required a mission. I needed a reason to be there, to find my way in this big pool full of ideas and people. Everything I knew until then is that it was an event about networks coming together, about organizing a network and about sharing knowledge. These might be nice expressions but it didn’t mean anything to me. What does it mean to be a network why are people in a network? Those were things I wanted to know.

My day started at 9.30 with wandering around the different networks looking for a nice workshop that would fit me and my interests. But finding a workshop was actually harder than it would seem. Being at Winter Camp one of the last days meant that everybody was tired and needed their sleep. Many groups worked for the entire night and didn’t organize anything for the morning program. After visiting the fourth empty room I decided to wait a while and learn more about the networks in the meantime. The first thing I noticed from reading the booklet is that, even though all the networks are really different, they actually have a lot in common. At this moment it was a mere gut feeling, I had no evidence but I was desperate to find out why felt like this.

10.45, people were finally awake and active. A penetrating smell of fresh made coffee and unwashed bodies contributed to the moldy ambience, it actually smelled like the last day at a music festival. Again I started looking for some action. Most groups were in a heavy discussion about organizing their network. I tried to join them but, even though “Open” is one of the buzzwords at Winter Camp, everybody seemed more occupied by their Macs and their network peers. When I walked into several rooms I felt unwanted, they looked at me like I didn’t belong there (or was that just something I personally experienced?) and I quickly walked away. The first step is the hardest, especially when you try to interfere with such closed networks.

One of the networks, however, made an entirely different impression on me. The people of Free Dimensional, a network that comes with creative solutions for contemporary human right issues, welcomed me the moment I arrived. The tight circle they were in immediately opened up and introduced me as one of the bloggers, I actually felt welcome for the first time that day. At the table was a really mixed group of people: artists, project managers, communication experts and the technological people. The discussion had just started and was mainly about one of the nodes in their network: Res Artis. Res Artis is an organization that supports the needs of residential art centers and programs internationally through dynamic exchange of information and face-to-face meetings. Even though Res Artis was the main subject, the problem that arose was about networks and especially about network language. What language does an artist have to speak to get noticed and does it matter if someone can’t speak English at all? The most relieving answer might have been that art is a language on itself. Sadly everybody agreed that there are a lot of artists that will never be noticed as long as they stay within their own culture and use their own language. This answer might be a little bit disturbing but I was one step closer to my own goal. Every network has a language and everybody has to speak this language. For global networks, like the ones at Winter Camp, this means speaking English. 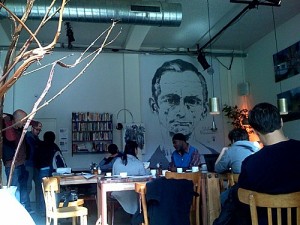 Ok, so every network uses the English language, that was not the big revelation I hoped for. So after the fD discussion I decided to step back for a while, clear up my mind and come back later when they’d discuss their presentation plans for Saturday. Again I started wandering around and tried to learn more about the other networks, that was easier said than done. Speaking the English language is one thing but understanding other people’s ideas and motivations is another. I found it really hard to get into other subject every time. In the short time I was with them, I grew attached to Free Dimensional but estranged from the other networks, maybe difficult to understand but the truth. Thus, networks are definitely more than speaking the same language only.

At 14.30 I joined the discussion of fD again. But they weren’t actually speaking about the presentation for Saturday as i thought. It was about the so-called problems between the different networks at Winter Camp. They felt like they were being talked into a conflict that didn’t really exist. Yes, there might be a difference between Dyne and fD but only concerning content. They’re both networks that are interested in relations, in bringing people together with the same ideas and believes. Every network is trying to make that happen, so a conflict is not the solution. Also, the clash between ideas creates new opportunities, so it’s not something bad it’s a problem solver actually. I was actually amazed that, from my point of view, the different networks still seemed scattered. Even after being together for more than three days now they still struggled with moving out of their own safe havens. For me this was disturbing, I felt like that the different networks could learn so much from each other but that the imaginative conflict held them back.

But right after the discussion something weird happened and my mind was set on something completely different. One of the members of fD suffered from food poisoning and I was the one assigned to take care of him and bring him to a medical doctor. Maybe it didn’t have anything to do with networks, but I actually came to an insight. From this moment I think I got to know what a network really means. It’s not about the language, about being open, about the content or about being different. Those are just side aspects which make an individual network stronger. No, it’s about being there for each other, that’s what all the networks have in common. They all help other people to become better at what they do and make a more beautiful world. Surprisingly, something stupid like going to a medical doctor actually made me think of the people behind networks everything became clear. The conflict is indeed non-existent every single network is there to help out others, no matter what ideas or motivations they have.

Back at Winter Camp, the end of my day there came near. After having a not so delicious meal (I hate pasta 🙂 I decided to join the Bricolabs viewing. Frekuencia Kolombiana, a documentary about the Columbian hiphop scene, then confirmed my final point. Not only the makers of the film wanted to be there for the oppressed population, to make people aware of their situation. Even the oppressed population in the movie takes care of each other. They’re one big network, no I mean, we are one big network. The documentary was a beautiful metaphor for the end of this day and I no longer felt like a lost soul, I was part of the network.