Edu-factory describes itself as a theoretical political machine for the just-in-time interventions in situations of crises. While for some networks the different languages and network-specific jargon used at Winter Camp sometimes caused problems during the plenary sessions it also opened up new ways of thinking. Edu-factory was delighted to hear the jargon of open source, human sciences, human rights, the NGO-sector and of those who advocate clear and accessible modes of education. 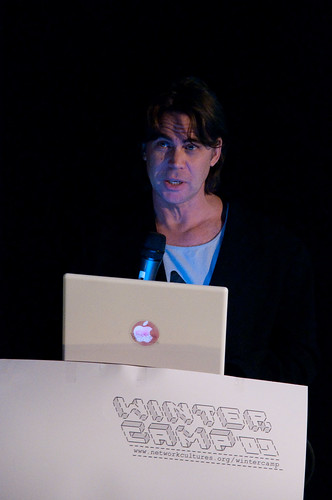 Edu-factory reflects on the dynamics of Winter Camp as a group and on what happens when networks meet face-to-face. What is the status of the term network itself, or is it a disposable term? Aren’t there better ways to describe some of the groups present here at Winter Camp? Is “network” the most relevant term? It also has to do with the network dynamics which can fall away when meeting face-to-face.

Edu-factory came across problems in their own internal process but came up with a series of proposals and steps to translate their activities out into the wider network. There are some dangers we perceive when acting like groups. Groups in the form of networks are often seen in two forms: the network as community or network as institution. Edu-factory is interested in heading for the network as an institution, or rather, a new institutional form.

They have made an inventory of specific events that can help them achieve this goal. They are doing their planning around four events in Brazil, India, Taipei and Minneapolis.

Networks often have various planes of activity: different email lists, websites, blogs, etc. How can these relate to each other, how do they communicate with each other and what is the hierarchy. There are verticalities operating within the Edu-factory network and the main question is how to let these parts develop on their own grounds? The Edu-factory web journal is an important method to build a trans-national institution and to organize information in different parts of the globe.

More information, goals and backgrounds can be found in the Edu-factory Manifesto.