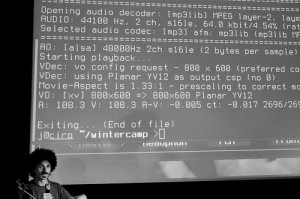 Based on an interview with Denis Jaromil Rojo

Dyne.org is a decentralized, open, nomadic and displaced network, that exists through and in cooperation with multiple networks. Dyne.org mainly operates like a fluid grassroot power, through institutions. This means that the network will and can never be institutionalized (because this would mean settling down). Jaromil, who founded Dyne.org in 2000, acknowledged however, that it is impossible to refuse institutionalization completely, most importantly because this would lead to the exclusion of certain resources. Dyne.org has chosen to become a foundation, which gave the network a solid base for activities and the possibility to work together with other foundations and institutions like Montevideo (who now offers server space). In fact, having a foothold as a foundation and working together with other art institutes also gave Jaromil the status of migrant instead of deserter.
The main purpose of Dyne.org is providing people, activists and artists alike, with free software (as in freedom of speech). They hope to share knowledge in any context, whether with state owned companies as well as NGOs, or with local indigenous people. Although having a disposition with institutions seems disruptive for a network like Dyne.org, this is not the case. Instead, over time it has proven to be very effective to weave through big, corporate and state owned networks. An example of the impact to act like such a virally weaved network can be found in the case of netstrike.it, when the people were asked to petition their opinion online. Because members of the Dyne.org network worked in state owned telecommunication corporations, they were informed of the government ordering this particular company for releasing the ip-addresses of people giving their opinion. This is how the network could prove that the 42 people that were arrested with charges of conspiracy and “subversive association”, were actually arrested for voicing their opinion on the internet.

Dyne.org aims to develop software that can run on old (or less advanced) hardware, to oppose the consumer approach. A lot of the members of Dyne have their roots in the demoscene (a subculture focused on maximising hardware with software). This has proved to be very useful in a society in which we have moved towards small power devices and ‘mini’ graphics, like mobile phone applications. Today we have to invest in really expensive processors. But not only buying these expensive machines means supporting this consumer society; the fact that while we are using our new and expensive machines, half of our CPU is pirated by blinky advertisements displayed on websites is both unfair and inefficient.
Another negative example of the globalized “fail” economy can be found within the videogame console industry, which right now is the biggest device industry. A problem with these technologies is that they are not open to learn, change, sell and resell. We cannot use them to re-appropriate content and more importantly, to create local economies. In comparison to televisions, whose technologies are fairly documented, open and standardized, game consoles are black boxes. We cannot open and repair them – it is illegal.
We need to realize that when we purchase an object, there should be no strings attached. For the purposes of a self organized, local economy, it should be illegal to close devices like it is done right now. We need to start being able to mod consoles with the help of mod chips and legalize modding shops in which we can buy and resell our home-made mod consoles. There is also an architectural issue to this point because right now, every city is starting to look the same. Our cities are hijacked by the same advertisements and big commercial billboards and store windows. If people could legally create mod consoles, they would be able to start their own shops and create their own, local pirate economies as well as a difference in the look of the town that is starting to obey a preset template architecture.

During Winter Camp, it was the first time that all the programmers of Dyne.org were involved and got to meet each other (except for kysucix). It is striking to see how so many different people at the same time share a common goal; a grassroot hacker community providing access to technology, education and freedom.
The background of the members is very diverse; they range from radio makers to humanitarian organizations, medical researchers and musicians. Their main goal in participating in Winter Camp is to connect all developers involved in free online streaming technology FreeJ, which is based on a new free codec (“Ogg, Theora”). FreeJ is a vision mixer, an instrument for realtime video manipulation used in the fields of dance theater, VJ-ing, medical visualizations and TV. It lets you interact with multiple layers of video, filtered by effect chains and then mixed together. The resulting video mix can be shown on multiple and remote screens, encoded into a movie and streamed live to the internet, all using free software and codecs. The project is sponsored by the Digitale Pioniers Foundation.

One of the members working on FreeJ is Asbesto from Sicily. Asbesto is in charge of Freaknet (the hacklab of Dyne.org) where he runs the museum of working computers (obsolete computer systems that have been restored into beautiful working order). I really enjoyed meeting him because over the last years I have come across more initiatives like this, notably the MO5 (paris), the Cyberpipe (Ljubljana) and I think the work they do to restore and document these old machines is often very underappreciated.
Also working on the FreeJ project is the Mexican audio / visual artist Vlax. His roots are a basic ingredient to everything he works for, which comes down to creating audio as well as video and the distributing of knowledge on media that facilitate the freedom of speech. During Winter Camp I found Vlax often busy with his microphone, because the many sound of Amsterdam (the First World he was ‘going to try to figure out’) were new to him. The sounds he recorded were beautiful and made me aware of my earlids (that filter out the sounds that I think are normal). After this discovery, Vlax told me about his reasons for being part of Dyne.org. He, alongside 800,000 other Oaxacans took active part in the rebellions against the exclusion of the indigenous population by the Mexican state Government (the most recent rebellions took place in 2006 and resulted in the death of 26 activists). By pirating state radio and television and starting new radio stations, the Oaxacans learned “to speak”; how to have a voice. Vladimir describes that now the Oaxacans have learned to speak, they need to learn how technology works from its source, so they can maintain having a voice. He is trying to create, translate and distribute this knowledge to make this possible in the future. Overall he works to generate and distribute new (old) sounds into the world.

In the final plenary session the network showed a visualization (made by Crash) from the edits of FreeJ software files from the starting point of the project (November 2001) until now. This video was very interesting because it very clearly shows the workflow on a central project and the major players taking part in the creation of this big project. But you can also recognize a demoscener attitute, which is often very competitive. Demosceneres or not, they are definately a very social network of people.
No Estamos Solos!