Bricolabs describes itself on its website as a distributed network for global and local development of generic infrastructures incrementally developed by communities. A global platform to investigate the new loop of open content, software and hardware for community applications, bringing people together with new technologies and distributed connectivity, unlike the dominant focus of IT industry on security, surveillance and monopoly of information and infrastructures.

In its decentralized and distributed final presentation (many male voices dispersed in the dark audience setting of the cinema) it felt like a journey to learn what Bricolabs had been going through over the past days. It seemed to be more of a non-definition than a definition.

As a starting point, the Bricoleurs had transformed the network image of Winter Camp into a mesh-network which they perceived more representative of their way of working. Like some other networks, Bricolabs found it problematic to define one network contact – or as Winter Camp described it, a co-ordinator – for Bricolabs it equaled to defining a leader – and in their opinion, representation of networks should be approached differently. 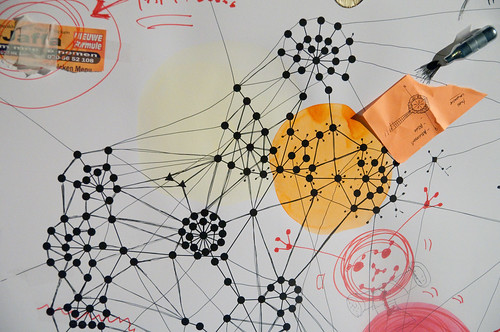 We don’t define Bricolabs, it would die. We describe it.
Bricolabs started and came together in a rather unplanned and spontaneous way and its final presentation mirrored that process. Its mailinglist membership is big (around 400 if I am not mistaken), and many of the Winter Camp participants and organizers are bricoleurs too.

Bricolabs is a network of autonomous actors, agents, with all sorts of organisations and groups involved. It shares a common instinct of things and methods, and not until the Winter Camp had seen a need to articulate these or clarify them. Rather than talking, Bricolabs is about doing; and who contributes to which part in this doing is not really relevant.

Back to the dispersed mystic voices in the dimly lit Studio K Cinema:

Nobody in the network needs a label, no one needs validation.
Bricolabs has no boundaries, it has a centre of gravity around which projects can happen.
Is it a network? If it is a network at all, it is an open network.
Is it a smell? What kind of smell? The smell of Palo Santo wood? Of Mandarins? The smell of home?
Is it a colour?
Who can define the future of Bricolabs?
Who can define its qualities?
Autonomy
Knowledge
Imagination
(BINGO!)
Harmony?
Empowerment?

Come and find out more about it… http://bricolabs.net/ 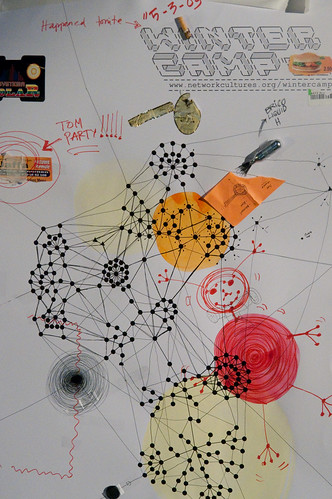