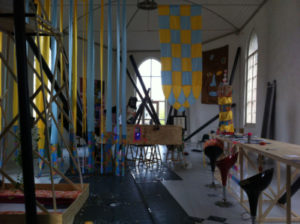 Tim and Katrein Breukers are artists in residence in Hotel Maria Kapel in the little Dutch town Hoorn. For a period of three months they have been researching  the work of the musician and good friend of their grandmother’s, Julian B. Coco (1924-2013), trying to find a connection between his work and person and the place of residency. They brought locals in contact with the music of Julian B. Coco and organized an exposition, which reflected those colorful and jaunty meetings.

The ‘Tribute to Julian B. Coco’ subsequently was the subject of the digital tool Debate Online, with which the Domain for Art Criticism aimed to give everybody involved in the exposition – including the artists themselves – a voice in the reflection on the work.

Two critics involved with Domain for Art Criticism, Manus Groenen and Daphne Rieken, followed the working process and wrote a report which is a mix of documentation, critical review and theoretical analysis. The voice of everyone joining in the debate could become part of their report.

Read the report Tribute to Julian B. Coco on http://debat.editthispost.com/

Supported by the Mondriaan Foundation and the Performing Arts Fund

This is a guest post by Axel Andersson, editor-in-chief of Kritiklabbet in Sweden. The etymological link between criticism and crisis (via the Greek krinein) has been explored extensively by critics. Given the varying results of this operation, one may state that it might even have become its own enemy. Is criticism in crisis? Well, criticism [...]