Gathering in the early 2000s 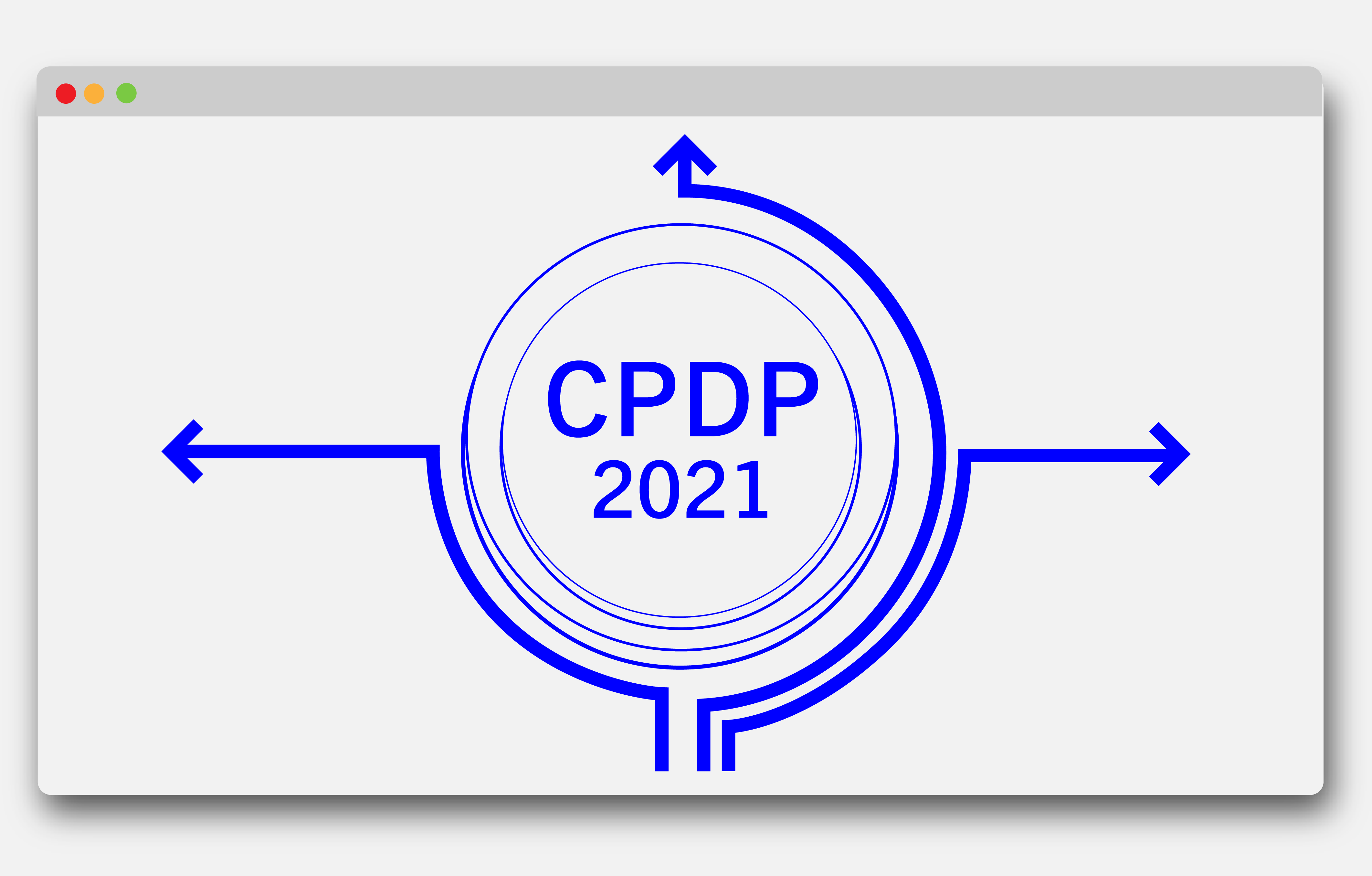 For Going Online, I research events on the internet: last January CPDP conference went online. The Computers, Privacy & Data Protection Conference normally takes place in Brussels, this year partly in a self-created application and partly in gather.town. As a multidisciplinary conference, CPDP gathers academics, lawyers, practitioners, policy-makers, experts from industry, and civil society to talk about privacy and data protection. I was invited as an artist-in-residence, presenting a work-in-progress during the conference. In this post, I’ll give you a tour through the two-dimensional conference space in gather.town, interwoven with insights from a conversation with the CPDP organizer Thierry Vandenbussche.

This tour starts at the entrance, as that’s where everything begins. Following the link in the ticket and after picking a username and avatar, your virtual self ends up in front of the grand stairs, leading to an impressive building signaling a large event space. Branded flags create sharp shadows on the facade, no matter the day or time, at CPDP conference it’s always noon. 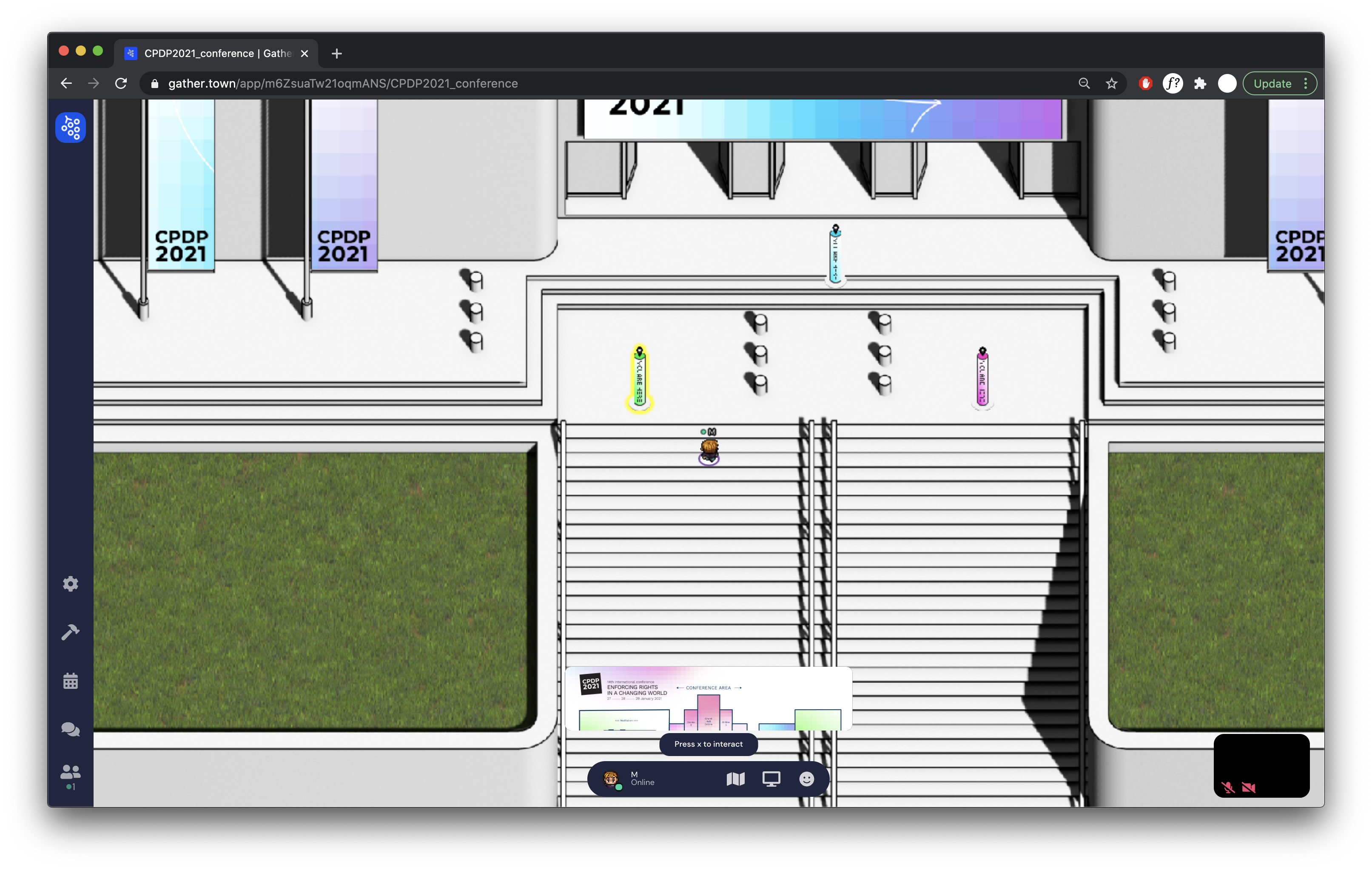 When walking into the main hall, wayfinding tells you where to go. Colored arrows point towards the leisure area, the meeting area, and the conference area. When I asked Thierry about the layout of the space, he said “A special phase in the process was to make decisions on the sizes of the rooms. Because if you choose a certain format, you have to extend that to the entire architecture. It started with the grand hall, which felt logical. All other spaces have arisen from the scale of that space.” It makes sense that central elements of the program happen in larger spaces – they hold larger audiences. This prioritizing in size helps to understand which program parts are central and which are more peripheral. 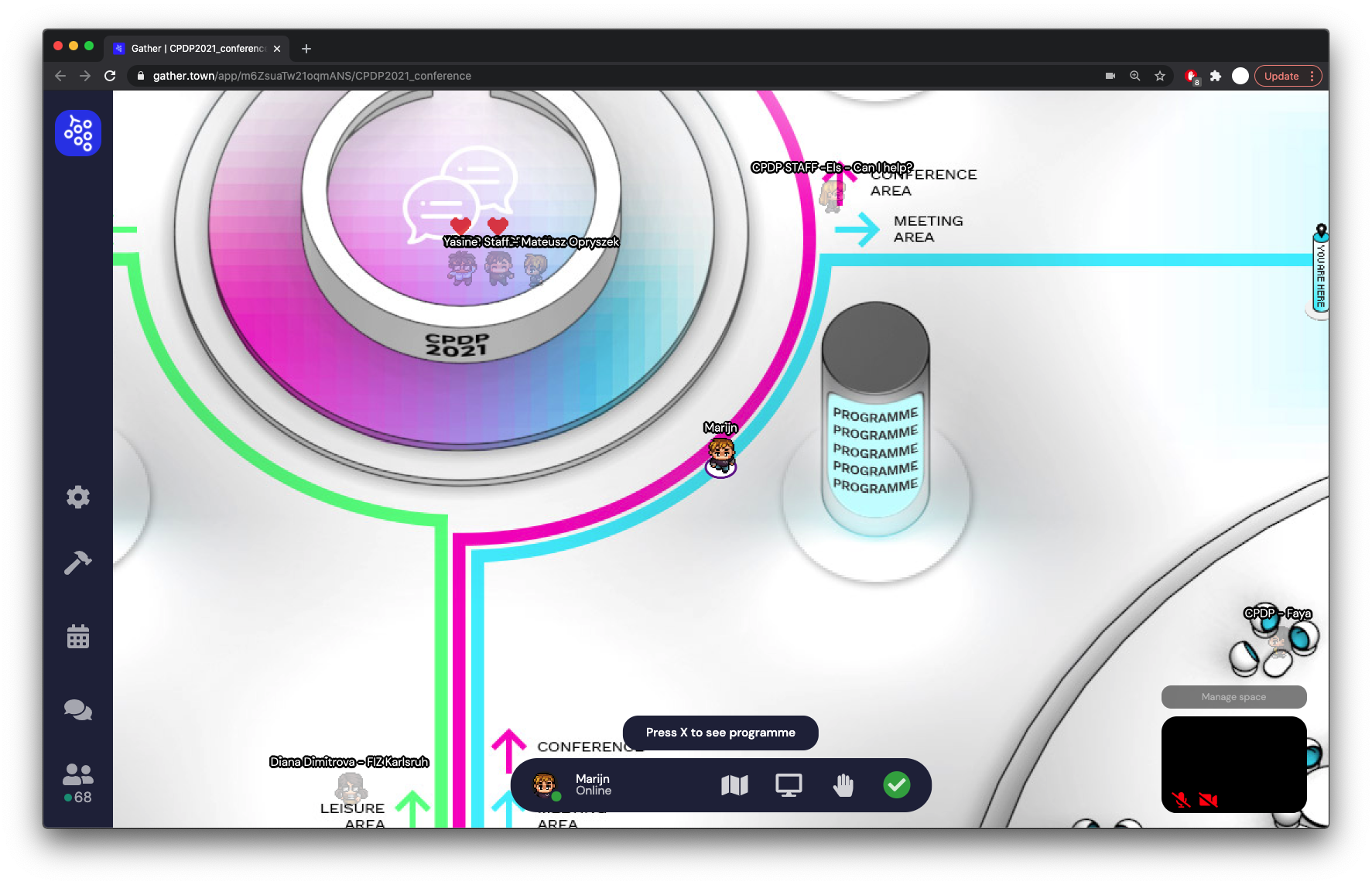 When I asked Thierry about the choice for gather town, he tells me about his extensive search for a privacy-friendly platform. “In the corona year I spent a lot of time looking for ideal platforms. Our standards were to have an open-source platform. Especially for the main program we wanted a platform that would be privacy-proof, that could function on European servers. We wanted as much as possible to be a good example for the community. I cannot say I’m 100% certain of privacy on gather, but we do not track people on this platform and we are not concerned with keeping statistics.”

Thierry emphasizes how privacy concerns seem to often come last in the choice for a platform: “I have noticed that little research is being done into the privacy and data protection aspects of conferences. Perhaps in the last few months, investigations have surfaced. I thought it was striking that no one cared, Zoom, Teams, anything. Nobody, not even in our sector, was working on it. Everyone just thinks about user-friendliness, how much you have to sacrifice for that, nobody cares.”

The space itself clearly recreates the classic conference spaces borrowing from its visual language. Thierry: “We wanted the audience to feel at home, so we chose not to deviate too much from a conference location.” The virtual space is made out of white walls, floors, and podiums, highlighted by the CPDP colors through seats, wayfinding arrows on the floor, and information pillars that tell you ‘you are here’ on the map – just as neutral event spaces are customized to the brand of the organizations they host.

From the grand hall, we walk to the leisure area in the west wing, consisting of the cinema, project galleries, artist galleries, an art bar, and a meditation room. Thierry: “My background is in visual arts, CPDP conference is very much an academic bubble. In gather, you have an even more bird’s eye view of everything – that helps in understanding how visual art and the professional privacy world can interact.” 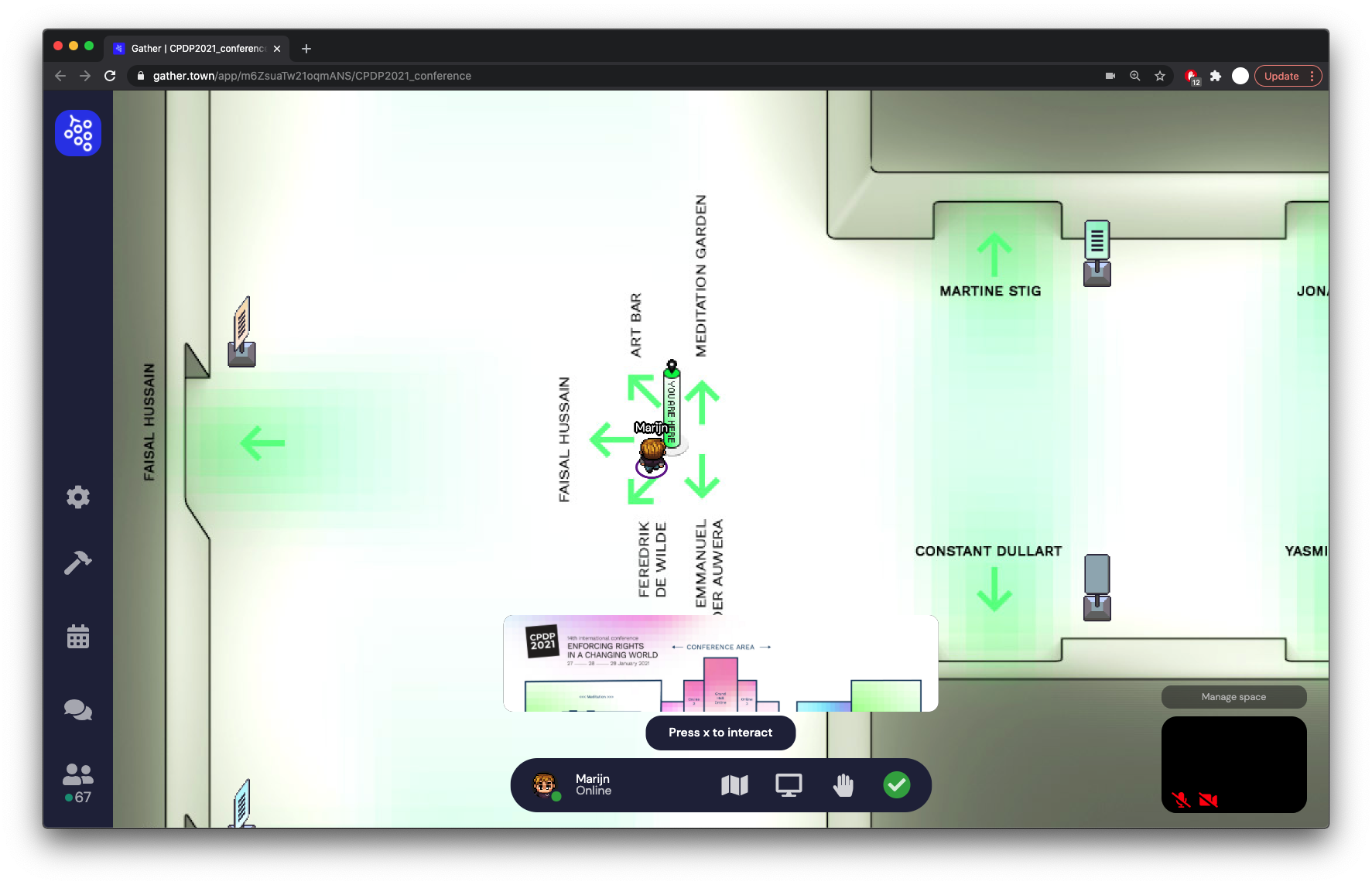 One such interaction happens within the artist studios and art bar, where artists and experts from different fields get into a conversation about their ideas and research. In essence, the artist studios resemble the concept of open studios: next to presenting work (with the freedom to transform the space completely), the studios function for organized talks and spontaneous conversation with the public.

On an evening during the conference, I was watching Netflix, unaware of gather.town still being open on one of my many browser tabs. Suddenly, someone started a conversation. Sitting on the couch in my pajamas, it took a second to switch back to the conference mindset. My avatar was still in the studio – the artist is always present. I ended up having an interesting conversation with an Indonesian designer about art and surveillance. She couldn’t watch any of the videos during the conference since Vimeo isn’t available in Indonesia. As an online conference, gather blurs the boundaries between private and public spaces (especially if mistakenly not logging off) – an interesting element in the conversation on privacy.

From the artist studio’s we walk to the project galleries, where various partners present their work. One of them is the artist collective Clusterduck presenting their project MEME MANIFESTO. They turned the white cube space into a playground, with plants greeting you upon entering, polka dot flooring, illustrations of the team members saying hi, a freezing Bernie in the corner, and a carpet to comfortably hang out on while going through the manifesto. 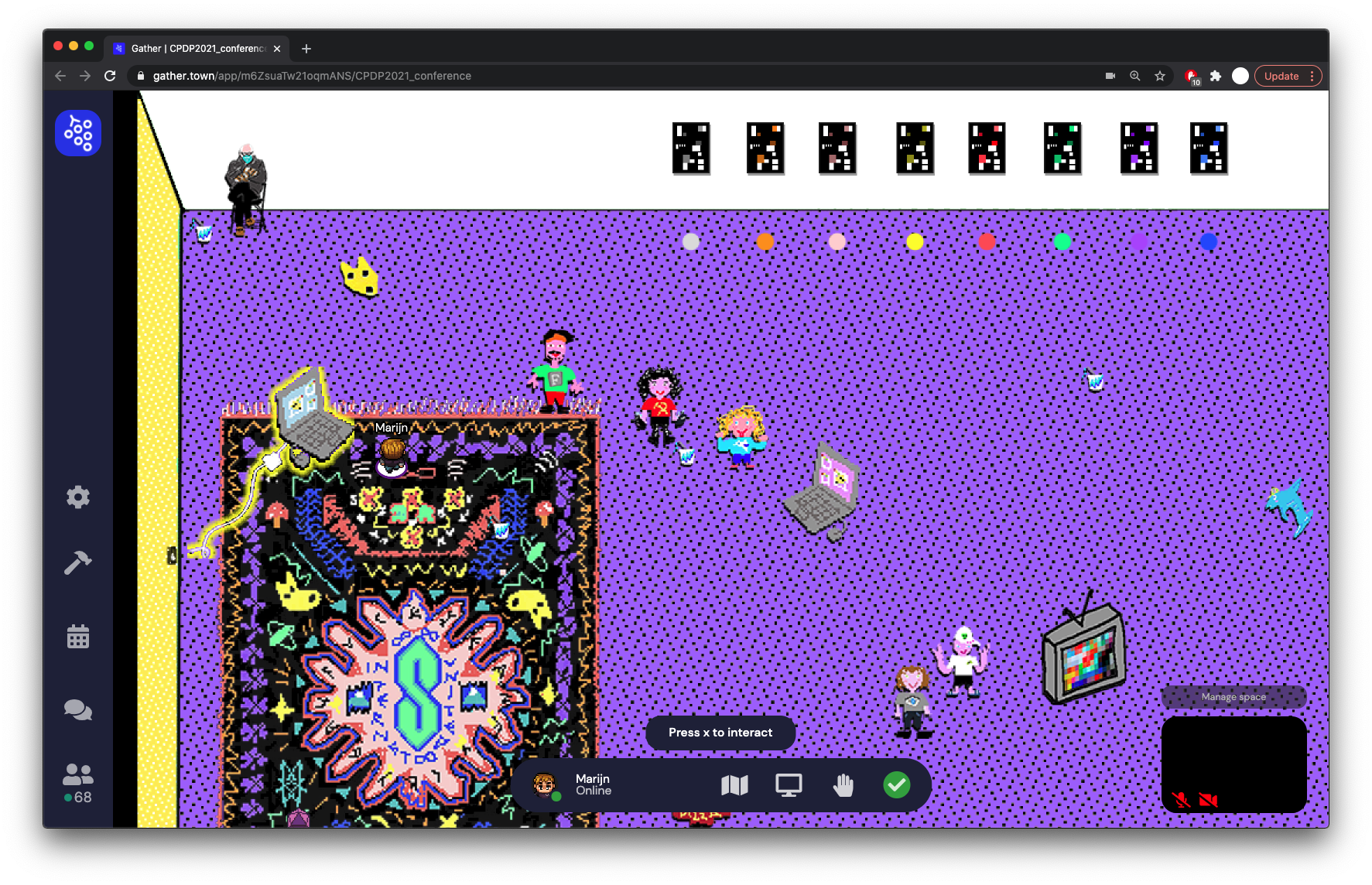 Moving from the leisure area, walking straight through the main hall, we arrive at the meeting area. It takes a while and some skillful pressing of the arrow keys on the keyboard to arrive at the spot. The meeting area has break-out rooms, an auditorium, and booths by sponsors and partners. The distance between spaces creates a clear conceptual separation – artist studio’s (including Jonas Staal’s collective action lawsuit against Facebook) and representatives of Google, Facebook, and Microsoft are on opposite sides of the building. 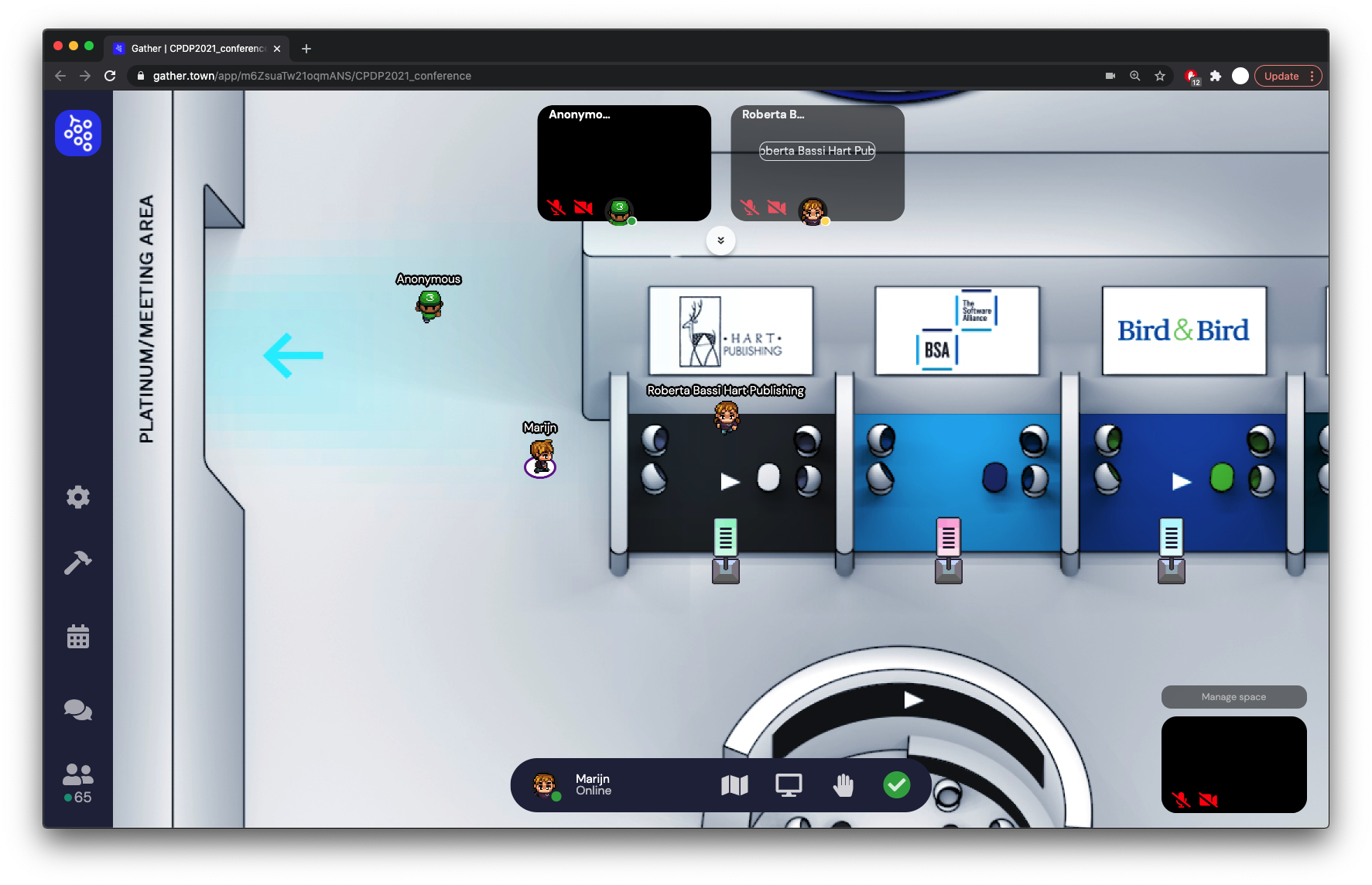 The interaction within the platform is similar to what we’ve seen before at other virtual events: you pick an avatar, and can (un)mute sound and turn the camera on/off. Interestingly, gather is set up spatially. When you’re close enough to someone, you can see and hear them and have a conversation. Just as in the world outside of the screen, you can walk in and out of conversations. Within the conference, there were various adaptations on this basic interaction: private seats that were only to be heard by the ones sitting at the table, or public stages broadcasting to the entire room. Interacting outside the dreadful Zoom grid feels natural. However, the technology isn’t always smooth, leading to glitches and a lot of ‘can you hear me?’-moments.

Walking through the Platinum Area, passing through the Premier & Event Sponsors room, we end up at my favorite space of the conference: the forest bar. Amidst smoothly textured grass and pixelated pine trees, the forest bar is an intimate place to catch a drink and have an informal conversation, much like a forest cabin. 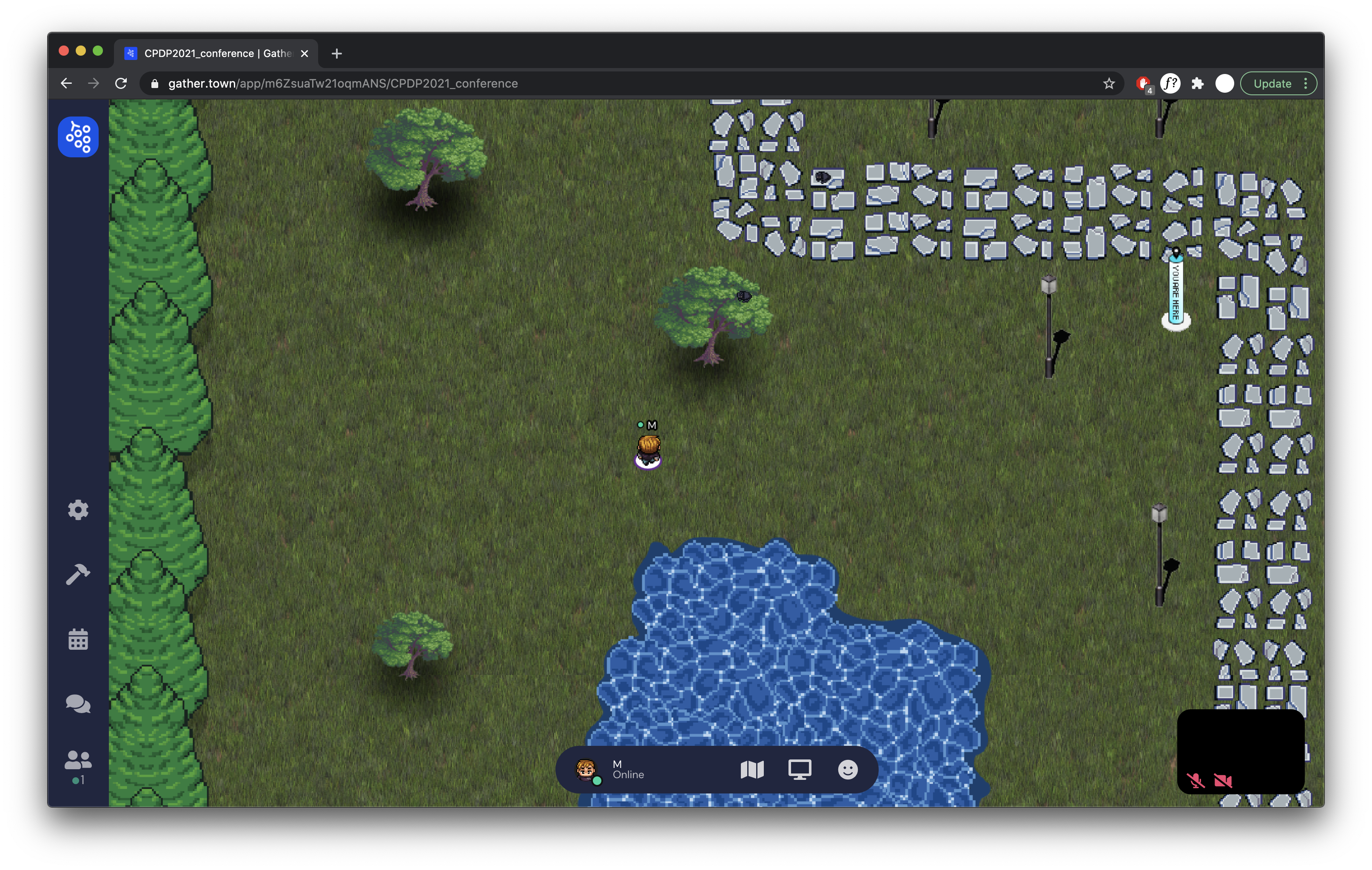 In one of the wrap-up conversations at the end of the conference, someone commented on the social elements of the conference, saying “I feel like I’m in my home office, but everyone else is at the conference.” Our physical realities of constraint to the home are undeniable, yet feeling as if you are somewhere together gives some hope. In the same conversation, the much sought-after element of serendipity came up. “Normally at CPDP, I run into people in the hallways, turning into interesting anecdotes. This year I similarly could run into someone unexpectedly.” Being able to see who else is there (if people chose to reveal their names/camera’s/etc) shows you’re not alone. 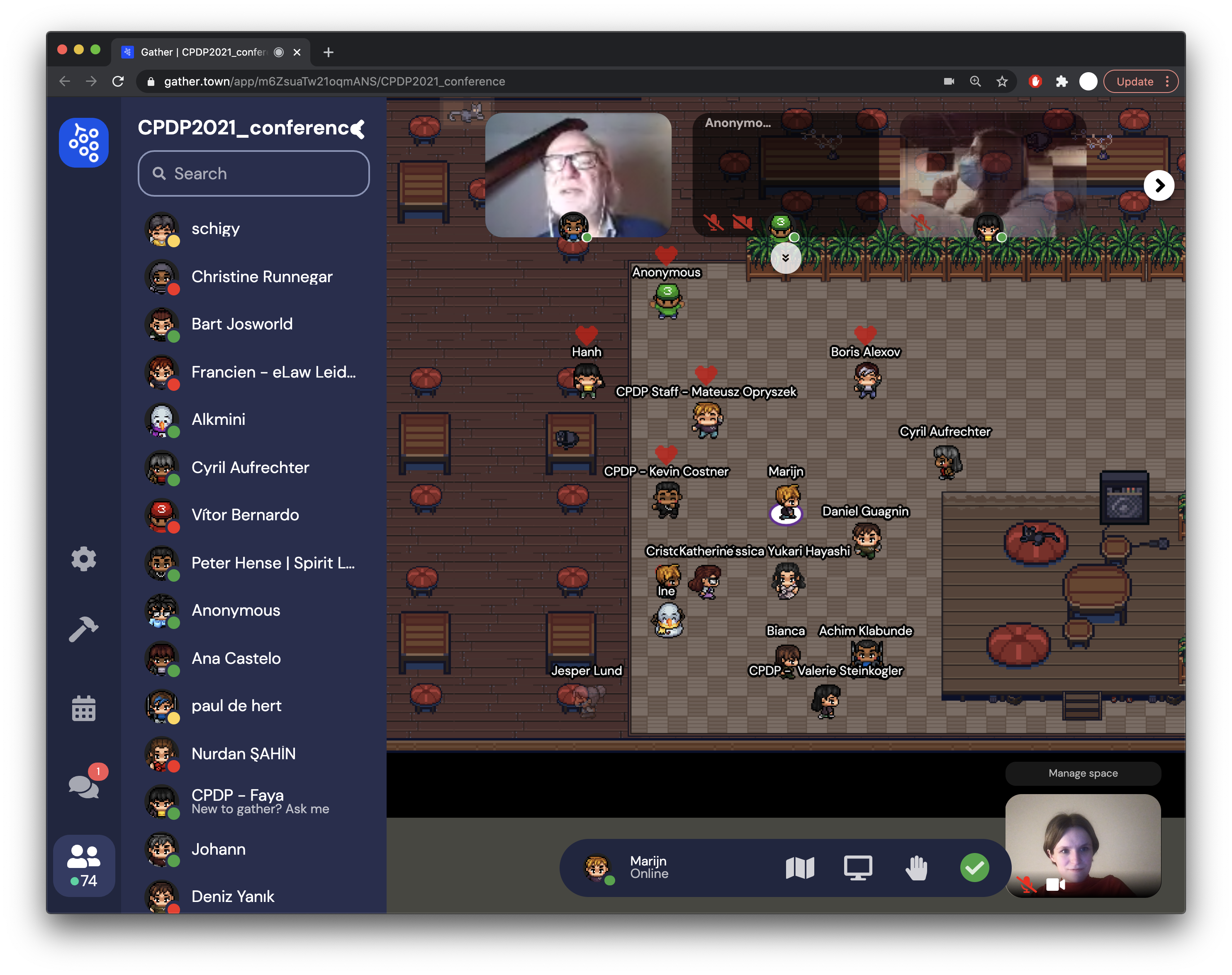 Although there is always some awkward figuring out of the social rules in these new platforms, the playful character of gather creates a light-hearted atmosphere. Hierarchy seems off the table and anxiety before starting a conversation with a big speaker fades away when you see them in space as a pixelated snowman or Mario character.

From the forest bar, we walk back, through the grand hall, to the conference area. As the conference’s main program happened outside of gather, these spaces function as teleport points to bring you to the right ‘room’. In various rooms, the lectures and panels of the conference are streamed, the audience can join in via the chat. 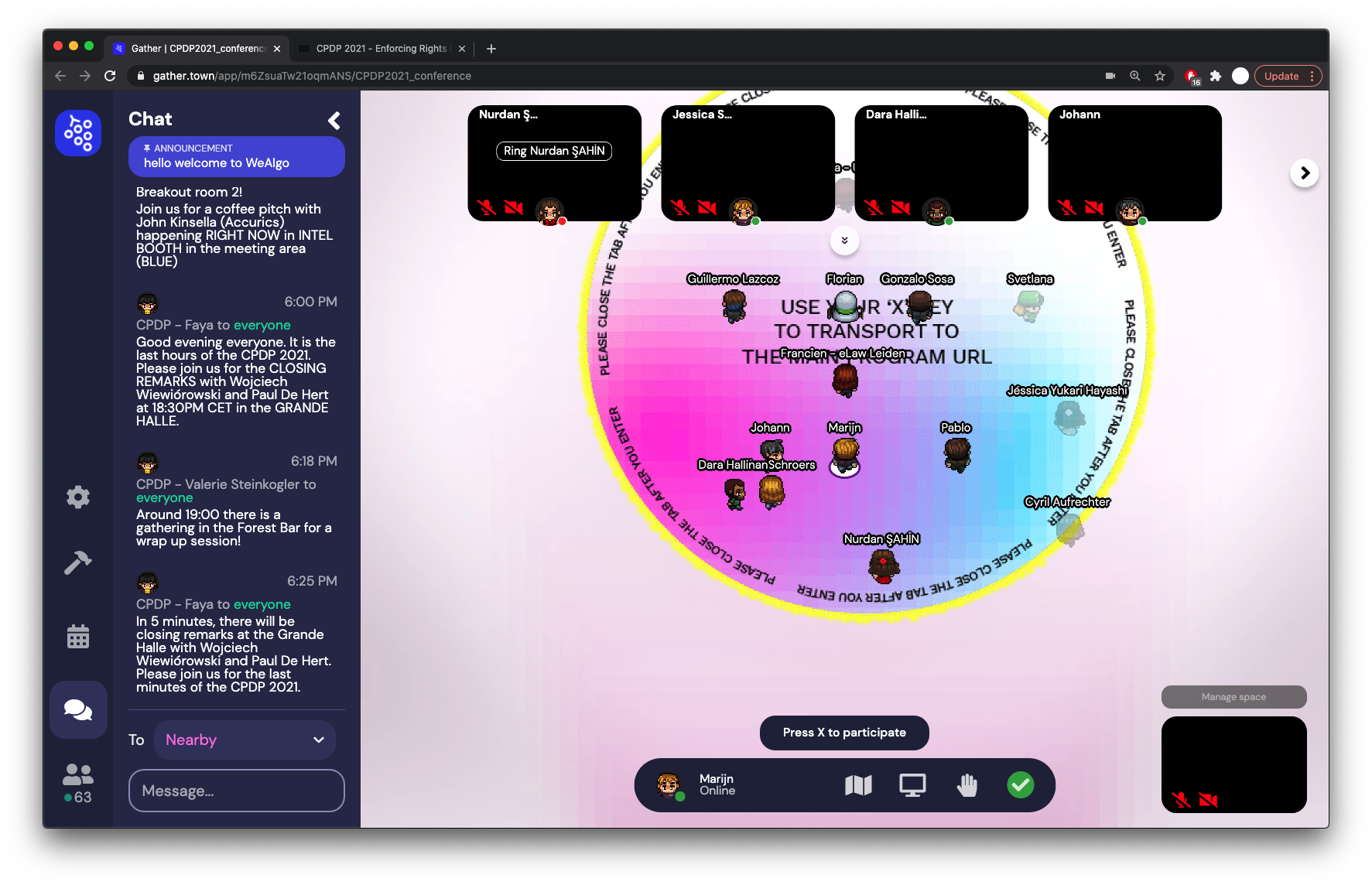 A recurring question of online events is the ability to reach a global audience. Thierry: “There was some criticism from the public that CPDP was Eurocentric. In terms of content, too few questions had been asked about privacy issues in other continents. We are consciously trying to break through Eurocentrism. Next year there will be a CPDP Global, a hybrid platform with satellite events in Asia, Africa, and Latin America. Time zones are by definition a problem if you want to reach and involve other parts of the world as well.”

A clear advantage to hosting a conference online is that you don’t have to fly anybody in. Thierry: “This year, we had Tim Cook as a speaker. He usually only comes out to speak to the public twice a year, and he chooses to do that with us. That would never have been possible in a non-virtual year. CPDP Global must continue to make things like that possible.” Although the dream of global online events might have been too optimistic – people can’t easily join a day-long program that is entirely out of sync with their time zone – there are more possibilities to have international guests than before.

All in all, gather town might not be a perfect platform for a conference (as perfect virtual platforms are still yet to be found), but definitely an interesting one. Amid zoom fatigue and an overdose of live streams, gather town creates natural interactions and allows for a playful and explorative approach – making it a good place to gather in between talks and panels. CPDP Conference 2021 makes an interesting case for gamification of the conference format.

Towards a Toolkit for Going Online

In this research blog, I’ve collected conversations with artists, designers, curators, and program makers about what it meant to ‘Go Online’ as a cultural event. We spoke about metaphors, strategies and experiences – specifically zooming into questions of audiences, interaction, serendipity, contextualization, privacy and much more. At the end of every conversation, I asked: ‘What [...]

A Conversation with Veronika Liebl For Going Online, I ask designers, curators, and program makers about the events they’ve held online. This time: Ars Electronica. From the 9th to 11th of September 2020, the festival was held under the theme In Kepler’s Gardens – a nod to the astronomer Johannes Kepler who developed Kepler’s laws [...]