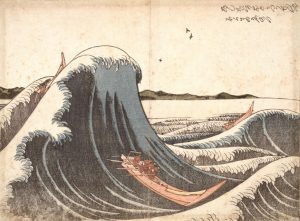 Thought can be structured in different ways, just like the web itself – it can be centralized, decentralized or distributed. The way of structuring impacts thought itself, which is why such structures deserve more attention than they usually receive. We need to be working on our thoughts. In our research group we try to make this notion practical by directing our attention to modularity as a publishing strategy, necessarily accompanied by an approach of relationality (between modules).

Working through our ideas for somehow realizing the vision of a new kind of digital publication, our thinking was sharpened by the following scholars, theorists, and practitioners. Two concepts have functioned as guiding stars in the sky while thinking about the vision of this research: the ‘carrier bag’ as formulated by Ursula Le Guin and the ‘hyper essay’ of Peter Sloterdijk. The critique of modularity as formulated by Janneke Adema, Gary Hall, and Tara McPherson have been very insightful. McPherson also provides practical points to take into account, as does fellow urgent publishing traveller Paul Soulellis. Needless to say, this overview is very limited and our search is still ongoing, we’d love to get more input for further research. (For more inspiration, also see the posts on Best Practices.)

In The Carrier Bag Theory of Fiction (1986) Ursula le Guin travels back in literary history to develop a radically different approach to storytelling, right from the very start. Stories have always focused on the hero slaying the beast. Why not ask what those collecting seeds and fruits have to tell? The carrier bag story opposes ‘the linear, progressive, Time’s-(killing)-arrow mode of the Techno-Heroic’ in favor of a story ‘full of beginnings without ends, of initiations, of losses, of transformations and translations’.

Changing the narrative means changing power structures. We cannot talk about urgency in changing certain societal issues without also thinking about how we are talking and writing and arguing ourselves. How do we carry our ideas? The carrier bag opens up avenues to challenge myths of origin and originality, authoritarian authorship, single-voiced narratives, hero perspectives, and definitive truths. Is a ‘Carrier Bag Theory of Non-Fiction’ possible, shaping publications that hold grains of knowledge and experience of various kinds and species, which can be laid out in different ways and directions? How would these forge meaningful connections and complex relations between contents, people, places and futures?

It is interesting to see what happens if you take the image of the carrier bag quite literally, as is possible in a digital environment, that has many beginnings without ends. In a digital publication conceived as a carrier bag one could collect many parts and content modules, that might interact in new and surprising ways among each other and with the reader. This seems to chime in with the notion of modularity as a strategy. Moreover, it gives modularity a critical weight, as the carrier bag not only conceives of a new form but also of a new type of message, relating the issue to what we call urgent publishing.

Peter Sloterdijk develops the notion of a ‘hyper-essay’ in this speech from 1993. Essayists are writers who are used to handling multiple perspectives and resist the urge to find definitive answers. Hypertext changes the possibilities and position of the written text and its writer, giving the essay even more opportunities to flourish.

The increasingly complex world calls for a complex form, moving beyond linearity towards a text that resembles more a cloud. Knots, nodes, and intersections take over center stage. Instead of beginnings and ends, this essayistic form is overflowing, ever expanding, pouring out. The author is a navigator in this sea of references, quotes and thoughts. The most important element of writing is selecting and instead of making a linear argument about all the different inputs, the writer shows how the selection process took place and what possible pathways it affords. (See also this deep dive into the ideas behind interactive fiction: Non-linear publication tools)

Over the course of our research we encountered some necessary critiques of our idealized visions.

Posthumanities and the Critique of Modularity, Janneke Adema & Gary Hall

At the Urgent Publishing conference, Janneke Adema and Gary Hall formulated a thoughtful but fierce critique of modularity. Modularity, with its roots in computer programming and as theorized by Lev Manovich, focusses on discreteness, standardization, and subsequent shareability. It functions well in a cultural industry that is highly commodified and that favors snippets over complexity. Rather than following such modular logic, we should try and develop other models of publishing. Especially when it comes to in-depth content it is important to think of other possibilities that respect process and quality.

Adema and Hall put forward a different publishing model that emphasizes relationality, rather than the finished object. It asks how a publication comes to life, grows, and moves. Who are involved in the process and how do those actors – human and non-human – relate to each other? What are alternative ways of gathering and binding information? Instead of working towards a finished object, they argue that we should think about how, where, and why boundaries between content are drawn, for example, or when a ‘cut’ is made in the publication process, and by whom, thus deciding when to present something in a certain form. These boundaries and cuts could be imagined to take place in different places, at a time earlier in the research process, or shared between a larger group of people (e.g. including readers).

This would also allow the book as we’ve known it for so long to take on different forms, generate other forms of authority, and make different kinds of knowledge possible. We cannot maintain a critical stance towards ‘old’ forms of publishing and writing, without changing the formats and presentation of that critique in itself (see also Adema’s & Hall’s essay about the Posthumanities).

Tara McPherson (also referenced by Adema and Hall), develops a critique of modularity that goes into the heart of computation. In her article Designing for Difference she unravels how code itself functions as ‘a realm determined by math, physics, or reason, apart from the messy realms of culture’. In her book Feminist in a Software Lab (2018), McPherson elaborates further on the question of modularity, computation, code, and the cut.

The model with which code is generally understood, McPherson writes, underestimates cultural influences and prioritizes modularity over relationality or complexity. Looking at coding from the perspective of ‘the stack’ means focusing on these discrete compartments and individual layers instead of on the connections and traverses between them. Moreover, McPherson argues that discrete, simplified, and reduced bits of code correlates to certain tendencies in society and culture such as discimination, making the search for different tools and models especially urgent. For example, interpretative analyses do not fit naturally with database structures.

McPherson follows Karen Barad’s idea of the ‘agential cut’ to think of other conceptualizations of code, and thus, of cultural productions that use computational logic (such as publications perceived as a collection of modules). The cut, as stated above, is a decision that is made, which makes it important to know why and from where someone is doing the cutting. The cut is not intended to standardize, as happens when working towards modularity, but allows for difference. The big question, according to McPherson, is thus how to design digital tools that allow for such differences. The Vectors journal and the Scalar publishing platform that McPherson is involved in, are examples.

Designing for difference means designing for ‘potential futures and becomings’ – concretely speaking, allowing different pathways to open and foregrounding the collaborations between different actors in the production of a publication.

Some practical guidelines for new ways of digital publishing can be extracted from Feminist in a Software Lab:

Paul Soulellis teaches and produces new publishing methods and strategies, among others under the moniker of ‘Urgentcraft’. His practice goes against the grain of the neatly divided database, perfectly bound-up book, or continuous feed of the post. He seeks how to balance fast publishing on urgent topics with a queer perspective that turns away from the focus on success, that might be conceived of in terms of revenues, clicks, followers, or other quantified measures. An ‘abundance of meaning’ is aimed for rather than a growth of engagement; the network around a publication is appreciated more than the ‘weak ties’ that might be called the audience.

Soulellis’ talk on Urgentcraft (2019) ends with a list of possible tactics for urgent crafters, that echo others mentioned here, such as: ‘Practice a slow approach to fast making’, ‘Acknowledge complexity and contradiction in making’, ‘Resist design perfection / stay with the mess’, ‘Fail to provide the perfect read (resist legibility)’, and ‘Prioritize communal care as a never-ending practice’.

Find all the tools and methods that were developed during the Making Public project here: Urgent Publishing Toolkit Parazine is a tool that allows you to recontextualize existing academic content. It scrapes the content from an online academic journal of your choice and allows you to create a ‘zine’ from this content. You, the source [...]

Brief explanation The Platform 2 Platform prototype is composed of two layers: a database collecting the articles from the connected publishers, and a matching algorithm to suggest connections between them. A third layer is added to this by editors reviewing the algorithmic suggestions and deciding if those links are meaningful or not. While the first [...]