When it comes to printing a book, Print-On-Demand (POD) is an interesting option. However, there is a lot to consider to get the print right and end up with the book you have in mind. The book Satellite Lifelines: Media, Art, Migration and the Crisis of Hospitality in Divided Cities by Isabel Löfgren is published by Institute of Network Cultures. Comparing how the print turns out when it’s done by the Swedish POD service Publit or the American Lulu Press results in the following reflections.

In all cases, it’s nicest when you can make use of local companies in the production chain of a book. Isabel lives in Stockholm herself, the Stockholm based Publit makes for a logical print on demand service. The print I’ve received from them was sent by mail from Malmö, where the printer ExaktaPrinting AB is located. 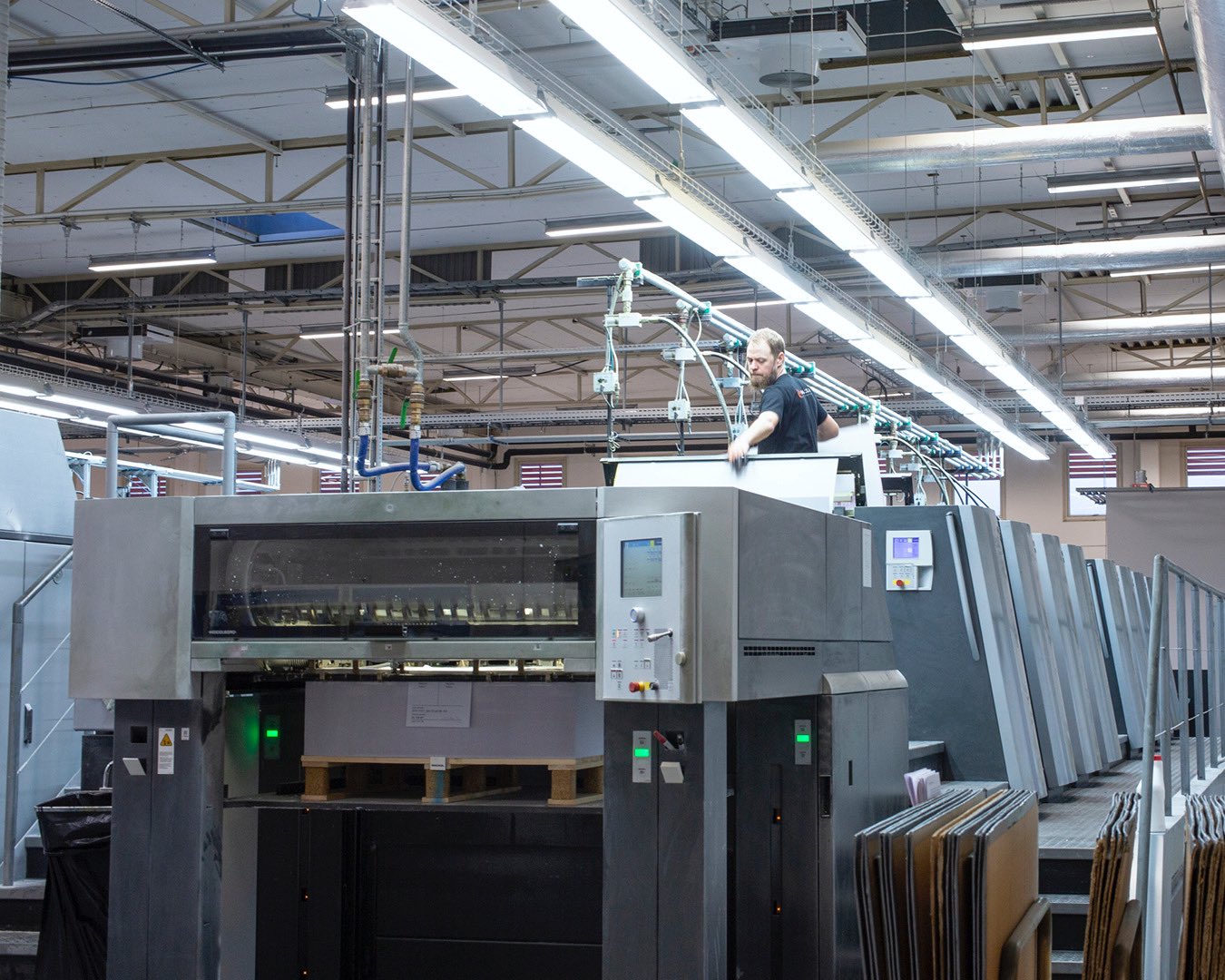 On the other hand, Lulu’s headquarters is based in Morrisville, USA. Following the DHL tracing information, the books are shipped from Poznán in Poland. (Except for this article that announced Lulu’s new printer in Australia, the company is incredibly secretive about where they get their books printed.) 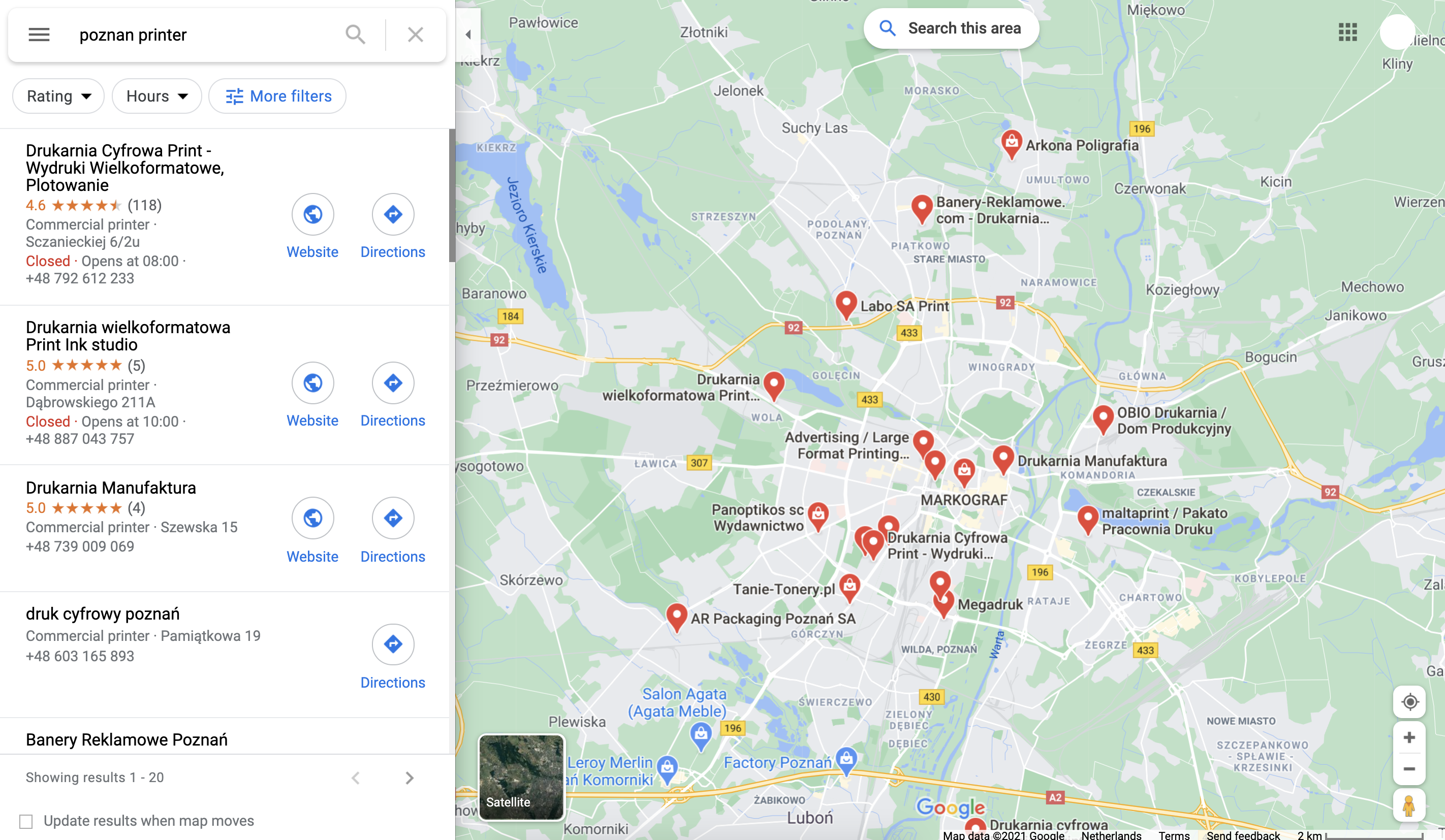 Poznán knows many printers – which one actually produces Lulu’s prints remains a mystery.

Shipping costs vary greatly between the two different POD’s. Publit’s shipping costs depend on weight and delivery address – the book is 584 gram and would travel approx. 850 kilometers to Rotterdam – running the shipping price at 295 SEK (29,10 euro). A quick search tells that shipping within Sweden is much cheaper; it would cost 71.76 kr (€7,06) to send the book back to Stockholm. Other Northern European countries have similar shipping fees the Netherlands (Denmark €23, United Kingdom €29). Shipping to Brazil, where the writer is from, would cost €63,78. The same print from Lulu ships to Rotterdam for €4,84 (with additional taxes of €1,75).

It’s important to be able to get in contact with the POD customer services – for whatever questions that come up in the process of publishing. Publit has great customer support, responding very quickly and thoughtfully to all my questions, ranging from preparing the files to detailed questions on how the print turned out. Lulu is known for not having great customer support. After a test print cut off 1 cm too many of the book, they did respond rather quickly and sent a new print free of charge (although in black and white instead of color, one step forward, one step backward.) 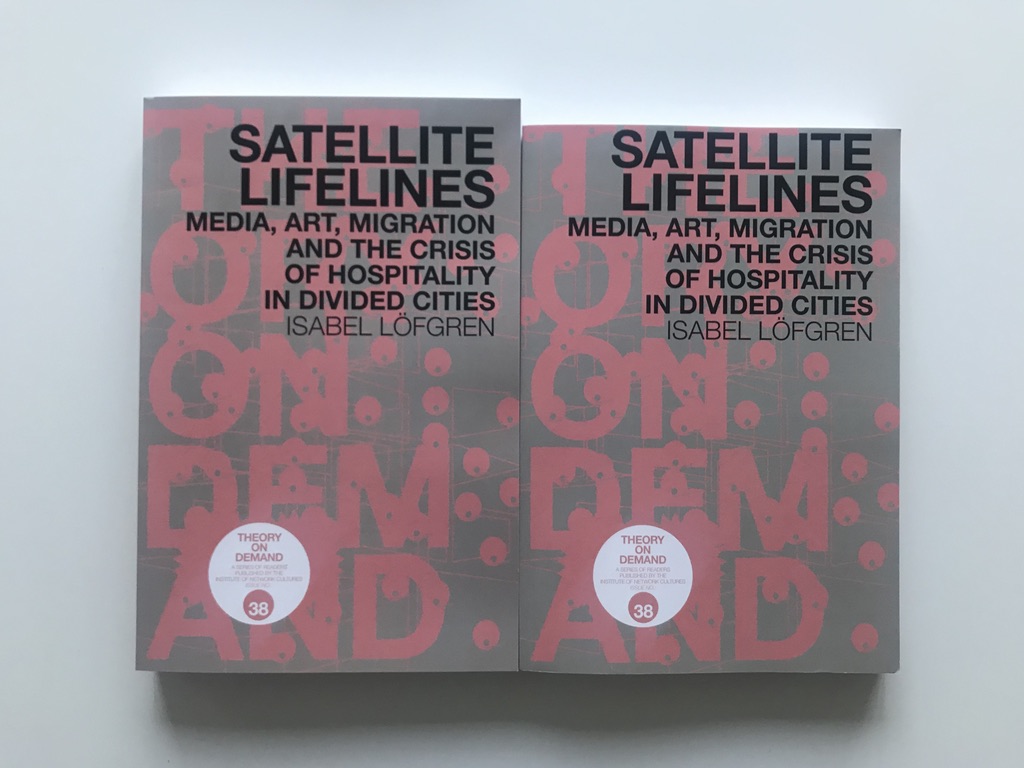 Lulu’s print mistake, ‘trimmed in excess of our accepted variance’.

And the most exciting question: which print turned out better?

The Publit print: yellow-toned paper and a structured paper cover (pictured left).
The Lulu print: color standard on white paper with a matte finish of the cover (pictured right).

Publit: The structured cover is very beautiful, the colors of the pattern look great. The paper is a nice thickness and the un-printed inside of the cover works beautifully. One possible downside is that the print wears off on the edges, which could be solved by getting a laminated cover instead. It can also be embraced as part of the type of the paper.

Lulu: The cover overall looks good. It’s a smooth print, the matte finish looks nice. The particular colors of the pattern aren’t as fresh as the Publit print. The paper of the cover is rather thin, and is shiny on the inside. On both prints I’ve received, the back of the cover seems to have ‘bubbles’, the paper isn’t fully flat. 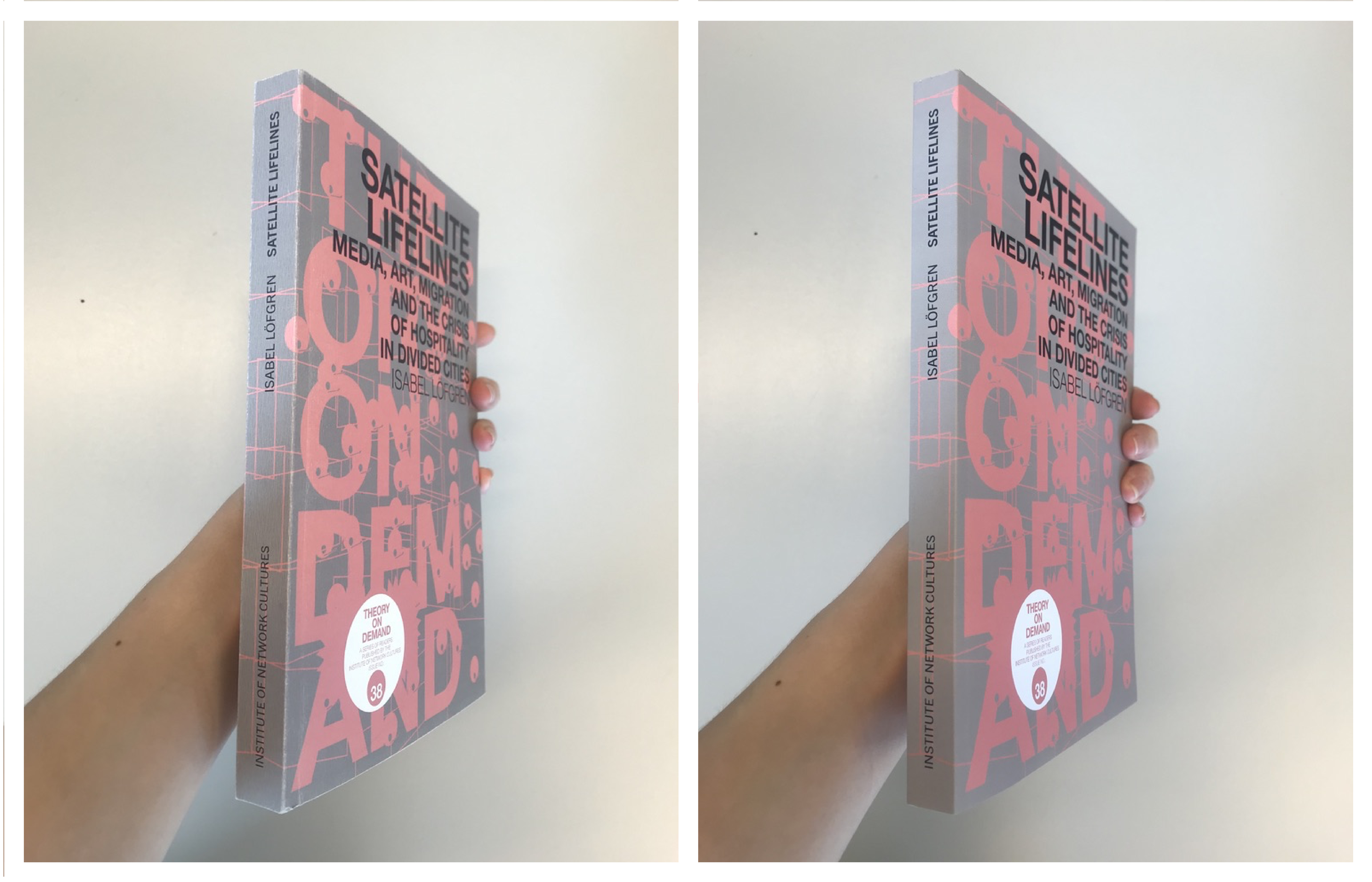 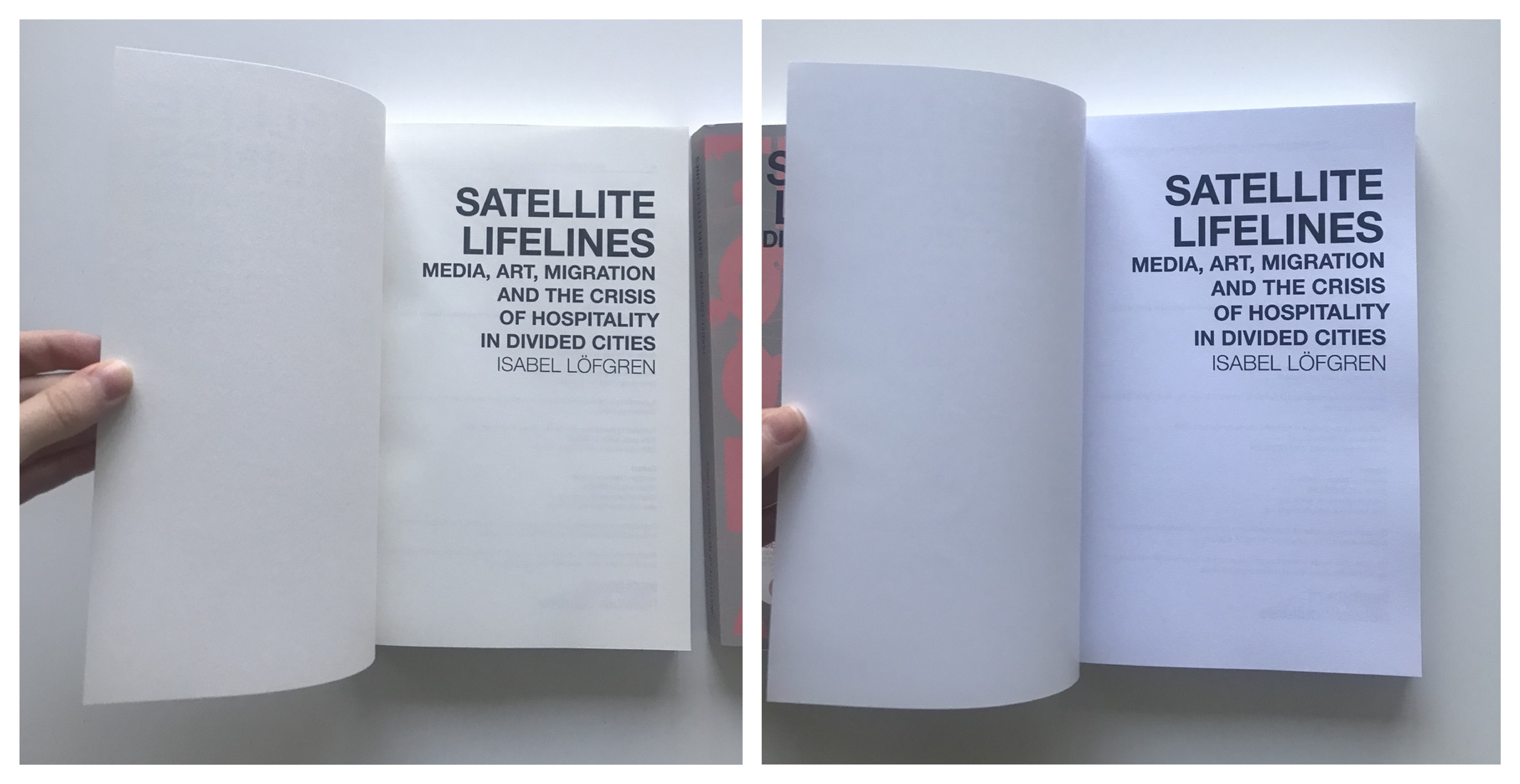 Publit: Overall, the binding looks good. If you look up close you can see the glue in between the cover and the first page. The books opens easily and doesn’t seem to damage after opening it.

Lulu: The pages are glued neatly – no glue rests to be found. 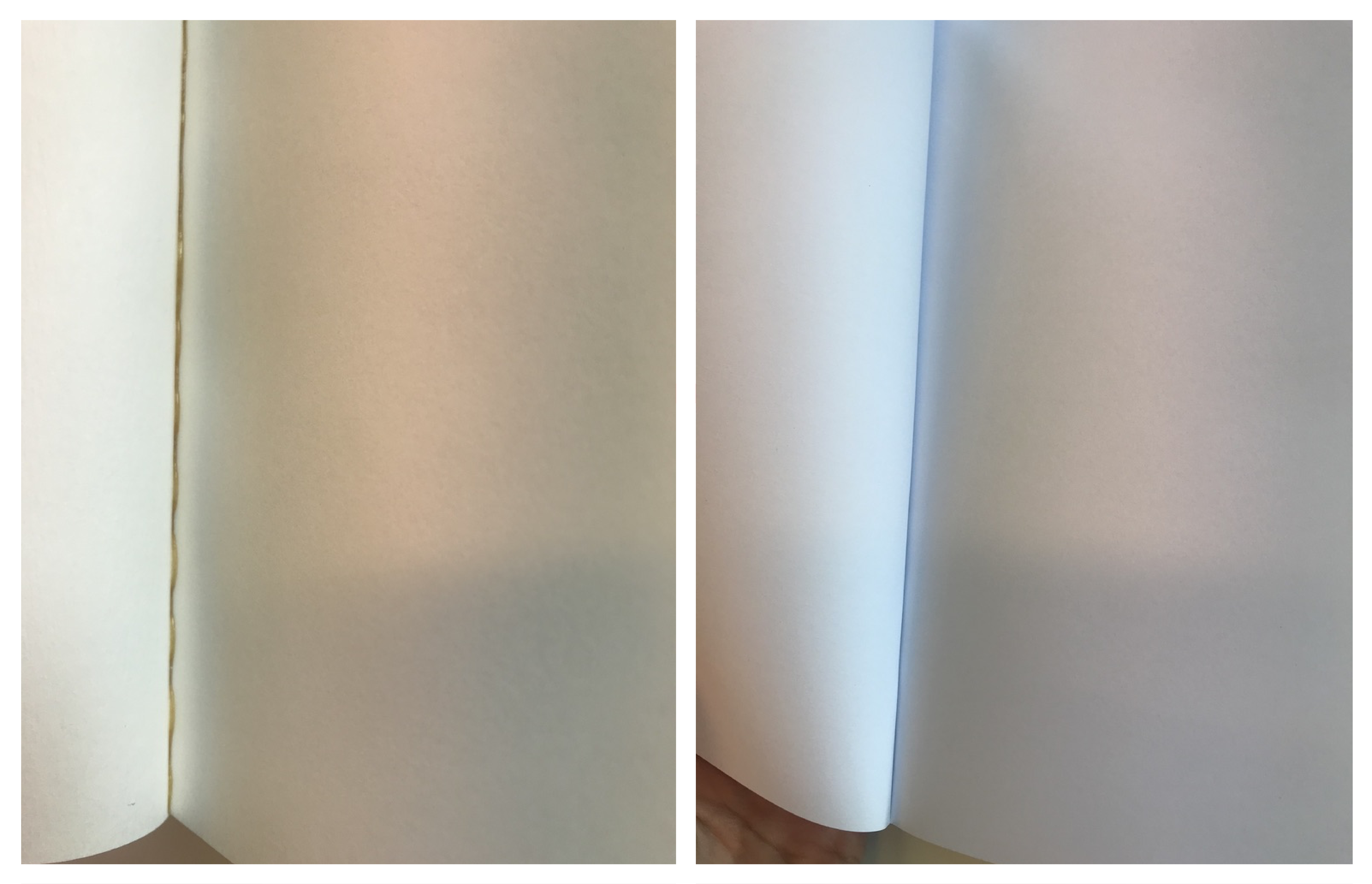 Publit: The text is easy on the eye. Especially the black and white pictures of concrete buildings looks beautiful on the yellow toned paper.

Lulu: The print overall looks good, but the paper doesn’t lend itself as beautifully for images. 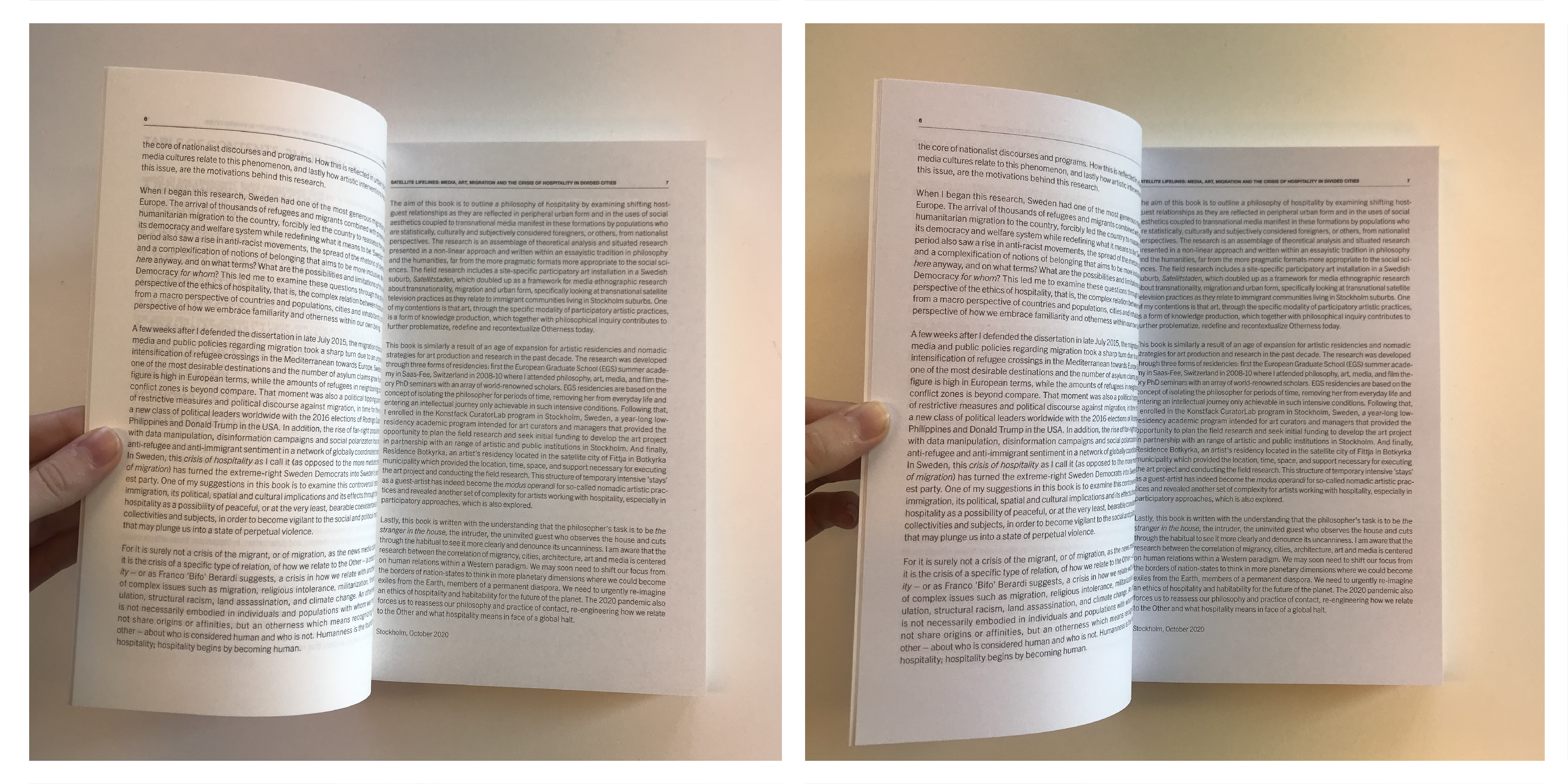 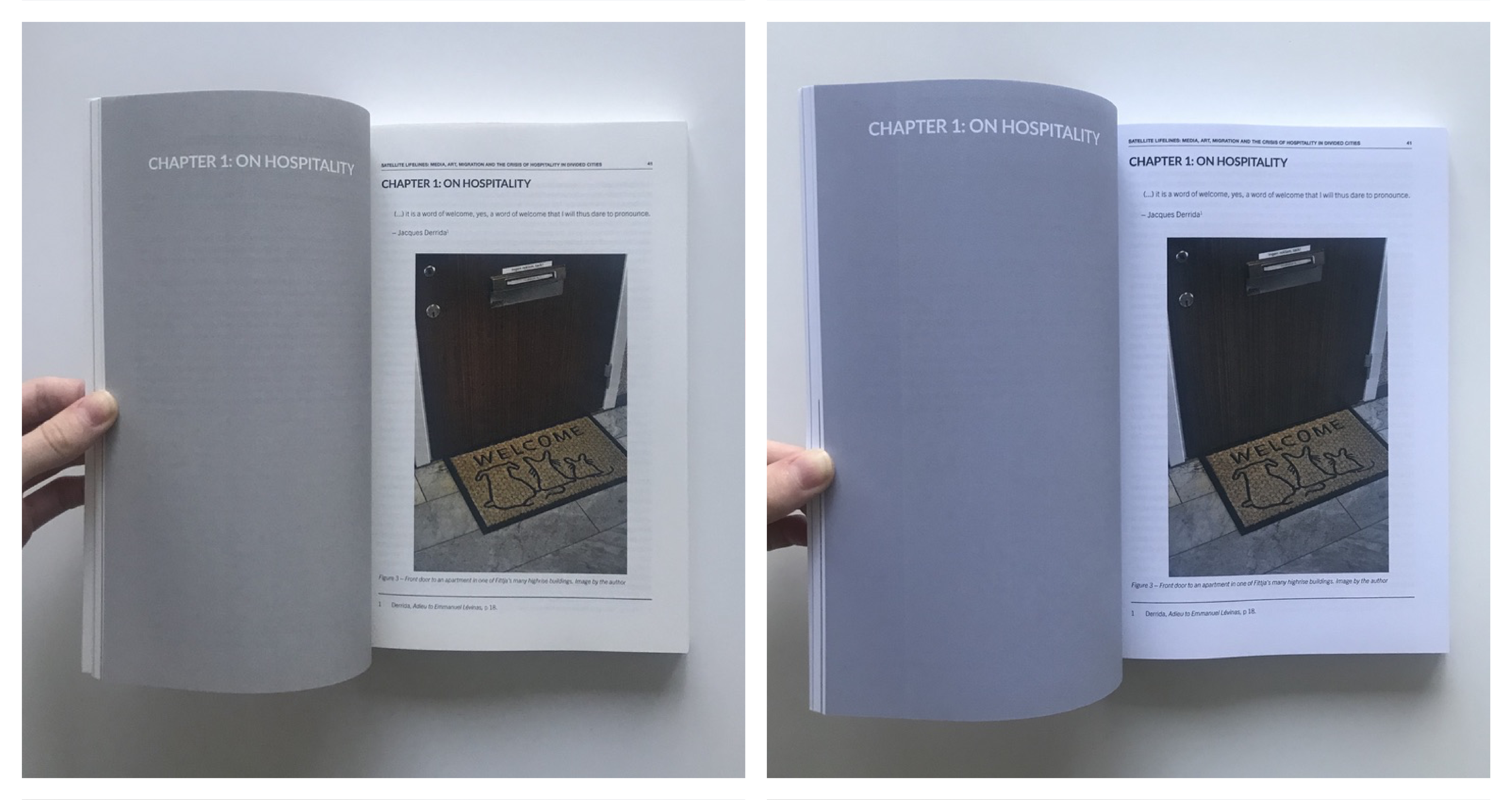 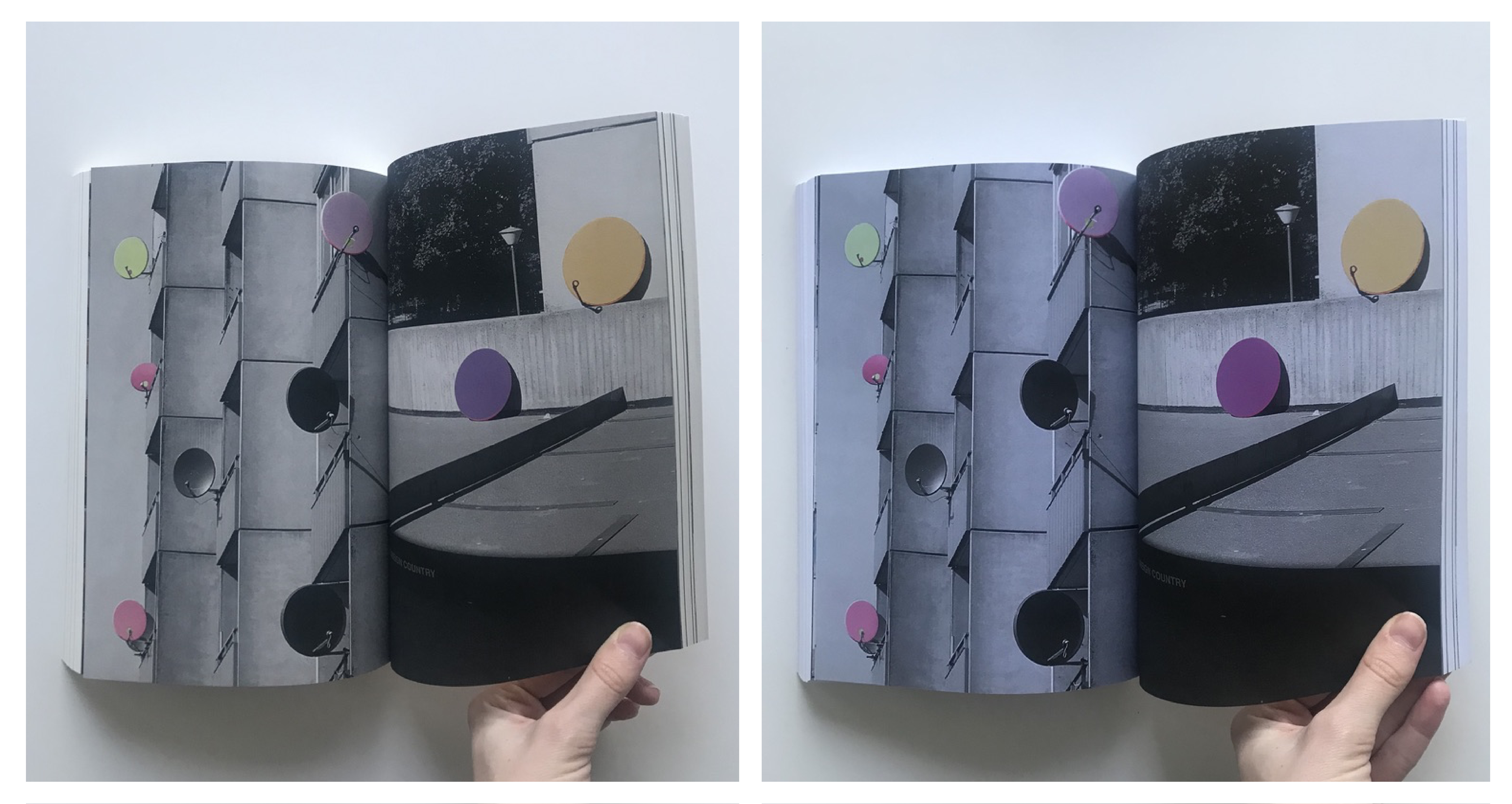 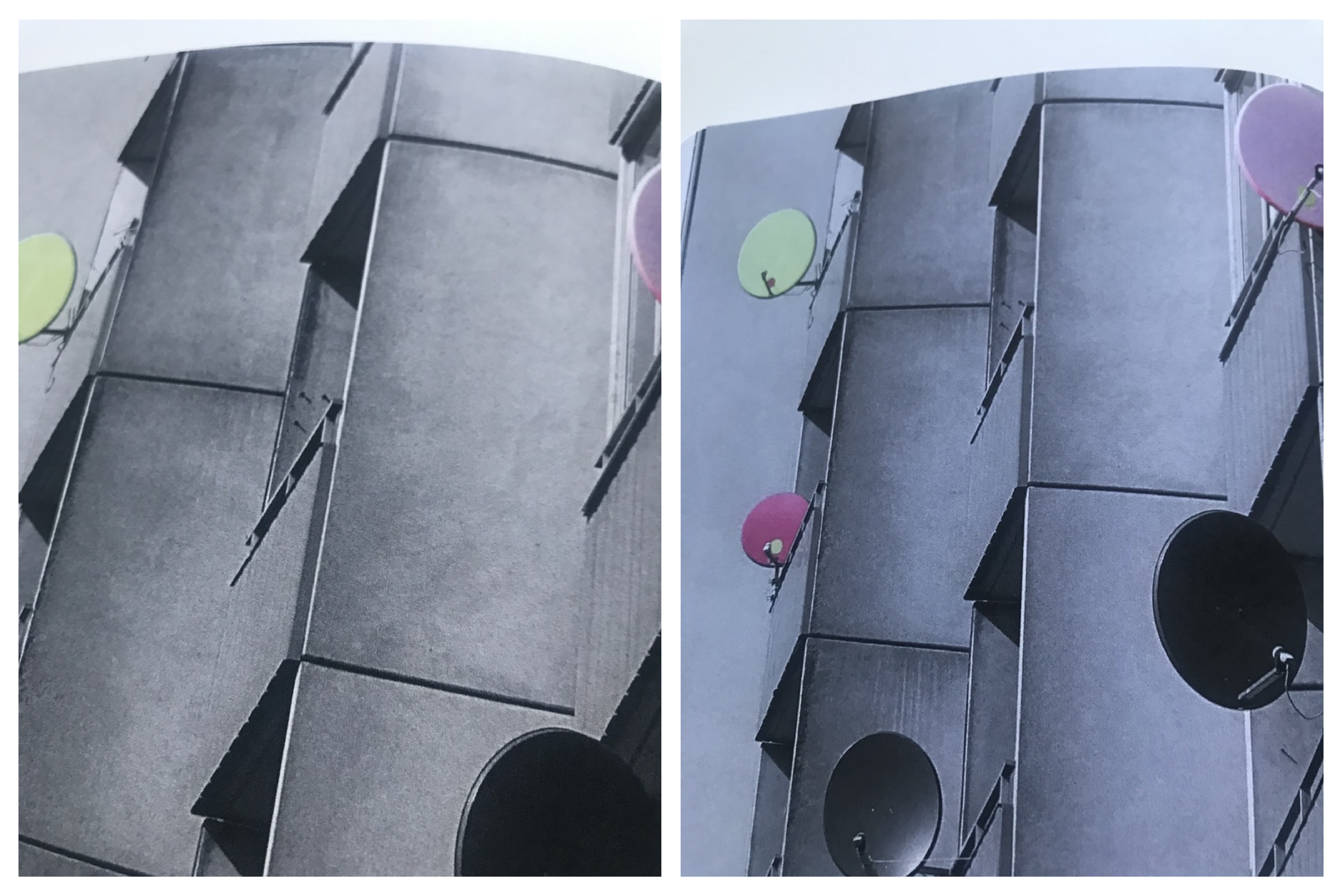 Publit prints info such as a barcode and QR code on the final page. Lulu’s final pages are empty. 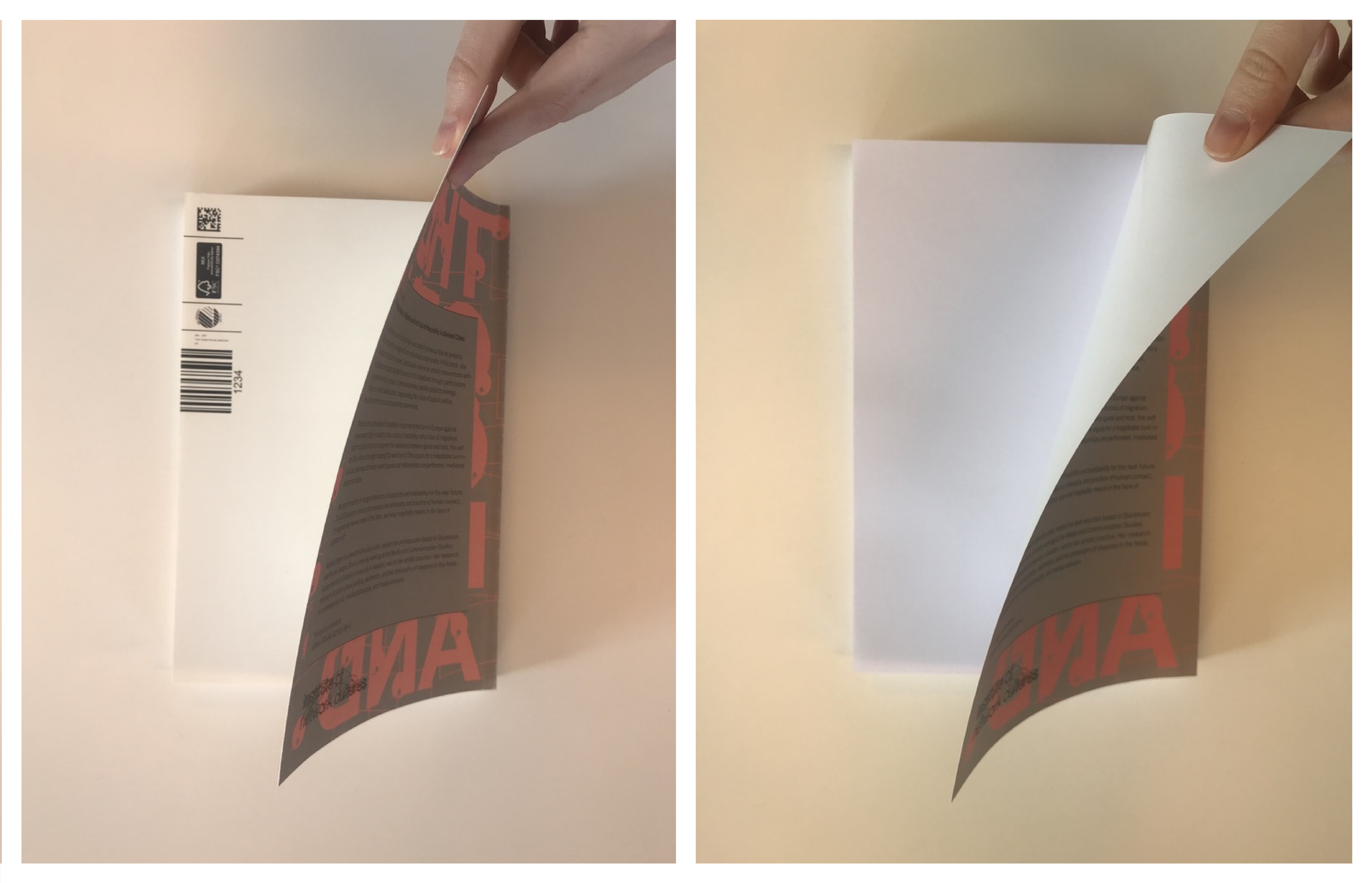 So the winner is … Publit!

For the most beautiful print, order via Publit. Depending on where you’re located, a Lulu print might be preferred due to shipping costs. (Or hack the system and get a Swedish friend to sent it to you by mail!)

As everyone who has ever got something printed-on-demand knows: there are a few general rules to have a better chance at getting a proper result.

2. Triple check your files on color profiles (Lulu confusingly uses RGB instead of CMYK. A first print ended up with black and white images in a pink tone, probably as a result of not using the right colour profiles in the files).

3. This also counts for bleeds and margins. If you print with Lulu you can check this in the preview. I kept on getting errors when uploading my files with the correct bleeds, this was solved by starting a new ‘project’.

All in all, nothing is better than reading a book in print, feeling the paper and getting a close look at the images.

Satellite Lifelines: Media, Art, Migration and the Crisis of Hospitality in Divided Cities by Isabel Löfgren is available for ordering:

Making Public teamed up with Lídia Pereira of Pervasive Labour Union zine after the Urgent Publishing conference to make a special issue that would move far beyond the known realms of ‘conference proceedings’. What happens if you shift focus from the official reports and try to include the ‘debris’ left after an event, in the [...]