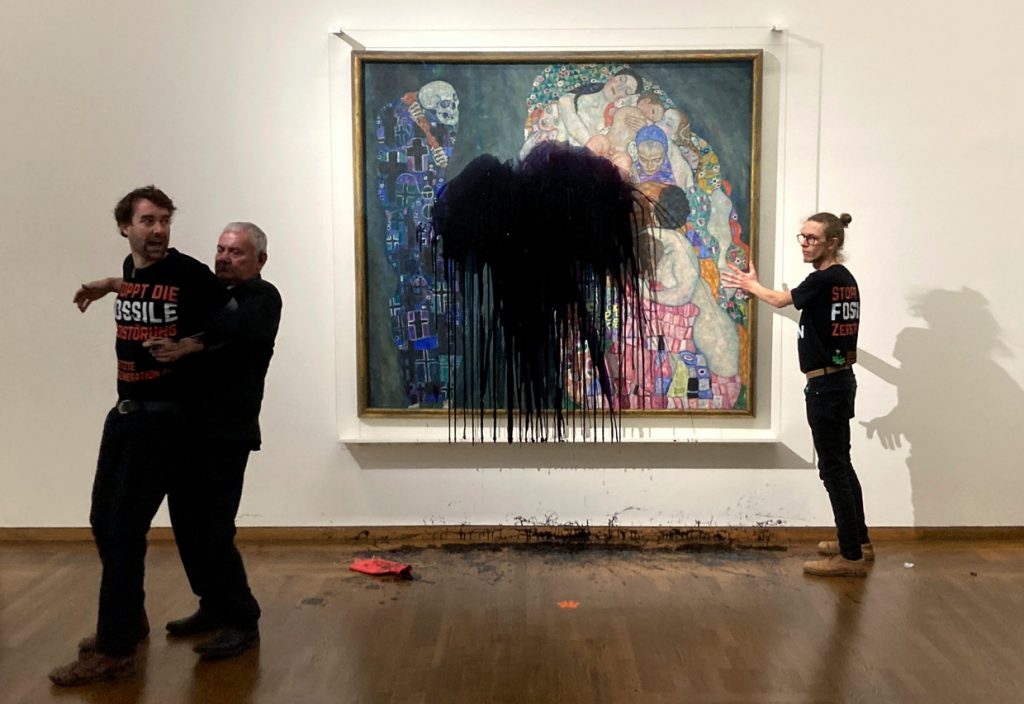 The actions are still keeping museum directors busy, though. In a statement published by ICOM on the 9th of November, 92 of them – including four from Dutch museums – called on climate activists to stop ‘attacking’ art. An expected response, but also one that shows a lack of understanding of the greatest danger to art and the directors’ own role in it.

After all, the ‘Death and Life’ itself remained unscathed, as did the other masterpieces targeted by climate action. Meanwhile, victims do fall elsewhere: ancient rock drawings are damaged beyond repair, the cultural heritage on Bonaire is threatened by flooding, and centuries-old churches in Groningen crack under the continuing earthquakes. Do they have less historical and cultural value than ‘Death and Life’, or just less monetary value?

Many museums, meanwhile, are already arming themselves against the climate crisis. For instance, the Getty Museum’s fireproof building in Los Angeles proved useful when a forest fire approached it at close range. Water damage in art depots from washing water can also be disastrous. It’s no coincidence that the new depot building of the Boijmans van Beuningen (Rotterdam) was built at 6 metres above sea level. The new building of The National Museum in Oslo – home to Munch’s The Scream and signatory of the statement – was also built well above flood level.

Other signatories have already experienced damage from extreme weather. The Groninger Museum suffered water damage from heavy rain, as did the Dallas Museum of Art. New York museums have suffered from superstorms before, such as Hurricane Sandy in 2012. The Uffizi in Florence had to close during a heatwave because there was too little water in the Arno River to keep the air conditioning running. And the Louvre already moved 250,000 artworks to a safer haven further away from the Seine.

So why do directors send such a statement to climate activists but not to the most significant cause of climate disruption? The fossil industry is the biggest cause of the climate crisis. The industry has systematically misled the public through greenwashing marketing for decades, delaying the sustainability transition and violating human rights to protect its business model.

It is precisely this fossil industry that forms the blind spot of the art sector. Because while many a museum is making its premises more sustainable or organising climate exhibitions, fossil enterprises such as Shell, NAM, TAQA, Gasunie, Gasterra, KLM, Schiphol and fossil-fuelled bank, ING, are allowed to use the Dutch museums through sponsorship contracts and partnerships to greenwash their image and mislead the public.

Even when a museum says goodbye to fossil sponsors after pressure from climate groups like Fossil Free Culture, Extinction Rebellion, and Advertising Fossil Free – the Mauritshuis, Van Gogh Museum, Rijksmuseum Boerhaave and NEMO did so with Shell – it happens in dead silence. Never has a museum director had the courage to say it was morally the right choice.

Yet there is hope. Times are changing within the museum world. Recently, at the session ‘(moral) choices in partnerships’ at the Museum Congress, a sharp discussion unfolded about the sponsorship of the Drents Museum by NAM. One participant remarked, cautiously: ‘This might be one of those tipping points.’

Could it be? Will museums soon be on the side of climate activists? Will directors then send a public statement to their fossil sponsors to end cooperation? That would be sensible. A ban on fossil advertising and sponsorship is coming anyway, just like the ban on tobacco sponsorship. But museums can – as climate disasters and deaths pile up – already move away from the fossil industry. For the sake of the climate and for art. For human and other lives.

In December 2021, we published the Post-Precarity Zine, a toolbox for beginning artists. Due to high demand, we have decided to print a second edition. Free copies are available once again here. Times have changed. The art world and the creative economy are no longer the ones we used to know. The digital economy, the [...]

Artists and other cultural workers have tried to create stable, long-term collective income systems for themselves forever. In 2004, an American tech entrepreneur launched one of the most ambitious redistribution schemes up to date, the Artist Pension Trust (APT). The idea was to give artists not just long-term income, but even a pension—a luxury highly uncommon among [...]