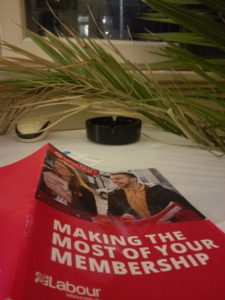 I have joined the Labour party. I have joined the labour party for a few reasons – one of them is that I am one of 900,000 uk nationals living abroad who face uncertainty in their international status when leaving the E.U. The labour international consistency has 2,400 members and half of them are based in Europe and apart from the ‘Brexpat’ twitter account there is very little organized platform for concerned Brits to discuss their EU status once article 50 is triggered. Hopefully Labour international can be a forum for such issues once the article 50 negotiotiation starts to take place. Secondly, not so much of a reason but more a response to harmful nit-picking between socialists and left wing liberals who apparently support labour but believe Corbyn is unelectable. I am also not a Corbyn champion, he is often slow to react on key issues and completely failed to keep us in Europe however I can not wait around till the next general election in 2020 to wait to restart new labour. Under the dramatic shifts towards isolastionist national trade policies in the west even the most dedicated opposer of Corybn cannot expect to re-instate globalised trade agreements to how they were before Brexit/Trump. And lastly, perhaps this is why I am posting this comment here, is that there should be a considerable reflection on what labour is in the information economy and how a political body can represent an ever emerging working class. A party that formed to represent workers during the industrial revolution seriously needs to revise how they represent workers in the information economy. Work is dramatically changing, not just the rising precarious labour markets of temporary or on demand service jobs, but even with creation of more jobs, productivity is as bad as it was in the 1990s.  The Bank of Englad has called this ‘The productivity Puzzle’  even though employment has returned to pre-crisis levels productivity is ‘expeptionally weak’ so even if more people are working wages will not rise because GDP remains flat. There are many interesting possibilities for this (distraction, motivation, low investments) but I myself like to think that the post-work narratives highlighted from the likes of Graeber, Picketty and Mason began to decouple the harmonious ‘worker as capital producer’ relation. Work has perhaps has lost it’s immediacy, a direct outcome from tasks that can excel efficiency. In addition to the conclusions drawn by Picketty that only capital produces more capital and much labour time is now spent administrating what Graeber would define as ‘bullshit jobs’, finding meaningful labour that creates enough work to get rich seems to have been quickly noted and quickly forgotten. I understand that no-one wants to be lectured by either a privileged academic or a specialist team coach about why their job is bullshit and why they will never become rich through their labour. But could these questions be asked by a political body representing workers in the united kingdom? Labours challenge to re-connect with the working classes should be based on a complete evaluation of labour representation in 21st century, speaking to broad, diverse and perpetually precarious workers who freelance, co-work and complete micro-tasks to not even earn a minimum wage. Re-situating how labour is identified and articulated in networked infrastructures such as online labour markets, platform co-ops and even artificial intelligence and automated systems seems key to understanding how politics can engage with the the thousands of people becoming displaced by global tech infrastructures. While doing this, I believe it’s of equal importance to give considerable investigation to alternative financial models in the crypto-space and monitor experiments in electronic governance through blockchain and other networked systems. This is because underneath the libertarian crusade to dismantle institutional power there are some financial experiments at the very least de-constuct the tools to demonstrate how power, capital and value is created, distribruted and enforced through networked telecommunication. I am joining the labour party to re articulate how labour, value and capital are produced in a networked, platform based economy and put forward how developments in the fields of cypto-grapghy could offer new narratives for how labour and value are created and distributed in a socialist democracy.