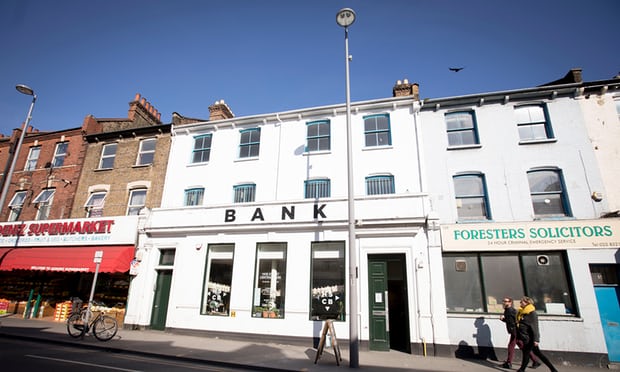 The Hoe Street Central Bank has taken over the former Co-op bank in Walthamstow. Photograph: Alicia Canter for the Guardian

During the past fortnight an incredible project has been taking place in Walthamstow in North London, Hoe Street Central Bank is a community banking project that combines direct action, activism and members of the local community to address the debt crisis. The project, initiated by artists Dan Edelstyn and Hilary Powell seeks to eradicate £100,000,000 worth of insolvent debt caused by predatory pay-day loans and fund raise for x4 local community projects. During the two weeks a small team of local community members turned a former bank into an ad-hoc money creation center to tackle the effects of debt in society. 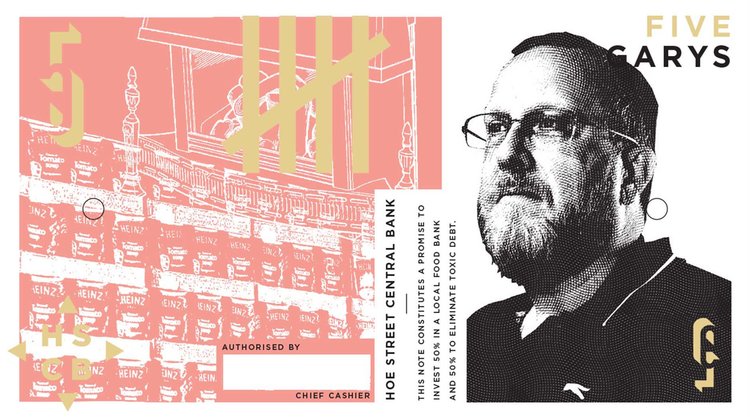 x5 “Garys” one of the divisions of bank note at HSCB

x4 different bank notes were designed symbolizing different local causes (I purchased x5 Garys) that were sold in exchange for Pounds Sterling. Each note was meticulously screen printed, signed and stamped before being sold to members of the public. Each note serves as an artwork and demonstrates the potential for art and alternative currencies to organise collective acts of financial activism. The total amount of artwork notes issued will then be evenly split between community charities and anonymously buying the pay-day loans. The poetics of anonymously paying off a strangers debt is an astonishing aspect of the project, the notion that someone, somewhere, will expectantly receive a letter from the loan shark company informing them that some of their debt has been anonymously cleared.

During their residence the artists bought the old bank back to life and hosted a series of talks, screenings and public events to discuss money and debt. Daily talks ranged from housing debt to alternative economics and featured a number of speakers including Brett Scott, Jeremy Gilbert, Ruth Catlow and myself to discuss ‘Manufacturing Decent’ that asked what art can do to manifest social change. Projects such as these fuse together different motives and methods to engineer an intricate collective strike on financial exploitation. Each note puts a face to a local cause and uses a local currency format as a way to crowdfund against debt oppression. In addition the project also provides short term local employment to individuals who work at the bank printing money.

While this first run of the bank job has come to an end, the artists will be putting out a film documenting their activity and you can still purchase some of these extraordinary bank notes via their website.