As a network that really isn’t a network yet, MyCreativity so far doesn’t work with an overarching structure. At present it consists of a group of individuals that all share some relation to the creative industries. But as participant Michael Lafond explained during the space-time interval before lunch – result of the huge lunch line – maybe a sustainable network will spin off from Winter Camp cooperation. Nevertheless, during these Winter Camp days the participants of MyCreativity largely work up to some sort of paper summarizing points of discussion, and final outcomes, for which a Wiki functions as a temporal resource for their precarious Winter Camp labour. 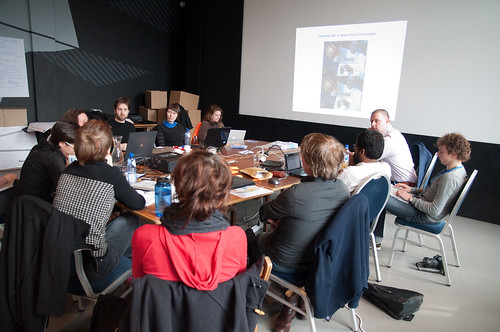 Similar to the first day, also on this second day of Winter Camp the MyCreativity session was structured around individual presentations, offering topics for discussion. The first presentation was by Birgit Bertram from the Secret Service arts collective. Unfortunately the call for a blogger (to document the discussion) came too late, and I missed the presentation, but I was still in time to make sense of the discussion that followed.

It revolved around a subject of general importance, a subject that especially in the creative industries regularly pops up. Money! And then mainly in relation to the notion of precarity, which in practice means something like being free, but mostly broke. 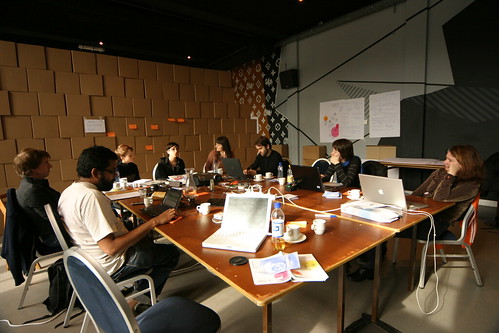 The financial issues of precarity that thrived during the discussion related to overcoming the irregularity of wages (or not getting any at all) as creative industry ‘employee’. And connected, the often non-existence of (temporary) labour contracts. An interesting group fact was that no member knew what each other earned, but each of them was very interested in knowing. This interest not only came from a personal curiosity, but also from a collective need to produce an ‘earnings’ map out of it. Thus getting an understanding of the spread of wages by making it transparent. Two people ‘revealed’ their monthly earnings but, for a still obscure reason, this idea blew over. In its place the subject of standardized contracts (E.g. http://ownterms.pbworks.com/w/page/6985495/FrontPage) was discussed as a possible solution for the financial irregularities. But, as most projects in this case, the secret service collective occurs within an environment of acquaintances, where asking for a legal contract often is skipped. Instead, within this trustworthy environment, the verbal contract dominates, which isn’t a rock-solid basis for a regular income.

The second presentation by artist Daniela Swarovsky, dealt with the issue of (pre)gentrification and the arts. Daniela showed a flood of projects undertaken in areas of gentrification surrounding Rotterdam. Again a key issue in these projects revolved around money. There are almost zero initiatives for gentrification coming from the community itself, mostly because as Daniela explains, ‘Everybody wants to make their money’. In short, everybody focuses on their own income but doesn’t care about the neighborhood in which they live. Another major issue seems to be the sustainability of these projects. As these community art projects seemingly are short-fixed, fitting in the strategy of ‘open source Urbanism’ that fittingly describes this short-term perspective of government policy. Question is if government and housing corporations even have an interest in the gentrification of old neighborhoods at all. Leaving it temporarily open as a haven of experiment for the creative community, or rather just upgrade it a.s.a.p, bumping out the existing community (local stores, restaurants, etc.), and replacing it with middle to upperclass living spaces.

Personally the most rewarding, and certainly the most fun, was the final discussion. Highlighting the key issues through the individual projection of desirable futures. This method for having conversations called ‘The future archive’, revolved around projecting yourself in a desirable future, while actively remembering the present. The future perspectives primarily focused on issues of finance/precarity, and collaborations. Some interesting ‘remembrances’ came up, which set out what for us, actually is the present;

So, to sum up, following these last remarks in a loose interpretation, money, the precarity issue, in terms of irregular wages, or not receiving any, actually proofed to be primarily a male issue. Women on the other hand, exploited the practice of networking, collaborating with equals, sharing CVs, and actually survived. This evolution seems to evolve naturally, so where does it leave the practice of the – not yet officially – set up MyCreativity network?