Blender is the leading open-source 3D graphics application that can be used for free, and by anyone  to create “Hollywood-style” art and video animations. While there are over 50,000 people participating in the online community, the “active” development team is composed of about 50-60 people.  At Winter Camp nine of the member came together to discuss improvements for the software. I had a chance to join Blender on Day 1 while they were getting warmed up.

The group focused very granularly on topics such as the MVC model for Blender, and how they should handle default keymapping in the case of users that have international keyboards. And while these discussions seem to be relevant for future releases of Blender, even the group admitted to me that the topics covered at this workshop are of much more interest to the developers and not for the end-user.

I had a chance on Day 3 to follow up with Blender members Campbell Barton and Brecht Van Lommel regarding Blender and their thoughts on Winter Camp. When I asked them about Blender’s competition they responded very slowly as if it wasn’t something that they’d thought much about. “We’re not really competing with anyone”, said Lommel. The guys agreed that Blender’s success had grown large enough to keep the project moving along – as well as keeping them employed – so they don’t have to worry whether “Hollywood” is paying attention or not. 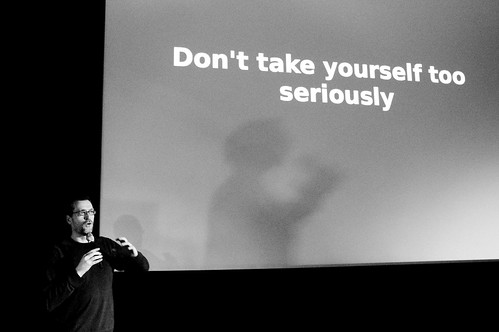 “An amateur could see something like Lord of The Rings and say, ‘hey, I need to go out and get the same expensive software if I want to be serious about 3D design’, but the truth is they probably won’t use all of the complex functions”, they exaplained. Therefore, Blender’s target audience is the low-to-mid level 3D designer. Also, it is especially useful for high schools and colleges that want to offer 3D modeling courses, without the pricey overhead to afford a high-end software package.

After sitting in on meetings with five of the networks here at Winter Camp the difference between the technical groups like Blender and the more theoretical groups was striking. Blender, for instance, has a concrete goal that is almost tangible and therefore within the group there has been little to no discussion about the group’s identity or “hierarchy”. Barton talked about his experience at the plenary session, “Maybe I don’t understand the abstract talks we’re having at these meetings or if it doesn’t so much apply to Blender. We’ve been working well together for a few years now, and I’m not sure how useful it is for us to think…ok well each of us are nodes, and so-and-so here is our network diagram.”  In the case of Blender, an abstract discussion on Blender’s own network structure may be more beneficial to the other networks here at Winter Camp hoping to learn about how a successful network operates. As one of my colleagues here commented, “It seems like the groups that are confused about their goals and identity are having the most trouble collaborating this week, while groups like Blender and GOTO10 are too busy to worry about it.”