“Wikipedia art doesnt exist anymore”. These heavy words elapsed provocatively out of Scott Killdall‘s mouth somewhere during the first part of his speech. Only later on in his talk, were we to learn why.

Scott Killdall stood behind the speech table. A short man, peering into the audience determined to get his message across about the life, death and debatable resurrection of the phenomenon called Wikipedia Art. 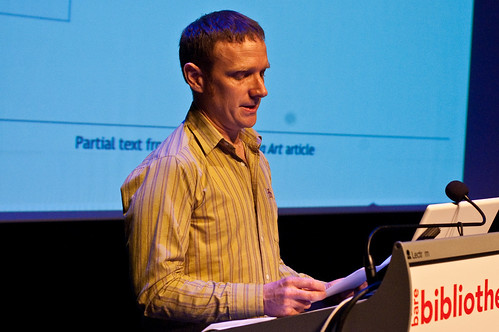 Wikipedia Art was a performative act originally intended to be art composed on Wikipedia. Though confined by the enforced standards of quality and verifiability of Wikipedia, the artwork could potentially be edited by anyone as long as changes were published on, and cited from, ‘credible’ sources.

To catalyze the launch of Wikipedia Art, Killdall and Stern had urged others to write about the project as it came into existence to facillitate sources. These sources, being interviews, blogs, or articles in ‘trustworthy’ media institutions, were meant to give birth to and then slowly transform the work of Art.

And so it happened. Simply through writing and talking about it, the debate around Wikipedia Art ignited. The tremendously heated discussion led to the expulsion of Wikipedia Art from the Wikipedia demain only 15 hours after it’s birth. This seemingly premature death is paradoxical in retrospect according to Kildall when he responds to a comment from the audience.

As Wikipedia Art was to be interpreted as a critique of the shortcomming of Wikipedia, it was essentially an intervention. It was in itself destructed by the exact ‘wikiality’ it was critiquing. As Kildall explains “The majority of Wikipedia readers rarely think of the internal strucutres and rules behind Wikipedia.” Wikipedia Art surely unveiled these structures, as we see in the skelletons that are left. In the eyes of the wiki community, Wikipedia Art was seen as commercial vandalism, and was banned from the site.

Now, you might ask. What exactly ‘is’ this piece of art. The answer is abstract. For one, to understand it, you have to step away from the traditional concept of classical art that is based around an image. For Wikipedia Art is about the construct of words itself. Kildall teaches us throughout his talk that it’s form is in words, as that is what Wikipedia does best. “Through citations and debate it existed.” Subsequently, because of this debate which turned against the artwork itself, it was also destroyed.

Wikipedia Art lives on in the minds of peoples far from the Wikipedia domain. For us who have missed its birth, bloom and death, we have to made do with the words of Patrick Lichty; “Those fifteen hours were magic”. 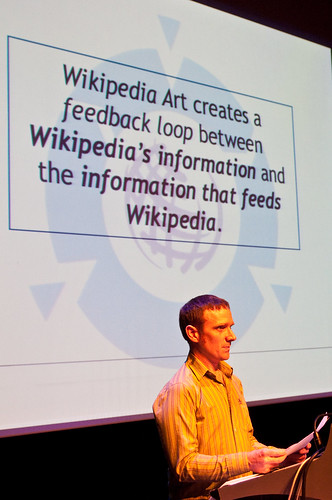