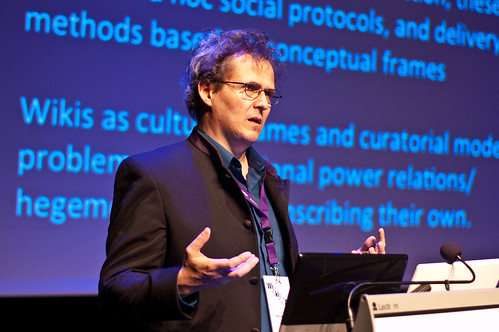 Presentation by Patrick Lichty for the Critical Point of View (CPoV) conferece in Amsterdam, 26.03.2010

Patrick Lichty, assistant professor of Media Theory at the Columbia College in Chicago and independent curator, walks in with a Lila toy gun, the American way of defence, on the podium and states: “This presentation might get me killed”. This sentence will be better understood after his ironical comment, that there seems to be not much consensus in consensual media.

He analyses Wikipedia and other community-driven online media as cultural frames and curatorial models that problematize traditional power relations.

From a radical perspective, the wiki template can be considered a site for anarchical organization. However, they are anarchic only when used in their most basic forms. These communities create their own power relations. This means, after the formation of the community, participants start to establish themselves a set of rules/social contracts, which are implicit or explicit, and are then enforced. These rules are created to frame for instance the user generated content, the community’s mission and several internal governances, all of which are specific to this created community. Each user-generated community has its own agendas of power.

He questions whether we can learn something from the relocation of power structures, from the institutional to the communal. Also, is the political structure of Wikipedia superior to the traditional one? Furthermore, are Wikis radical? Do their created social structures and communal cultural production have any effect on the larger society? Is there a potential for art in such a community structure? How does art and curation change when subjected to consensus?

In order to answer some of this questions, he presents some user-generated communities as sources of cultural influence:

The first one is the Encyclopedia Dramatica, which is a kind of internet counter-culture site. It consists of trolling, low culture (such as lolcats), pop songs, etc. In terms of cultural function, ED is the direct opposite of Wikipedia in its anarchical nature. The similarities of the two wikis seem not to be their form though, but their context.

4chan.org is not a wiki, but one can make an image available for comments. It is frequently the main influence that originates many of the famous internet themes, like the lol cats phenomenon. Also, in opposition to the wiki sites, which have stated missions, the ‘Chans’ are much more generalized and have lose categories. Discourse arises in a more ad hoc way. They are not completely anarchic, but considering the social structures of Wikipedia, they are much more flexible.

However, do communities such as Wikipedia Art or YTMND suggest viable models for community based curating?

Wikipedia Art was a further example. He explains that the entry was the art work, and any further editing was considered as continuation of the process. The interesting part was the community interactions surrounding the work. The entrance changed from a strategic art work into a tactical one, as the discussion turned into a sort of battle field and started bridging molecular communities (Wikiart, blogs, Wikipedia, etc.) and their cultures into a larger discourse. During its existence many of the community’s rules, unknown to the outsider, revealed themselves into the discussion – eg. Trolls or snowball rules.

Another example was the website Art in the Age of DataFlow and its wiki book chapter. Here he points out the wiki-based article on non linear narrative, that even though it was written to be modified, it has been modified only very little. The question that arises is whether authorship is still seen as something sacred, or if the community needs to achieve some critical mass to get conversation going on. Or: “Did no one simply give a ****ing damn?”

In short, he examined the structures of these community based media production sites plus Wikipedia in order to verify the differences that emerge due to their local discourses and social protocols. How do they relate to the construction of society?He concludes that community-based media creation sites like Wikis create interesting potentials for curation and creation, however problematic. Will the future of curation be wiki based, or will it have the format of 4Chan, YTMND…?

Furthermore, he points out that the emergence of communal media creates hegemonic structures which are not better than the institutions before them. He is neither for nor against either one, but he calls for intentionality. What is necessary is that as cultural production heads towards social media community based models, cultural producers need to maintain a cpov in order to maintain a notion on how culture is being shaped by online platforms and how a tecnocultural society is being build, as well as its culture in general. 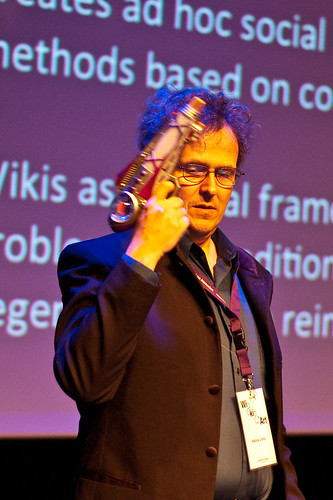