First of all I want to apologize because I’m not sure that I fully understood Hans Varghese Mathews core message during the CPOV conference. So I hope that with a little more research, I will be able to enlighten Varghese Mathews main conception. 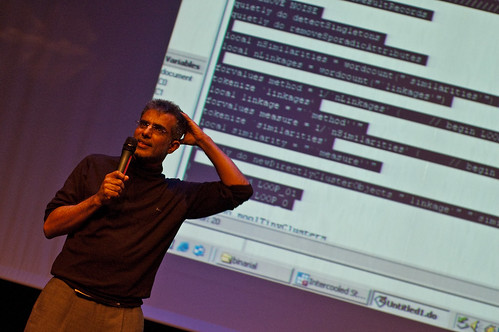 There are a lot of discussions going on how to obtain crucial information that concerns Wikipedia’s ever growing body of knowledge. One Wikipedia page is even considered to be a textual dynamic research object because of continuous augmentation and revision. As Varghese Mathews puts it: The sheer volume of the website necessitates – and its digital form abets – the automated essay of its contents for evidence upon which to found such inference and interpretation as is proper to the eliciting of such history. And so he has developed an algorithm that will provide a way to collect data that goes beyond human interpretation. Through realizing the page editing history or as he calls it the narrative, Varghese Mathews wants to detect pack editing behavior. He elaborated the tool intentions by introducing us to the algorithm instead of giving a PowerPoint presentation. To do so he used the retrieved data, and explained that the tool clusters the contributors to a Wikipedia page. The Evolution is an example of such a Wikipedia page. The various editors of the frequently edited Evolution Wikipedia page can provide inside when particular interests are clustered. With the help of his tool one could distinguish different editors and cluster them together by some particular interest. The tool functions with minimal human intervention. And despite the fact the some supervening of human judgement is needed, Varghese Mathews – or anyone else of that matter – could use the tool for interesting insides. This tool is aimed at producing information that will allow anyone to analyze editing behavior on Wikipedia.

It is too bad that we couldn’t see more of the collected data or results. Okay, I admit he did show some results. But the main issues there is that his story wasn’t structured enough. The only message that I could distill was that he had developed a tool for massive analytical use. Non the less I do find his tool exciting.

More information about him: