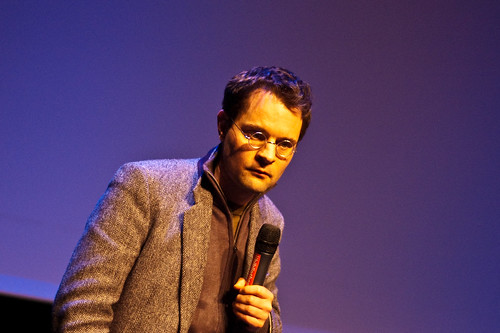 The German WikiWars and the Limits of Objectivism

Presentation by Florian Cramer for the Critical Point of View (CPoV) conferece in Amsterdam, 27.03.2010

Cramer started his presentation by pointing out to some fictions about collaborative media. He believes it is mostly a utopia, what leads to a big history of disappointments.

On the positive side, Wikipedia, with all its problems, is nevertheless the only large-scale working community of collaborative authorship. The implications of that are not all positive though: If one considers the hypertext/hyperfiction utopia by Nelson, Bolter and Landow in the 1990s, their ideas, especially when applied to literature, have gone almost nowhere. The notion of collective intelligence by Pierre Levy has also failed in most cases, if one considers the huge amount of single authors and single articles. Wikipedia, in this case, is what comes closer to his ideal of collaborative writing. The p2p, another utopia, ended up being used for consumption instead of being a media for cultural production. Finally, the creative commons idea, whose works are rarely re-used. He thinks that these hopes for collaborative media are ‘a bit old European’, and the one that persists the most is the hope for a CPoV instead of a NPoV. This means, that Wikipedia is founded precisely on the opposite of CPoV. This is a question of what inspired the creation of Wikipedia.

He continues his critique by showing the Wikipedia page on Jimmy Wales (‘largely edited by himself’) and emphasizing his influences, which involve Ayn Rand’s Objectivism – which is ‘hard core neo-liberalism’ and ‘capitalist philosophy’. This philosophical stream believes that there is an objective reality and that therefore it is possible to have a NPoV of things.

He believes that Wikipedia is the only successful appropriation of the notion of Open Source for works other than software. Free marked and the free flow of ideas were also incorporated (see 1998s the Cathedral and the Bazar). In other words, the NPoV is the translation of Ayn Rand’s school of thought and other libertarian influences into the project.

Wikipedia, as well as other FLOSS movements, are built on consensus. The main problem is that this consensus is built on fictions. In Wikipedia there are implicit social contracts based on objectiveness, what holds the community of editors in Wikipedia together. However, this fiction/myth of having an objective reality does not scale. Once the project grows and controversies arise, it leads to subsequent disappointments.

A further design problem in Wikipedia is that it tries to create its neutrality/consensus/objectivity by the way the article page is designed. It looks like one unitary source of information that does not reflect the actual editing history. 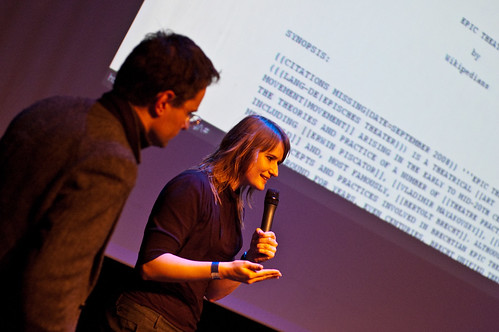 Cramer finalizes his presentation by introducing Annemieke van der Hoek, who developed a tool called Epicpedia. EpicPedia (based on the epic theater by Bertold Brecht) is a tool that translates Wikipedia pages into a theatrical kind of way.