The mission statement of the Wikimedia foundation says: “Imagine a world in which every single human being can freely share in the sum of all knowledge. That’s our commitment.” If we want to achieve this, Hendrik-Jan Grievink states, we have to take it literally: imagine a world in images. He holds a Master in Design from the Sandberg Institute, the postgraduate course of the Rietveld Academy in Amsterdam.

What follows is a brief overview of his previous work. For instance the posters he made for the MyCreativity and New Network Theory conferences. His approach is remixing the world around him. “Not very unique”, he confesses, but “remix is something of our time.” Illustrating this, is his successful project Fake For Real, a memory game which draws attention to fake/real counterparts. “As a designer, I try to make sense of the world through images”, he continues.

His recent, work in progress, project is called Wiki Loves Art. One part of it consists of a competition for the best illustrated Wikipedia articles. People are competing to take the best pictures of existing art. The photos, with aspects like depth of field and alternate point of views shed new light on pieces of art. Something that opens up museums to new audiences. By uploading these pictures to Flickr under the Creative Commons license, a database is slowly constructed. The result is a lot of free content, available for other artist, which enables remix. For instance, Bruegel’s painting of The Tower of Babel was documented many times, presenting the artwork in various ways, which was then picked up by some to be digitally edited. Something that wouldn’t happen with professional artists.

The other part is very much under construction. Actually, Grievink gave us some insight into this book that wasn’t even shown to those involved in the project. The book is going to be a sort of documentation of and reflection on the Wiki Loves Art project. It will be structured completely like an index from A to Z. It has to be kaleidoscopic, almost like browsing through Wikipedia: “a source, but also an experience to be there”. That’s something he wanted to remake in book form.

The book does three things: 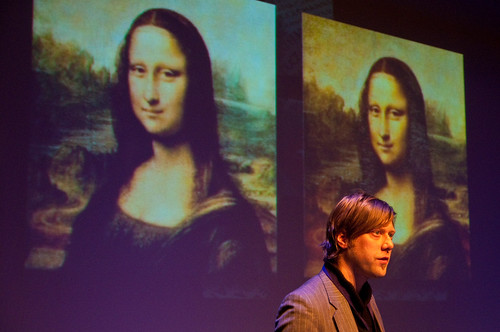 This is a relatively small project, “but we must not forget: images sometimes do change the world”, like the first photograph of planet earth. Thirty years after it was made, this photo was re-used by Al Gore in his documentary An Inconvenient Truth. The movie is overwhelming, partially due to the fact of the powerful imagery. In an open society, docs like this presentation by Al Gore should be available to anyone, Grievink argues. Not only the presentation, but also every image and everything in it: “A real challenge would be to think of Wikimedia Commons as a goal in itself.”

It is like the logo of Wikipedia: with puzzle pieces still missing. A tower of babel that will never be finished, but nevertheless is worth pursuing. “Well, Wiki might love art, but there is a long road before art loves Wiki.”