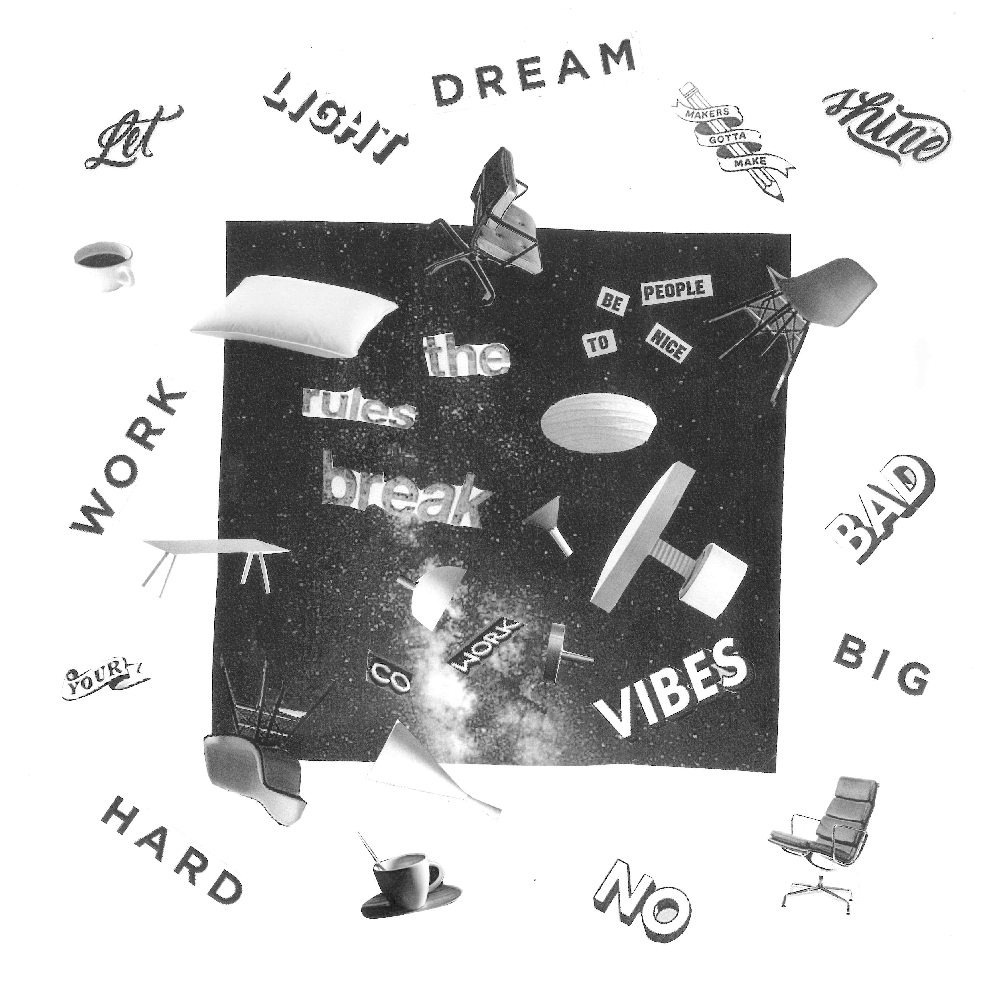 Collage by Benedetta Ettorre, an invasion of design motivation which reminds me of a Typographische Monatsblätter cover by Dan Friedman.

Recently, Michele Galluzzo and I were invited to run a five days workshop on Design Research and Criticism at CFP Bauer in Milan. We decided to employ the techniques and traditions of collage and décollage as a lens to understand –and ideally rethink– the way graphic designers look at their own practice. Our proposal was to consider the making of a (dé)collage as a ritual performed to "manifest" the work of the designer in order to potentially manipulate it. In this sense, our idea of (dé)collage resonates with what Mark Fisher described speaking of Savage Messiah, a book/zine by Laura Oldfield Ford:

She deploys collage in much the same way William Borroughs used it: as a weapon in time-war. The cut-up can dislocate established narratives, break habits, allow new associations to coalesce. 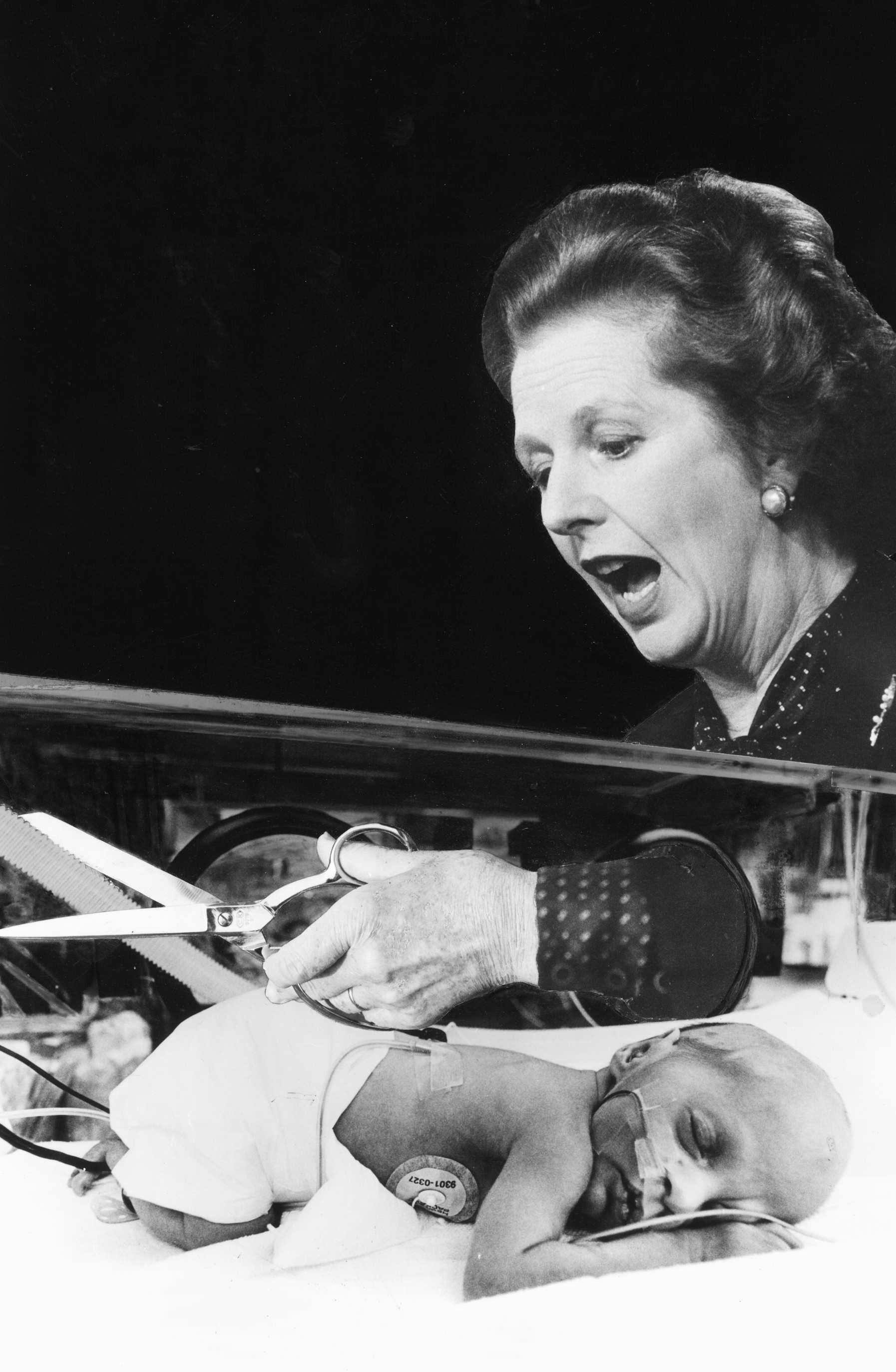 In this post, I focus on the second part of the workshop in which collage is used as a means to recombine professional aspirations beyond and outside the normalized regime of competitiveness and alleged meritocracy. As an introduction to the exercise, I showed an overview of the various possibilities and "attitudes" of collage, such as collage as a form of activism (from John Heartfield to Peter Kennard), as zeitgeist (from Richard Hamilton to Joe Hamilton), as allegory and inner world (from John Stezaker to Kensuke Koike), and finally as fiction and anticipation (from Henry Peach Robinson to Superstudio). 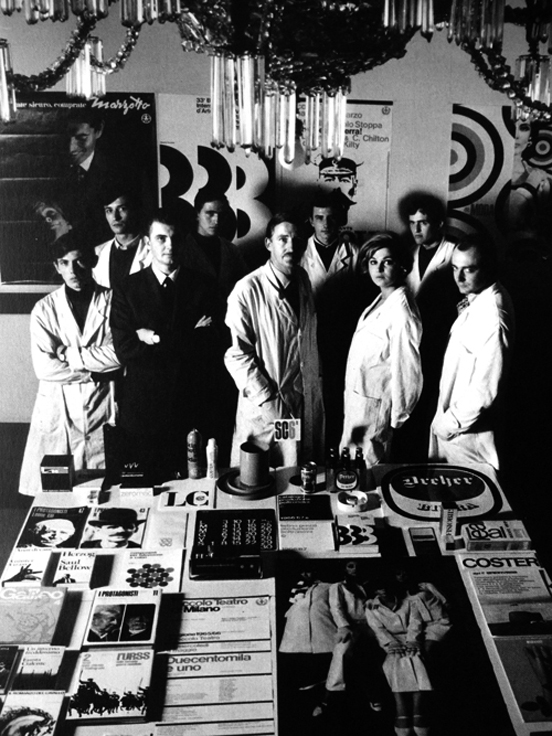 This part was followed by a brief examination of the active efforts of self-representation carried out by acclaimed graphic design bureaus (from Unimark’s lab coats to the naked bodies of Sagmeister & Walsh’s staff). In contrast with that, we looked at some comics and memes on the grinds of freelancing and a few statistics related to that. 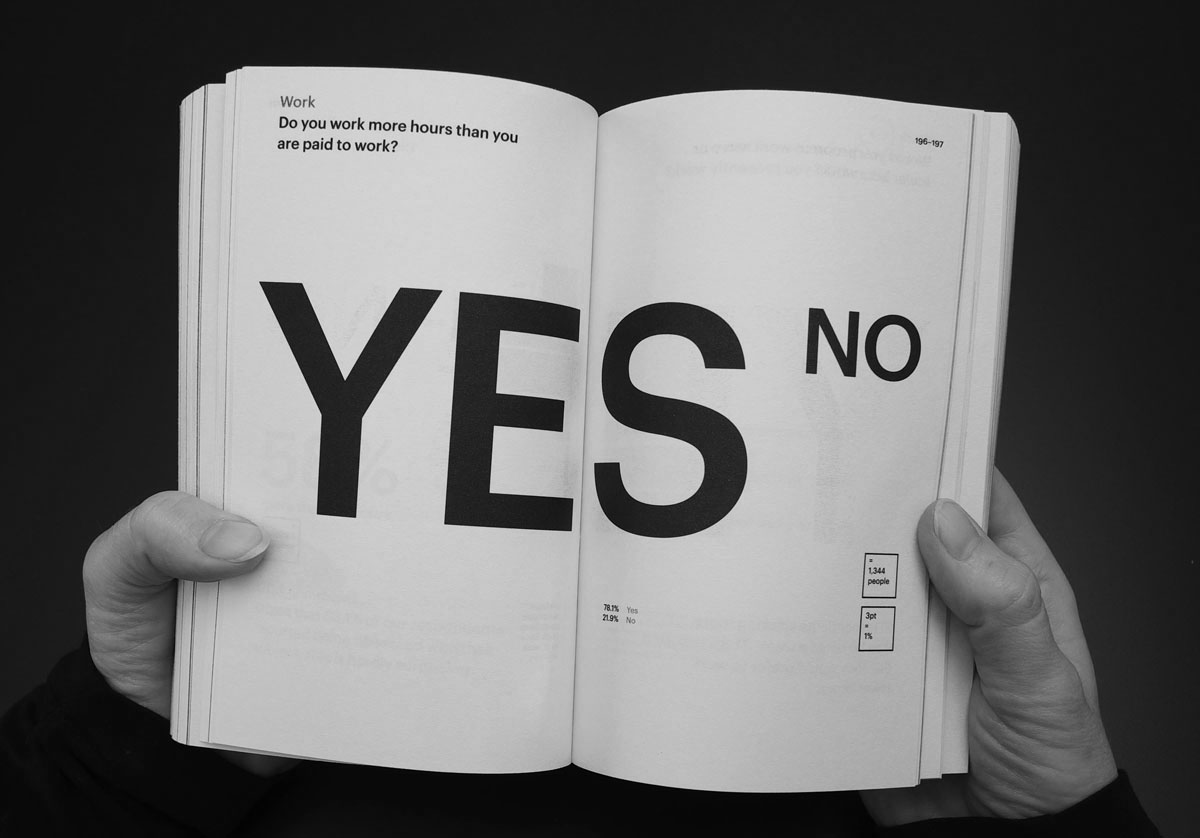 Finally, I asked the students to materialize a vision of their own future professional life through the making of a collage. Taking inspiration from the previous examples, the students were free to use any tone or style they would find appropriate, be that critical, ironic, objective, surreal, symbolic, sincere. The goal was to define a space in which the values and feelings related to the profession of a graphic designer could emerge. So I asked the following questions:

What does your job look like? Do you work alone or with other people? Where and when do you work? What kind of equipment do you use? Does it make you happy? Etc. 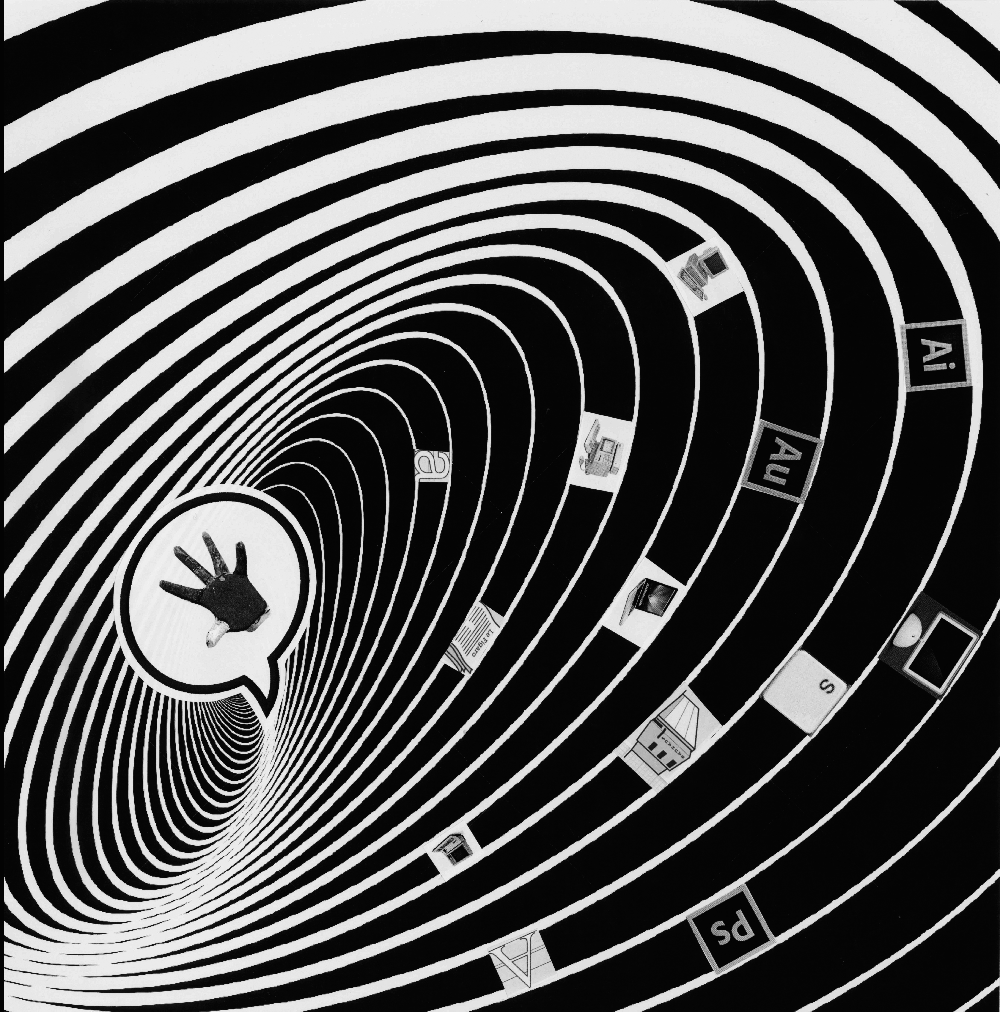 Interpreting the initial outcomes of the exercise is not an easy task but I can’t avoid to perceive a not-so-hidden anxiety for the future, a sense of instability both at a professional and psychological level. Take for instance Marta Fioni, who describes her collage as "circus acrobatics in the Machiavellian vacuum of a startup shark videogame." 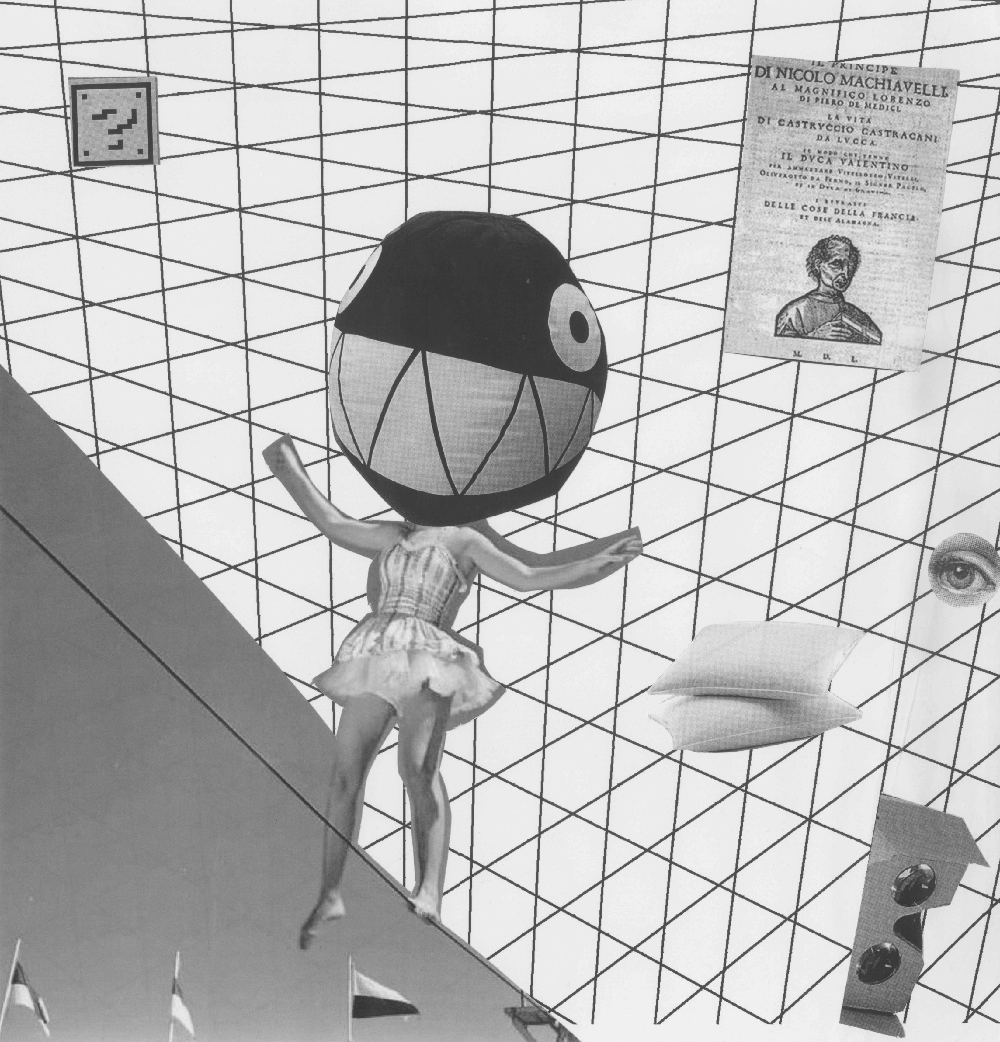 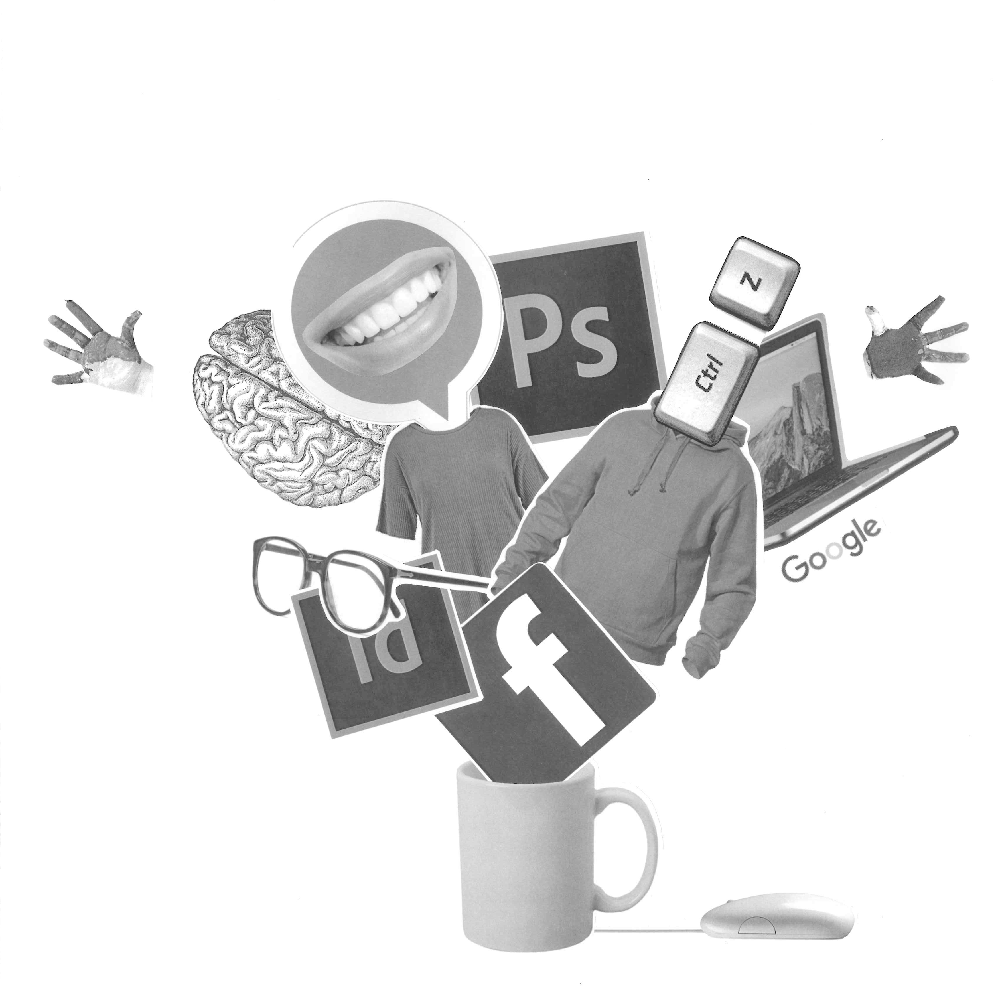 Furthermore, a fascination with digital tools clearly emerges. Nicola Nannavecchia, who mixed these two sentiments in his collage, wrote that "the new is already obsolete and the graphic designer must never stop". Finally, the consuetude of working from home or from other informal spaces like Starbucks is expressed in some collages, like the one by Laura Gullo. 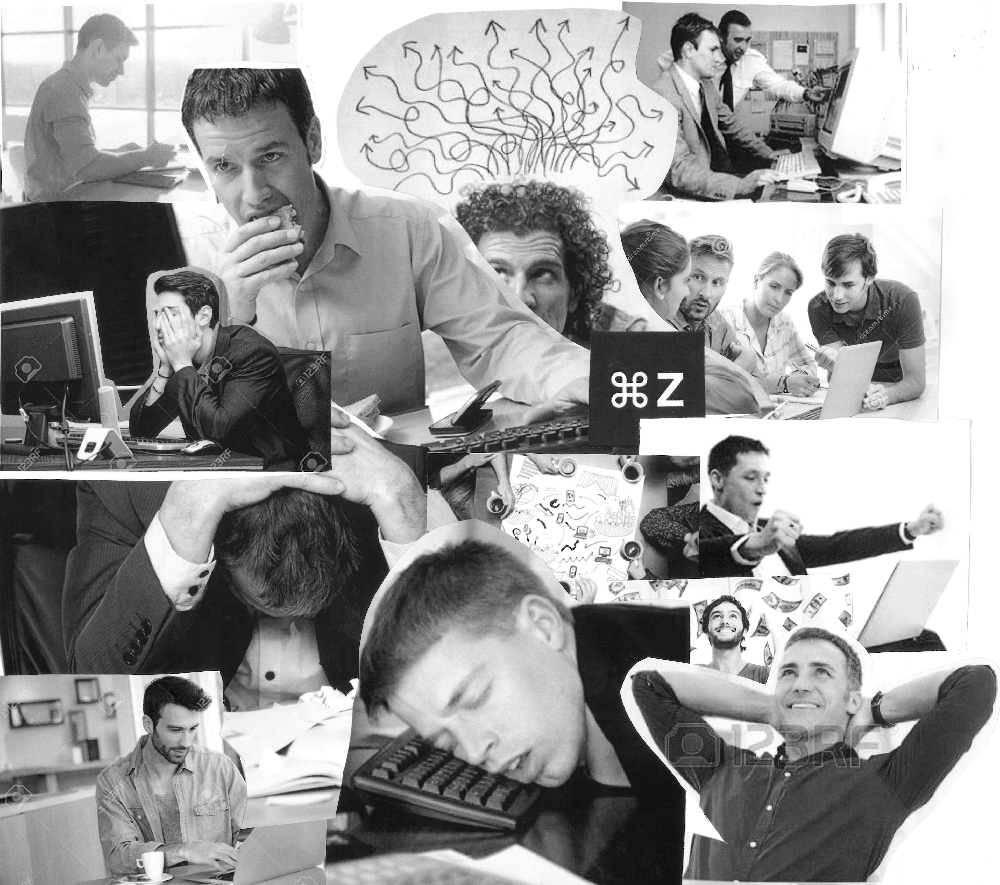 Collage by Tommaso Galli, the many faces of design labor

A collective discussion on the choices made in the collages followed. Then, we had a brief look at the debate and the initiatives aimed at critically addressing the current labor conditions within the creative industries (like the book Training for Exploitation?). 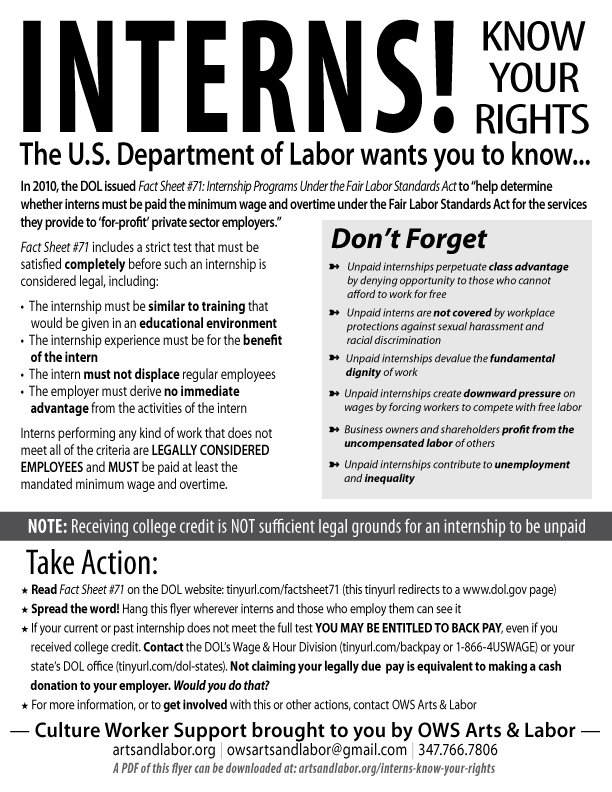 Flyer released by Arts and Labor in 2012

At a certain point, I introduced Fiverr, an online marketplace where the design of a logo or an illustration sometimes costs 5$. I was surprised to find out that not only a student knew the platform but she already used it in order to commission a photoshop gig. 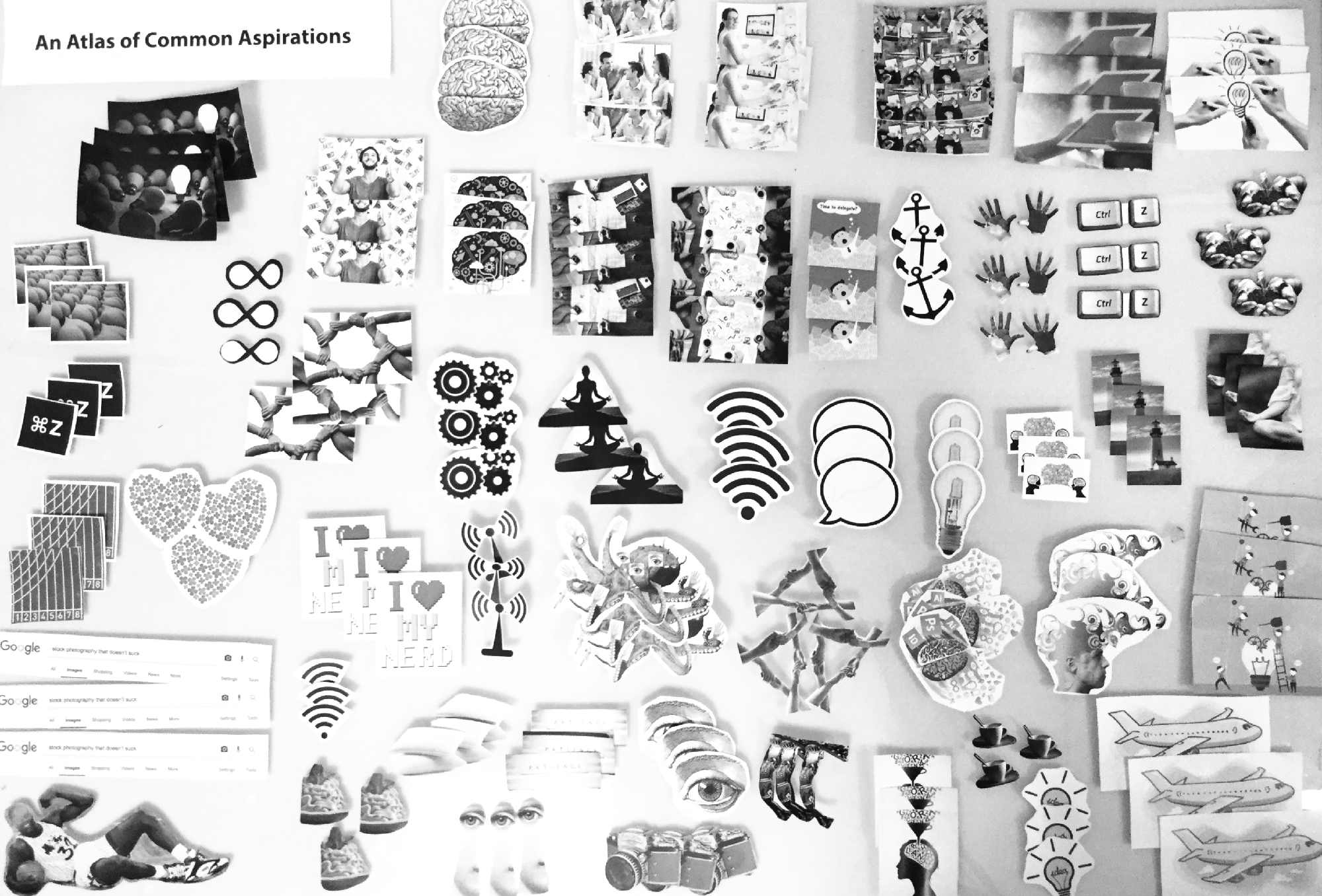 The Atlas of Common Aspirations

The last part of the exercise consisted in building an "Atlas of Common Aspirations", by amassing a series of symbolic elements representing what would be collectively valuable for the category of designers. Such "commons" were therefore meant to enrich personal collages with some cooperatively harvested elements. There were several students that added the CTRL-Z shortcut to the atlas. When asked about their choice, they responded that they often feel the need to "undo" some of their professional and life decisions. 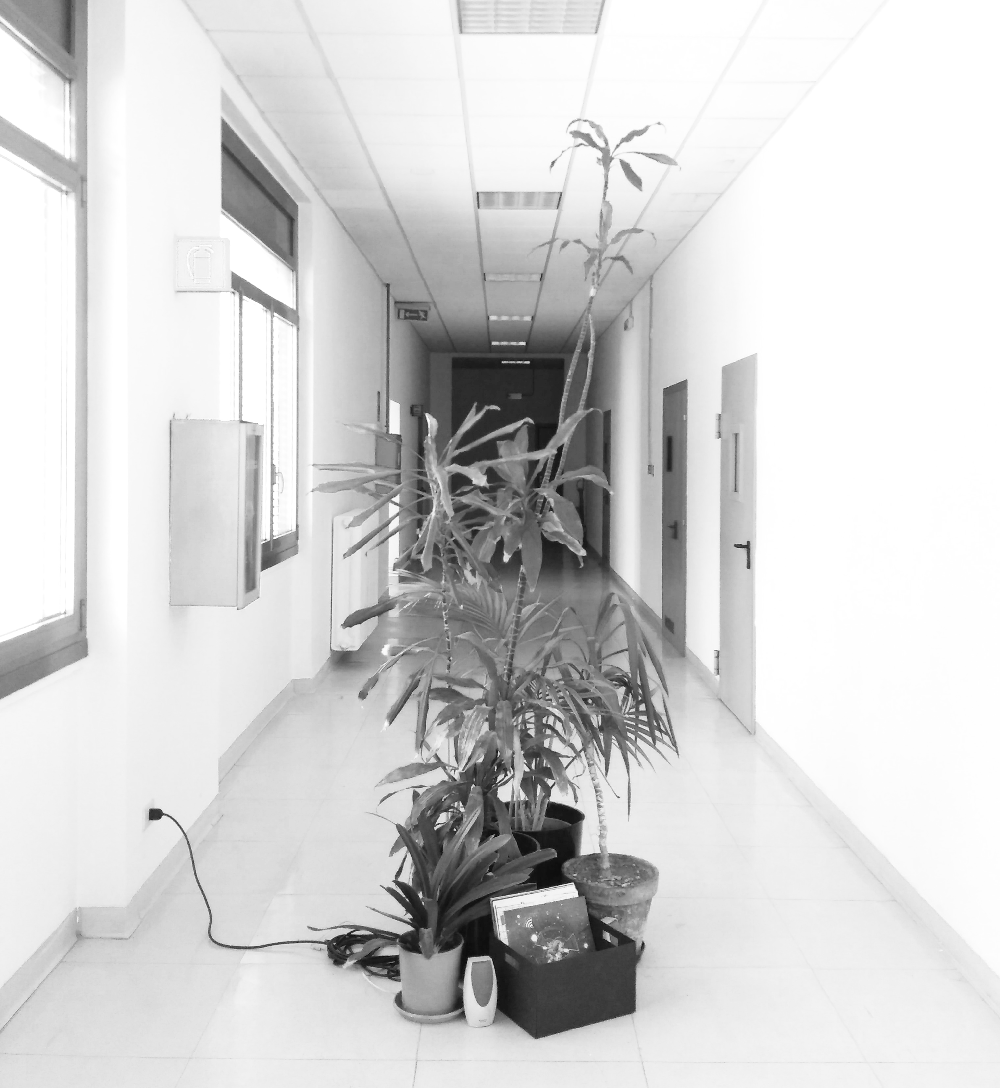 The last day of the workshop we set up a small exhibition. Inspired by the fact that the collages resembled vinyl sleeves, the sampling culture came to mind, which is basically the sonic analogous of collage. So, we created a little jungle island/flea market amist the school corridor, where visitors could browse the collages while listening to a custom playlist about work. Yes, Rihanna was also included. 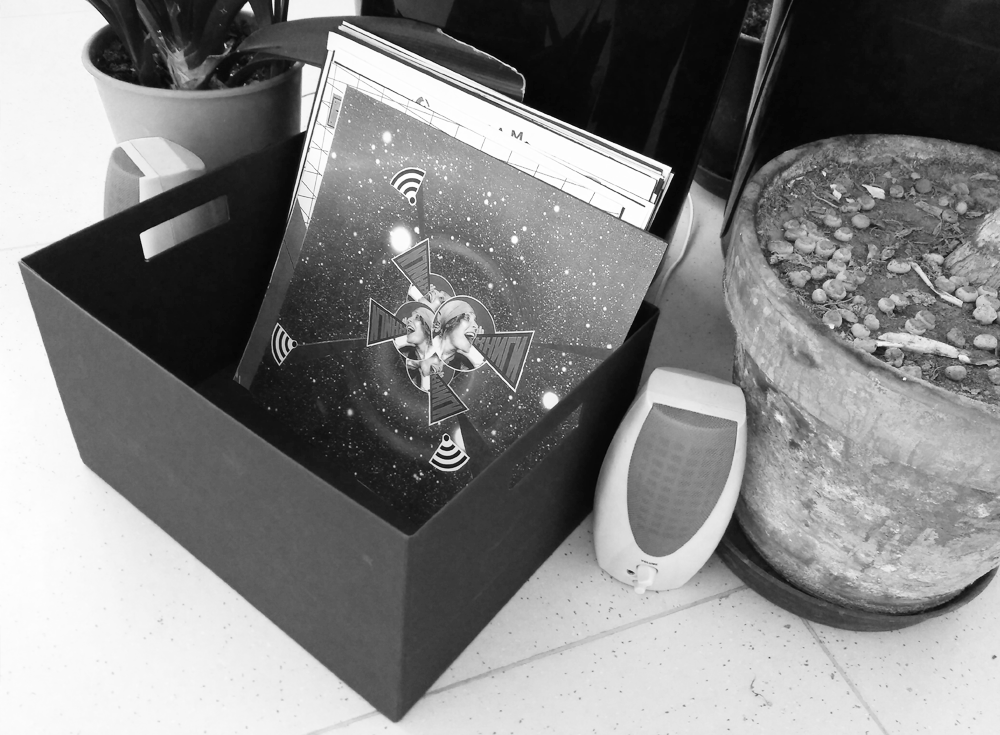