The second problem has to do with the socio-technical conditions. Those can be so widely different, that might be impossibile to make a generalization. And yet, generalize we must if we want to be able to interpret things. If we don’t, we will be stuck believing that each computer experience is different and unique. How to go about with this? In my mind I can easily picture the portion of reality I’m referring to, which is more difficult in words. Actually, this picture is not just in my mind. Here it is: 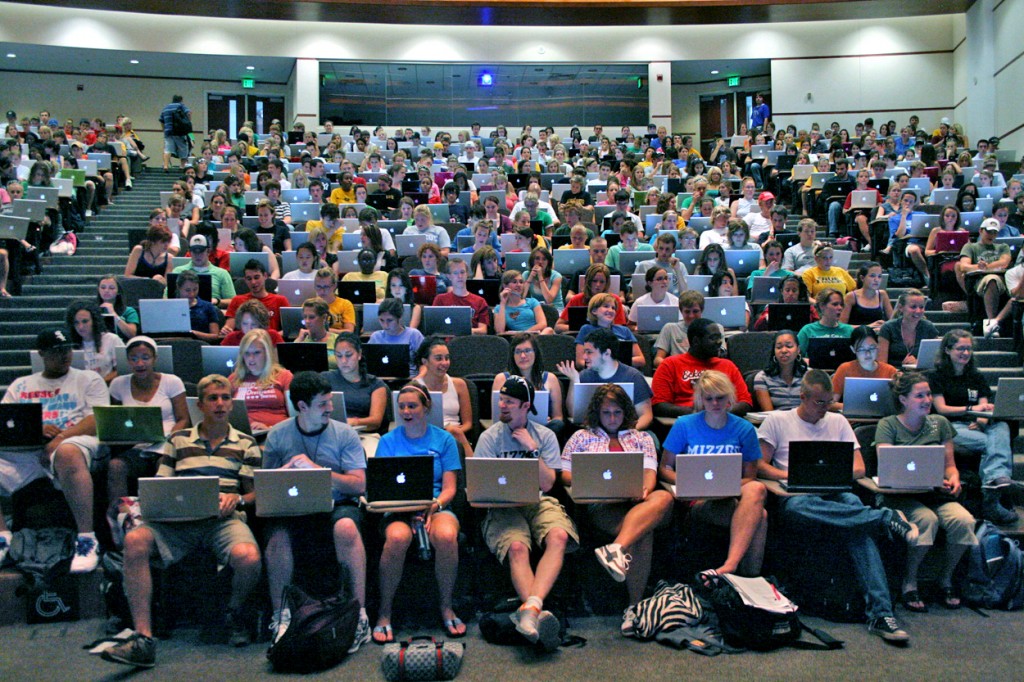 What do you see? Apple (almost) everywhere. Am I then concerned with the (declining) Apple hegemony? Not really. These people might be busy ordering stuff from Amazon, checking Facebook or writing their paper in Microsoft Word. So, Big Tech, the GAFAM, is what I mean! Nope. The range of experience I want to indicate is broader than this and yet identifiable as one. It includes the GAFAM, the user interface of Instagram, the push notification, the “pull to refresh” behavior, the expectation that a note written on your phone will be also accessible from your laptop, the Tik Tok hype and the Facebook tedium, the App Store and Google Play, the new release of Mac OS, Twitter Bootstrap, Mark Zuckerberg saying that VR is the future, your friend’s surprise when they find out you don’t have a Whatsapp account, and the list can continue indefinitely. This very blog, with its Medium.com clone layout, is part of this.

This portion of reality, this culture, can not only be described cumulatively, as I just did, but also negatively, namely, by pointing out what is not. One name comes to mind: Richard Stallman. The way he does his computing is antipodal to this culture.

I’m pretty aware I didn’t do a great job in explaining what I mean, but I’m confident I gave a good sense of it. And things are not black and white: are Slack or Twitch part of this culture? I’m not sure.

I believe that a good way to speak of something is to name it. So here’s some names:

None of them is satisfying. A few might sound derogatory (Normie Computerdom), some too obscure (IThing), or too narrow (GAFAMondo). Some are just silly (the Anti-Stallman). Most of them simply don’t sound good. However, among these there is one that, as Fionnáin pointed out, has potential: Computer Convenientism. I’m reminded of a 2005 essay by Paul Graham:

Near my house there is a car with a bumper sticker that reads “death before inconvenience.” Most people, most of the time, will take whatever choice requires least work. If Web-based software wins, it will be because it’s more convenient. And it looks as if it will be, for users and developers both.

This term has the advantage of suggesting a rationale for today’s computer culture, or more precisely, monoculture, as David Benqué suggested. The rationale is an economic, efficientist one. It’s about seamlessness and straightforwardness. Alex Galloway puts it nicely: “There is one game in town: a positivistic dominant of reductive, systemic efficiency and expediency”. Makes sense to me.

I turned to the Fediverse for help and I generously got some nice ideas (thank y’all!), each one valid in its way because it highlights one of the aspects of such monoculture. Examples of that are Human-Centered Hells or The Californian Cloud Consensus by rra. Both of them emphazise the monoculture’s ideological roots in a discipline (service/interaction design) and in a specific part of the world (California).

I end this list, which you find in full at the bottom, with Brendan Howell’s proposals, that are so vivid that don’t need commenting:

Instead of choosing one term once and for all, I’m going to briefly discuss some qualities of the monoculture these terms are meant to signify.