“Now that the physical has given up on us as if saying: ‘Stop turning every brick of this city into a personal, monetary fetish’, what else is there to observe other than our digital behaviors?”

It is unfortunate that it takes a Corona outbreak to start addressing the politics of boredom, a.k.a. the sweetest controversy to capitalism. At the same time, what’s fortunate about this crisis is the slow-down enforcement in our daily lives, as well as less contribution to the market. On a scale of unfortunate-ility, the most unfortunate fact is that we’re being forced to do/be less by the same regime, which sped up our daily reality a long time ago.

The problem with this is: our imperative to consume whatever the system throws back at us – and to highly depend on it, will not urge us to find our own unique way of doing nothing, in this time when we’re given a chance to.

It’s Thursday night and I’m drinking beers with my friend after work. We wanted to talk about life, but the usual life topics were distracted by everybody around us pulling out their hand sanitizers, and applying the liquid with 90% of alcohol in them, right before drinking from their glasses. Mine and my friend’s hands already had layers of alcohol sucked in – layers provided by the company we work in. The word ‘Corona’ started bursting out of everybody’s mouths and for a moment, it seemed like all our comfortable lives were intruded by it. Smoking outside was not any different; jokes about Corona only illustrated the social discontent with the intrusion. Me and my friend tried to avoid being pulled in a conversational loop about the matter, and instead tried to focus on our usual life topics.

The next few days were marked by the first-wave panic. Checking out the news became an inevitable daily activity as the # of cases was going up. Out of unheard fears from within, some of us were shushing ourselves by reacting hardcore-chillingly to the inflow of repetitive + new information, and pretended to be immune out loud (on social media platforms). The louder the noise became, the louder the silence of our inner voices. When we stopped to hardcore chill, the crisis got hardcore real.

It’s not surprising that we act puzzled and numb, when given a lot of time to pause from imposed productivity in life. Besides staying in touch with friends and family, taking care of each other had an additional layer of activity to it: to panic. To panic even more, if the receiver of panic is not panicking along – to the point when the receiver learns how to panic, returns the panic, and then we all panic together. This chain of give and take reactions soon turned into the new norm of behaviour and became the right way to behave: panic + #staythefuckhome. (If you don’t, emerging experts will give you a lecture, and you’d want to avoid that.)

(“Not to be misunderstood here: I support #staythefuckhome, but not the additional layers of panic as a reaction to having to stay indoors.” – Maisa Imamović)

Once again, remembering our dependency on the regime’s design, where media inflow is a crucial part of waking up, the establishment of the new behavioural norms comes off as a no-surprise, really.

The big question is: How did we materialize the waiting (in which we are still dwelling)?

First of all, we started (1)reading a lot of books. On Instagram. This call for doing nothing must have been an immense, short-lived happiness for those whose piles of books were waiting for them to be read. The joy of reading lasted for about 15 minutes and got distracted by the amount of Instagram hearts received on the live picture of the reader reading.

After a decent amount of Insta-hearts, our feeds were joined by the live streams of the best + the worst of market leaders. Art institutions, yoga centres, raves (entertainment industries), educational programs – they all converted to their online existence, for the sake of saving their continuous production. All in support of #staythefuckhome and #makesureyou’retunedin. It seems like none of the organisations is in favour of cutting down the productivity to zero and re-evaluate their speed of service.

Suddenly, with the increase of live streaming, we decided that books can wait, and it’s time to (2)get back on track, as if easily giving up on the new opportunities that might arise from the radical new conditions. This seemed to be a smooth transition for us, as we already have a lot of experience joining things online more than in real space.

(3)Unstrategic expression of opinion came next. Even though live streams and Corona-related news are now fighting for users’ attention, a new wave of reflecting on the crisis emerged.

Our opinions and borrowed opinions started accumulating in all forms and sizes. The short-lived “slow-down” mentality started speeding up, and the fully digital reality we entered next was that of a knowledge competition, ownership of digital objects(posts/articles/memes) for the sake of strengthening our online reputation in the eyes of the beholder. (If not in times of crisis, then when?)

***Borrowed opinions: Digital objects(posts-articles-memes) shared on social media; probably along with a quote from the object’s content – followed by a personal one-line remark, in order to show what the person who shared the digital “artefact” stands behind/strongly believes in. The person’s goal to enrich one’s online self is bigger than the goal to enrich the discussion. ***

Let’s look at the first and most popular few examples:

The Art World Is Going Digital Amidst Closures. Will it Work?

These were distributed online, and further shaped the general opinion concerning the Corona issue, we can say that the intention behind re-distributing others’ opinions is shaped by the online competition of knowledge. In this way, the noise of always the same online material kills the potential of shaping new knowledge from scratch. Once again, another loss of a given opportunity.

***Another interesting and popular online opinion, specifically related to Corona in The Netherlands: making an (ironic or angry) remark on people going out, while being the person who is going out to check if other people are going out.***

The continuation of our online production and participation creates a new FOMO. Perhaps we can call it a FOMOI (fear of missing out on the information), and perhaps add an optional WFOR (whether fake or real) to it. But what if I went offline? Would I qualify to still join the conversation (shaped by current top-ranked opinions) later on?

­­Doing nothing is a deed of different action. It has no pre-defined endpoint, nor intention to be finished. We all do nothing in our own unique way, because nothingness has a different connotation for each and every one of us. Drawing and laying halfway under the couch for a few hours, could fall under the category of doing nothing. Basically, all activities we perform when we don’t have to do anything (for anyone) are of the same sort. This is why such deeds are of a very personalized nature, and not a customized one. Doing nothing, however, is not as popular as doing is. Most of our precious time is invested in doing (something for something/someone) and our spare time is spent (or, wasted) on the improvement of doing the things we have to do, simply because we lost touch with how to do nothing in our own way.

This Corona case calls for investing time in doing nothing + radically cutting down the production, so that we can re-evaluate what we’ve built so far in terms of knowledge, culture, and economy. Although, it’s a collective crisis and not an individual one, the experience is very personal. And because it is such, it is necessary to establish unique ways of dealing with it, and unique ways of doing nothing. Online rage shows that we’re far from doing that, and are more in favour of re-inventing the old regime and comfort, in the digital spheres.

Douglas Coupland posted a picture on his Instagram account which says: “Doing nothing, is different from having nothing to do”.

Before we start hiring graphic designers to uniquely style our online voices, how about avoid being bored to death and instead use the agony of being bored as a tool to think beyond the boring reality?

***Boring reality: travelling immobile in your room with the speed of light. There, but rarely paying attention to the journey.*** 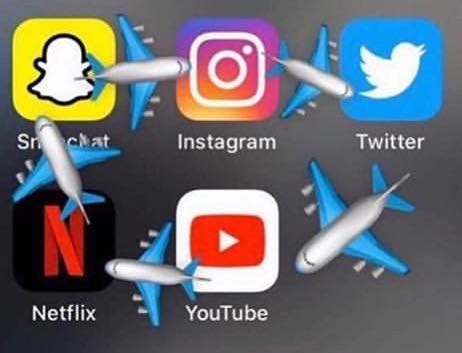 The other night, I had a dream. I was hired by Titanic production to be an Extra in the background of several scenes. Unfortunately, Jack couldn’t impress Rose at first sight, so he decided to become the captain of the ship in order to make her fall in love with him. Before we embarked on the ship, he enters the scene, all suited up and acting like a douchebag. Rose was really not impressed, but ok, we have the whole movie to shoot, so there might be some hope for this guy. I look around and next to me, I see Slavoj Žižek. He was wearing sandals over socks, and holding a plastic bag in his hand. Apparently, he too, was hired to be an Extra. Instantly, I forgot about my role and decided to follow him instead. On the way to leave Europe, we made a short stop in Italy, in a city I cannot remember. I was following Žižek walk up to a beggar, with an urge to ask him “What do you think about the Corona outbreak in 23 years from now?” – I started taking notes and an instant later, I woke up. Later that day, on Instagram account called zlazlojzlizlek, I see the following quote:

“These days I sometimes catch myself wishing to get the virus – in this way, at least the debilitating uncertainty would be over. A clear sign of how my anxiety is growing is how I relate to sleep. Until around a week ago I was eagerly awaiting the evening: finally, I can escape into sleep and forget about the fears of my daily life. Now it’s almost the opposite: I am afraid to fall asleep since nightmares haunt me in my dreams and make me awaken in panic – nightmares about the reality that awaits me. What reality? Alenka Župančić formulated it perfectly, and let me resume her line of thought. These days we often hear that radical social changes are needed if we really want to cope with the consequences of the ongoing epidemic (I myself am among those spreading this mantra). But radical changes are already taking place. The coronavirus epidemic confronts us with something we considered impossible. We couldn’t imagine something like this to really happen in our daily lives – the world we knew has stopped spinning around, whole countries are in lockdown, many of us are confined to one’s apartment (but what about those who cannot afford even this minimal safety precaution?) facing an uncertain future in which even if most of us survive an economic mega-crisis lies ahead…What this means is that our reaction should also be to do the impossible – what appears impossible within the coordinates of the existing world order.”