Late into the pandemic, the University announced a new area on the top floor titled ‘Work&Relax.’ Made up of a set of interconnected rooms, the space is at the far end of the building and appears to have materialised out of nowhere. This area was unknown to students before. Apparently, it is a former daycare.

The announcement came as point 11 in a newsletter providing a long list of mixed updates: 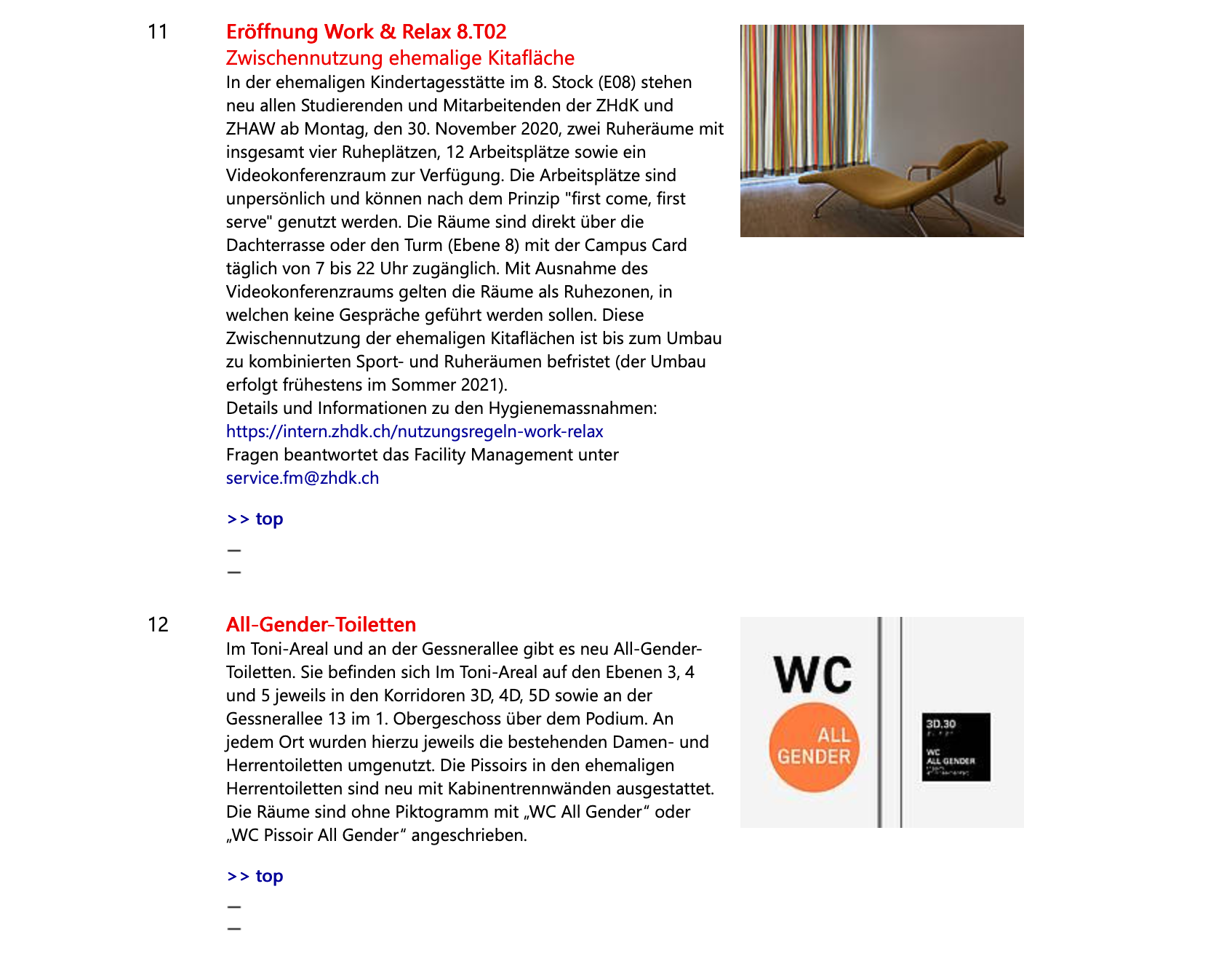 [Translation] In the former daycare center on the 8th floor (E08), all students and employees of the ZHdK and ZHAW will now have access to two quiet rooms with a total of four resting places, 12 workstations, and a video conference room as of Monday, November 30, 2020. The workstations are impersonal and can be used on a first come, first serve basis… With the exception of the video conferencing room, the rooms are considered quiet zones in which no conversations are to be held. This interim use of the former daycare spaces is temporary until they are converted into combined athletic and quiet spaces (conversion will occur no earlier than summer 2021).

The announcement and description of the space, its purpose, and rules of use, was communicated in German. However, in now-typical marketing style, the space has a ‘hip English name’: Work&Relax (no spaces). Once one arrives at the door, an infographic icon of a pair of lips with a finger held up to them, suggesting a ‘shhh,’ tells clearly enough to any visiting nationality that no talking or conversation is allowed. 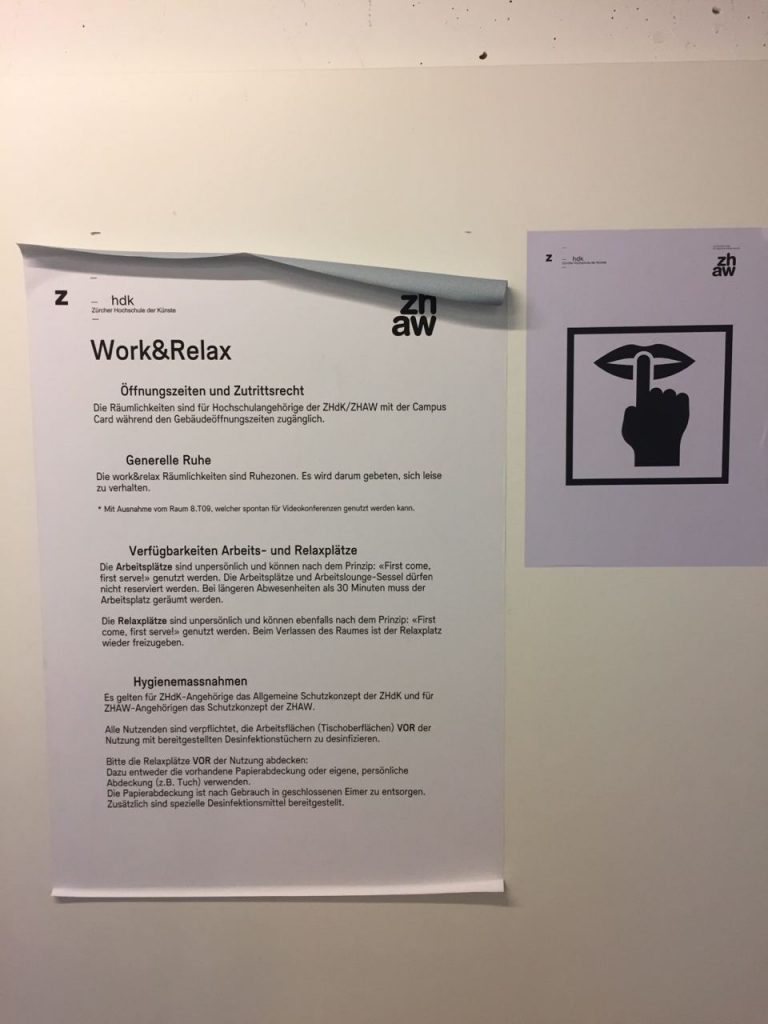 Clearly this is not a space for sociality, rather one for silence and isolation. I visit the space regularly. Not so much to make use of its facilities, rather to indulge in its weird atmosphere (a trip out of pandemic-as-usual within itself), and partially to soft-monitor if anybody is using it at all. Still to this day, I have never seen another soul inside.

After asking around a bit, it seems (still) nobody knows it exists. One friend came with me this week. All she said on entering was ‘Well, this is depressing.’ 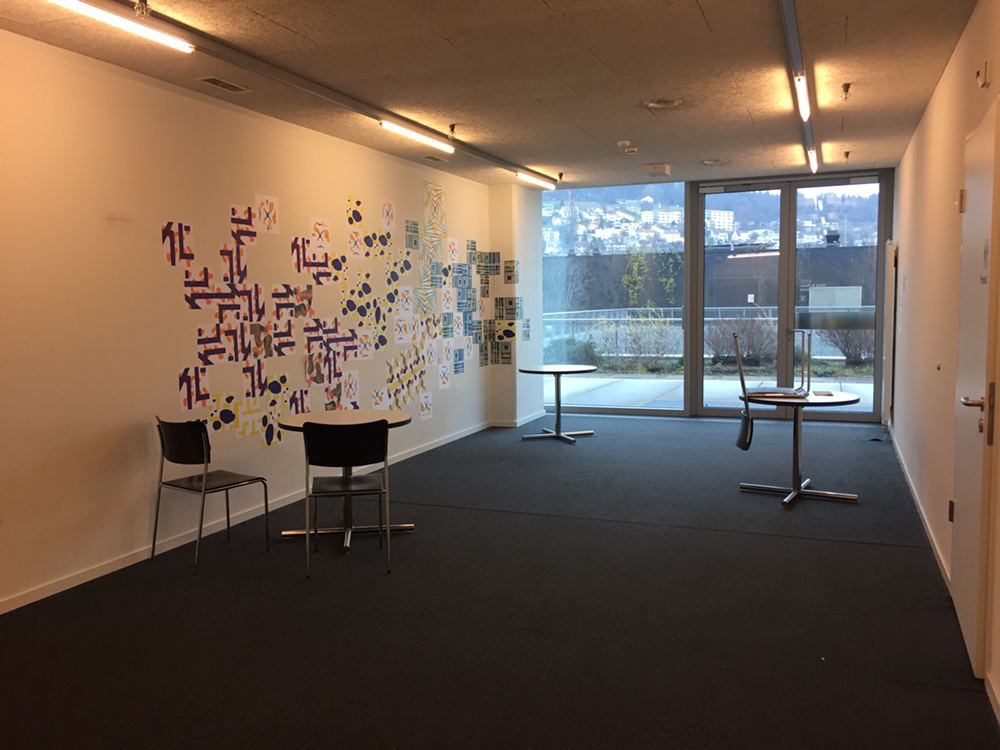 The place is markedly sterile. Yes, in the sense of being clean – punctuated with disinfectant wipes and sprays. The chairs are never-not upturned on the tables, as though it has always just been vacuumed. However the sterility seems more pervasive, beyond mere cleanliness. It is a feeling hanging in the air, like one big waiting room for a children’s doctors. The carpet is an unremarkable dark grey, with an implicit ‘hypoallergenic’ quality. The furniture a mix of office-y desk/chair combos (better, more ‘ergonomic’ chairs than in the rest of the university) with sub-rooms housing loungers in strange acid greens, and more shades of grey, darkened by heavy curtains of cream with vibrant red, blue and yellow stripes. Supposedly, the former are the spaces for ‘Work’ and the sub-room the place for ‘Relax.’

The decor in combination with the name choice Work&Relax make no attempt to disguise this is a rudimentary institutional gesture for ‘increasing the wellbeing of staff and students.’ As with any institutional gesture, whether the space is used or not is beside the point. The point is in the gesture itself: “Look, we gave you a space to Work and Relax, don’t say we’re not trying to help the situation here” (one could imagine the institutional voice might say.) 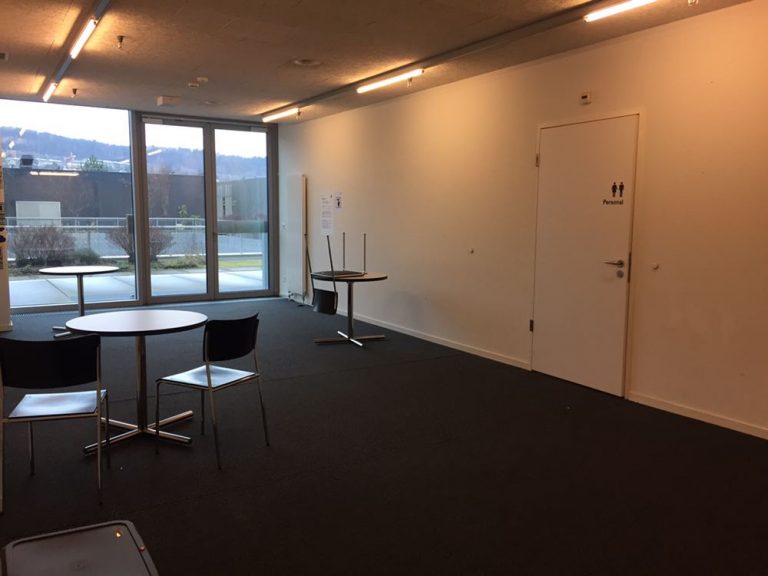 Let’s return to the front door. The one with the shushing lips and the title ‘Work&Relax.’ There is a clash within these two actions, two opposing states on the spectrum of activity: to work, and to relax. Is it their blatant incompatibility which explains the space’s disuse (or, rather un-use)? If one may come here to work and relax, we might question–when I am at work, am I ever relaxed? Or, when I relax, am I somehow always at work? Without time to truly ‘turn off’ from the endless list of tasks, and surrounded by a life lived in infinite possibilities, which inevitably become pressures–must one now merge work-time and relaxation-time? The Work & Relax space seems to reflect the morphing of the home during the pandemic, into an enforced-hybrid of duty, waged labour, and pleasure. There are no boundaries, no spacial differentiations anymore. ‘Never not working.’ We’ve heard it all before.

The implicit suggestion to ‘Work&Relax’ simultaneously starts to sound like the slogan for Josef Pieper’s ‘Total Work’. In his book Leisure: The Basis of Culture (1948), the German philosopher coined the term ‘Total Work’ to describe the process by which human beings are transformed into workers and nothing else. “By this means, work will ultimately become total… when it is the centre around which all of human life turns; when everything else is put in its service; when leisure, festivity and play come to resemble and then become work; when there remains no further dimension to life beyond work; when humans fully believe that we were born only to work; and when other ways of life, existing before total work won out, disappear completely from cultural memory.”[1] Work&Relax Into It. Work&Relax About It.

The pandemic has ushered in the final stages of Total Work. Accept it. This is how it is. Stop fretting. Just relax and get on with it.

How would it feel to enter this space if the title was flipped, if the room was named ‘Relax&Work’? The inversion suggests something more sinister. It sounds like a trick or a trap, as though the punctuation is really implying ‘Relax… & Work.’ One can imagine a hyped-up version of the university board, sitting around a table at their meeting on corporate wellbeing. Let’s listen in as they discuss the gesture of offering a quiet space: ‘We could lure them in under the guise of relaxation. Once they enter the room, we’ll jump out from behind the striped curtains and say, “Ah ha! Gotcha! You can sit on the lounge seats–but you still have to work!”

All of this becomes more plausible in the absence of allowed sociality. The rules of non-interaction, of Total Silence, appear to erase any sense of potential enjoyment. Falling closer to another designated space in what Stefano Harney and Fred Moten call the ‘academy of misery.’

“…that’s the insidious thing, this naturalisation of misery, the belief that intellectual work requires alienation and immobility and that the ensuing pain and nausea is a kind of badge of honor, a kind of stripe you can apply to your academic robe or something. Enjoyment is suspect, untrustworthy, a mark of illegitimate privilege or of some kind of sissified refusal to look squarely into the fucked-up face of things which is, evidently, only something you can do in isolation.”[2]

Work&Relax. Relax&Work. From the desks in the space, you can see the rooftop terrace of the building. In summer, it bustles and shines. In the winter, it is whitened by snow and deserted. Though a voice still speaks from one of the walls, those holding up an open structure the covers a long wooden table with matching bench seats. Behind three empty chairs, graffitied in blue against khaki green, the message says; no rest 4 the wicked. Speaking straight from the heart of the Work&Relax gesture, to the lonely Total Work souls who dared to come inside. 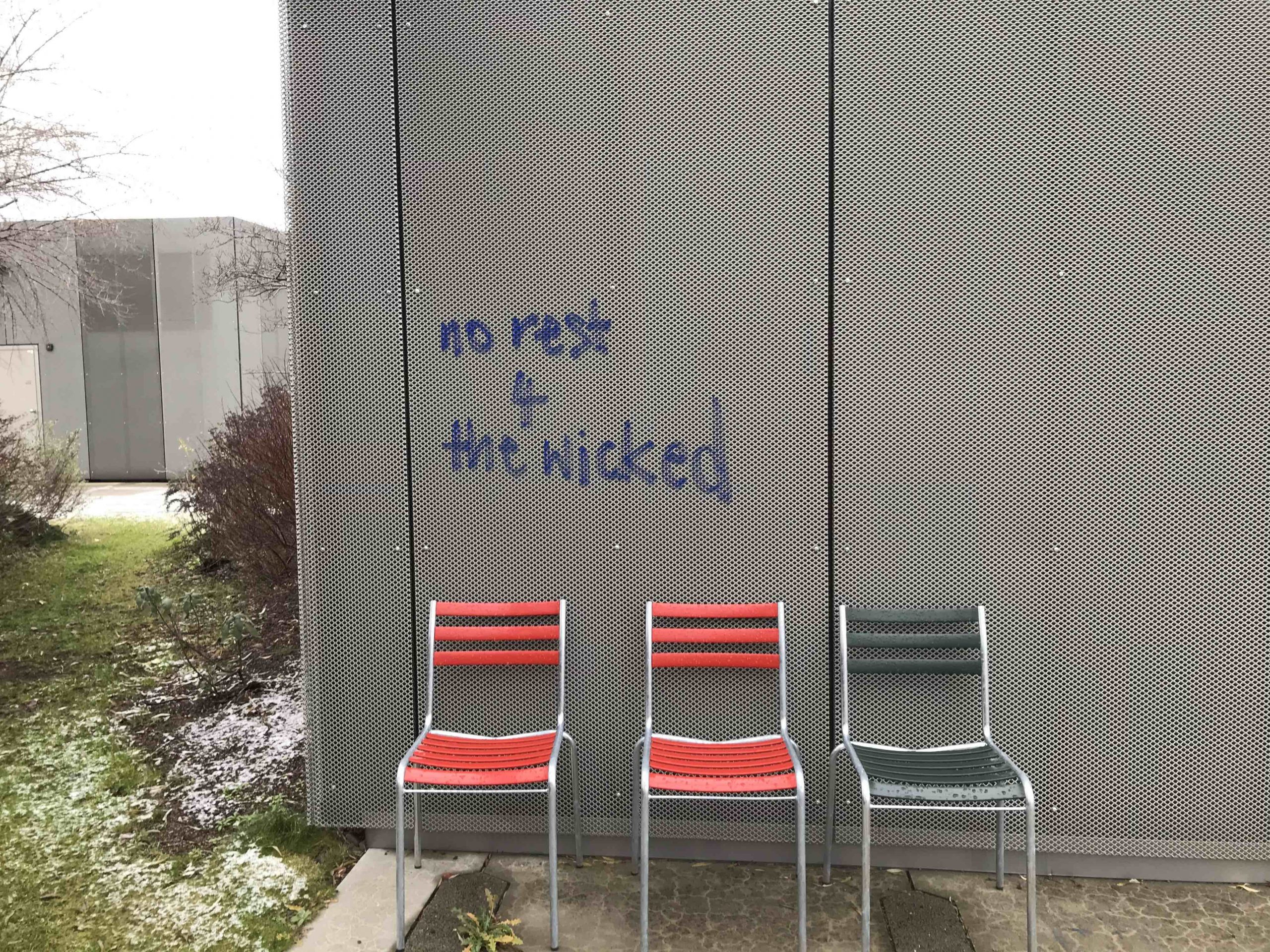