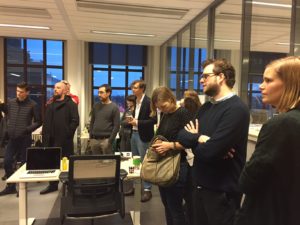 Interconnection and resilience within the publishing workflow

Media monopolies tighten their hold on the production and dissemination of content. Both in the digital and social media sphere, where big companies such as Facebook and Google call the shots, and in the world of book publishing, where publishing companies operate in ever larger constellations. Oftentimes these organizations hold on to traditional ways of publishing when it comes to content, form, production workflow, dissemination and business models.

Digital innovation has long promised a renaissance in the publishing industries. But while this has come true for other markets, the field of publishing still seems to struggle with technological innovations. Digital tools are mostly applied to make existing workflows more efficient or to cater to the demands of the upcoming yet minor e-book market. Bottom up innovation is still minimal. However, like one of the participants in the discussion stated: ‘The future of digital publishing is the future of publishing in general.’

Towards resilient publishing
The Institute of Network Cultures and its consortium partners want to investigate how digital technology can make publishers and their surroundings – readers, writers, editors, translators, designers, programmers, printers – resilient. Within a tough economic climate, especially for smaller, specialized, culture-oriented businesses, innovation is necessary in order to secure the future.

Bridging the divide
Many publishing companies work within the age-old communication model of ‘sender-message-channel-receiver’. There is a message, constructed by an author, which the publisher sends to a reader in the form of a book. It is a top-down or one-way mode of communicating. Room for feedback is minimal. Innovation is mostly applied to the way the message is produced or sent.

Is it possible to make the role of the receiving end more prominent and connect it to the other factors in the model? Can publishers, producers, books and readers be interconnected through collaboration in the whole production cycle, from conception to dissemination? ‘Readers’ in this respect are not limited to individuals who buy, lend, read and share books, but can also be conceived more broadly, as institutions, communities, libraries, and even schools or universities.

Who is the reader; what is public?
The reader is usually seen as the end point in a business model and as such conceptualized as a consumer, who is not very interested in anything other than the product he or she is after. To put it bluntly, as one of the discussion participants did, ‘The reader is notoriously lazy, distracted and bored.’ This seems to be the case when one looks at feedback rates of readers online: less than 10 percent is interested in commenting or participating in online discussions. Students offer another example: they mostly want to be able to study texts in their books and are not so much up to interacting with the material.

Other, more imaginative ways to construct the role of readers are however possible. For example, can we think of a reader as designer, administrator, performer, or distributor? The whole chain of actors involved in the publication can be opened up and interconnected with each other and the product. First, the publication itself is always the result of a collaborative effort, comprising the author(s), editors, designers, translators, the publisher, and so on. Next, it speaks to a community of people concerned with the ideas and production of the content; it reaches out to peers, to its field of interest; and further to the general public, maybe moving beyond borders of language and even time.

The line between the producer of a book and the reader as a consumer is often drawn artificially along traditional lines referring to copyright, authorship etc. But the reader and the public are no singular notions. How do we construct or imagine the public? What kind of biases does this notion incarnate? These notions need to be opened up towards the public itself, so as to include rather than exclude.

Engaging with high-quality content
Within the digital context consumer and producer have conflated a considerable time ago, albeit within the context of large media or tech companies. This has ultimately led to the algorithmically curated newsfeed, catered to the personal needs of the targeted reader, who at once is producer of the feed (since it is made up from his/her previous clicks and preferences) and consuming it. This situation has come under a lot of scrutiny, mainly because of two problems: first, the means with which this ‘automated curation’ is carried out remain invisible, and second, there is no check on the inherent quality of the content that is being produced and as such publicized.

The two problems seem to be connected. In order to do a check on quality, the participation of all people involved in the process, including readers, programmers and editors, would be helpful. Opening up the black box of automation can help the quality of the publication. To accomplish that, a focus on interaction, sharing and ‘conscious curation’ is essential, building bridges between and across sender, message, channel and receiver. Digital technology can be helpful in this respect. Beneficial uses of automation, put in the hands of people themselves, are imaginable when it comes to publishing.

A concern for opening up the relation with the reader and putting a stronghold on interconnection raises conceptual questions around the politics of publishing, but always leads directly to a very practical application in the industry of ‘making public’: publishing as an act that should be considered in direct connection to the people, business models, innovative processes and applied technologies surrounding it.

Concrete methods and themes
We want to examine the general question how to produce interconnection within a technological context through several case studies, with themes such as: wiki to books, personalized publishing (‘autobotography’), curation of content on platforms, collaborative writing, social reading, and publishing as event.

This is to be done always with an aim for transparency and independency, opening up the workflow and using digital and automated tools to their advantage, and with the goal of developing a mode of publishing where content and form are of high quality and connected to and informed by each other.