[A version of this was published – as – Mauro-Flude, Nancy (2020) ‘Is That All There Is? The Critical Role of 21C Mediums’. NiTRO 32, The Australian Council of Deans and Directors of Creative Arts. December. Ed. Kit Wise. ]

…I stood there shivering in my pyjamas and watched the whole world go up in flames.
And when it was all over I said to myself, ‘Is that all there is to a fire?’…

An the dawn of the C-19 pandemic, last summer of 2019-20 many Australian’s (once again) witnessed parts of the country go up in flames. Since then many varied viewpoints in regard to: climate change, health, economy, politics and identity and so on whirls amongst the interstices of the planet through vernacular news feeds, word of mouth, graffiti, 5G tower arsonist sabotage and other various forms of internet folklore. Particularly on social media platforms many of us witnessed a prevalence of ‘blaming the other’ or the repetition and variation in a proliferation of conspiratorial, malevolent and / or humorous memes, manifested by people ‘trying to make sense’ of an obscured and incomprehensible crisis.

Many of lives were profoundly altered, some of us began to ponder about the veracity of predictive machine learning technologies, if we hadn’t had started to already. In the ‘ding’ of an email arriving, the ‘clang’ in Microsoft Teams nudging us along to their next meeting, or catching oneself doom scrolling through the bizarre circus of Internet memes. In all of this crucially the broader public, who might have never otherwise, began to consider the consequences of the increasing extent of automated digital systems into their everyday lives. These infrastructures were previously inconspicuous in their infiltration of our domestic space have now become (slightly) more perceptible in their push to measure and optimise our every living moment, in the guise of streamlining our labour for the benefits of productivity. 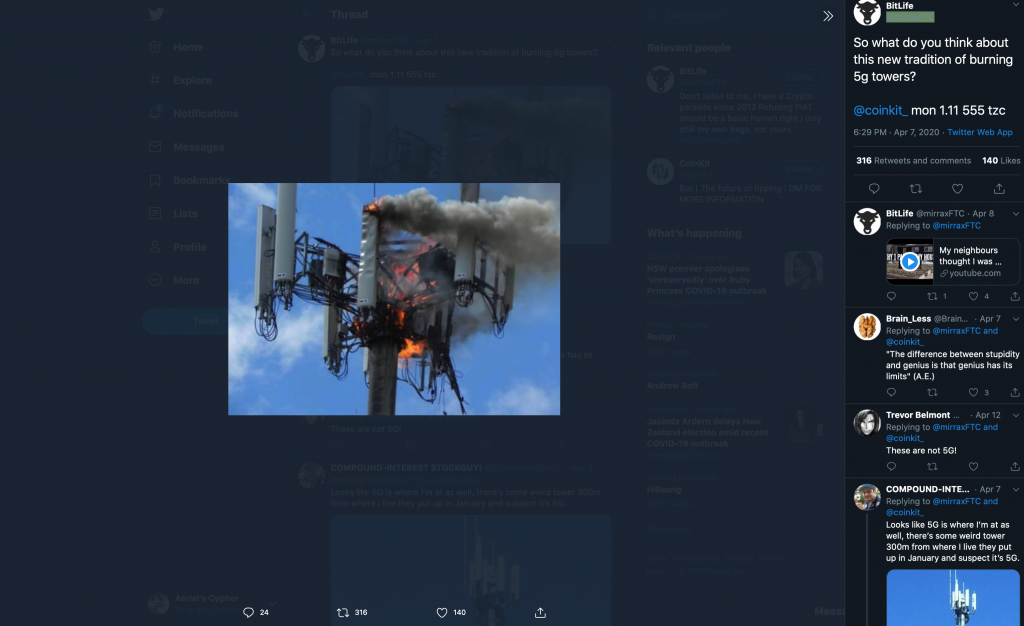 In retrospect it now seems almost uncanny that prior to the global C-19 outbreak, the ‘arts’ was removed from the title of the relevant Federal government department (December 2019) partly on the grounds for need to ‘improve decision making’. There is a deep irony in the fact that it is artists who typically possess high-level decision making skill sets and agile abilities to grapple with various scenarios through on-the-fly improvisation or salubrious dances with their medium. The wilful exploit by the Australian Prime Minister, stating “Having fewer departments will allow us to bust bureaucratic congestion, improve decision-making and ultimately deliver better services for the Australian people” (Scott Morrison 2019), showed a disregard for the socio-cultural, ecological and technological realities of the so called, fourth industrial revolution. The reality on the ground is that as emergent technologies arise as key actors in our public sphere—especially through ubiquitous personal computer and mobile digital culture consumption—unequal access to information and services due to varying levels of digital literacy are increasing in Australia (Thomas 2017). The infrastructures that the government is heavily investing in, the sweatshop data centres that host these automated computational server stacks contribute to the depletion of energy, water and minerals. Incongruent with so many communities intimately tied to their sacred lands and sea country where such these elements are found to be and are thus mined, excavated and depleted.

It is the artist’s oeuvre that provides nuance, insight and potent understandings of a milieu through their ingenious ability to mediate, interpret and probe current affairs that may enable new knowledge to flourish – if they are validated to be as such. Done well, the indeterminate processes of artistic research, can offer compelling innovations like no other field. Artists who possess this tacit knowledge are able to reveal vast imaginaries and knowledge that is less acquiescent to rote learning and automation, because their work is distinctive and often counter intuitive to mechanical substitution. Australia is home to some of the best practitioners who reveal the veracity of digital infrastructures through poetic and performative means. One exemplar is the group VNS Matrix who in 1991, three decades ago, claimed on a public Billboard they are “saboteurs of big daddy mainframe” inquiring about “the virus of the new world disorder”. Predictions of imaginary technological futures like these not only elucidate the imperative role art plays in the community sphere by pointing to mechanisms that are unseen or too intimating for the lay public to want to contemplate can enable public imaginary by enticing creations that allow a window in the previously unknown.

Veering away from using these tools to accomplish an instrumental chore marks a further shift within the disciplinary field of art, away from conventional modes of production in the quest for an expanded repertoire in a bid to engage more perceptively with more-than-human phenomena. Simultaneously reappraising emergent technologies processes, systems and networks as 21C century art forms, a case study for such claims recently took place at the launch of the Economythologies.network [#EMLX], as a part of the Institute of Network Cultures MoneyLab#X series. The first in the chain to be held in the southern hemisphere. This multisite event livestreamed remote presentations and performances, in collaboration with satellite venues Ainslie+Gorman Arts Centre (Canberra, ACT) and Bett Gallery (Hobart, TAS), November 5-6 2020.

The venture to foster more scalable approaches to digital trade and consumption of artistic assets to positively augment broader understandings of what affects our collective health, our politics and most prominently our culture and in order to develop customs of engaged autonomy. By engaging partners, artists, researchers, curators, collectors, technologists in a profound interrogation and re-imagination of the economic systems, technologies and cultural discourses considering:

Co-conveners – Denise Thwaites, and I  – in collaboration with our crew, will now embark on an asynchronous artistic program rolling out through 2021 and beyond.

At present we have an overwhelming opportunity for a deep-seated coming together of diverse viewpoints to advance robust discussion to embrace real world problems many of us share. Not only am I stressing the need to push for transdisciplinary happenings in localised public forums, but I’m calling for us to create, or at least be able to become aware and accustomed of these infrastructures. To reclaim the micro-mobility of the apparatus and lobby be climate friendly and situated in its ubiquity. This appeal is not at all related to cultural affinities with luddites or, pragmatic eco-conformists who seem to step over the people in the street to save the whales, of whose ocean they pollute with the microfibres of their ‘Kathmandu’ uniform. But is more akin to the free culture spirit and politics born out of the assemblages of the 20C Dada political cabarets. 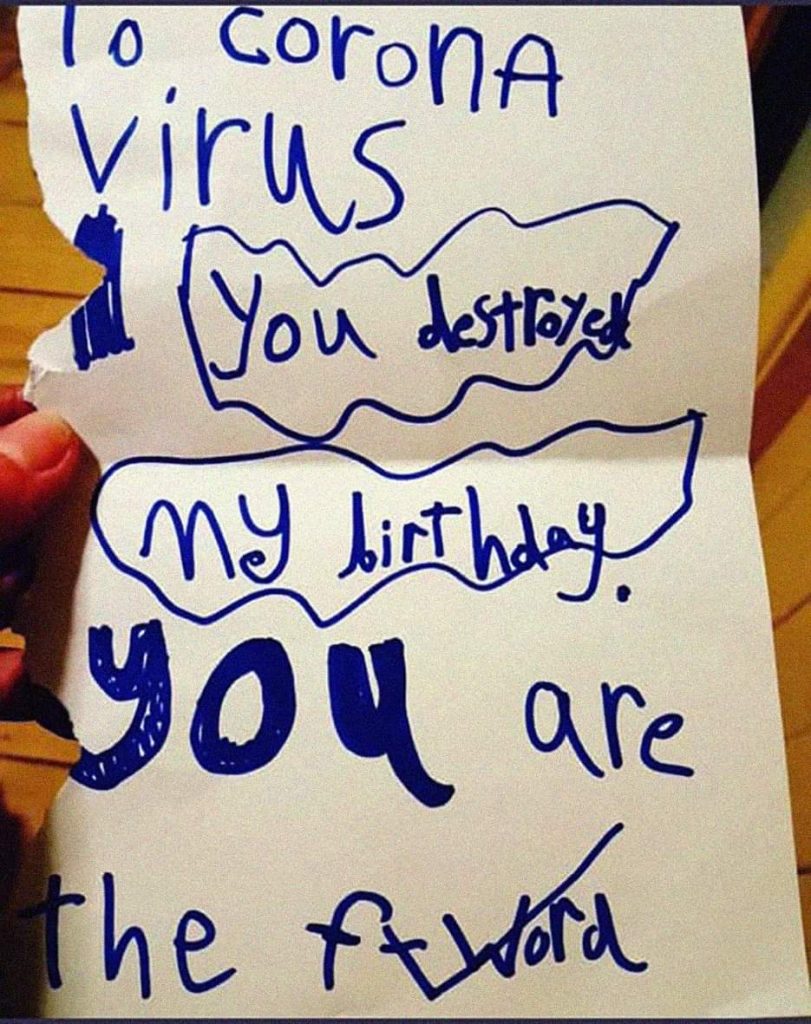 A friend whose child wrote a letter to the Corona Virus

Risk taking eclectic artists whose cut up and chance based works were able to comprehend the unforeseen impacts of the parthenogenetic multispecies cabaret of which we are in the midst, a century before. Such experiential approach carries a compelling pathway to arousing public literacy (somatic, visceral, digital, social, aesthetic) more broadly. Thus to stimulate mindfulness of alternative applications we can reimagine the role of public communication infrastructure through shared conversations, multi-faceted platforms for symposia, online performances, exhibition(s), and experimental digital publication(s) in the pursuit of cultivating for new knowledge production that responds to the specific challenges of our 21st Century.

We need to explore collective distribution methods such as blockchain (digital public ledger record-keeping technology) built on low impact infrastructure driven by wind and solar power as potential mediums to create with and simultaneously support, present, fund, sustain, and archive 21C art practice. In an epoch of endless ‘strategic plans’ and alien ‘business models’ we are asking how can artists and creative professionals continue to subvert capitalistic logics to support and stimulate diverse creative livelihoods and communities?

Aesthetic reflection through and with emergent technologies consumption and trade capacities, innovates the way the digital automation can be tangible, brings about an enabling potential just as it subverts and debases previous norms and conventions. This addresses digital exclusion so that diverse artistic communities may be interconnected and mobilised through experiential learning – shared knowledge – being open to the value of experiencing networked art in action. The successful implementation of a system for value transactions of art in the digital domain entices us through its electro-wetting biopolitical dynamics. 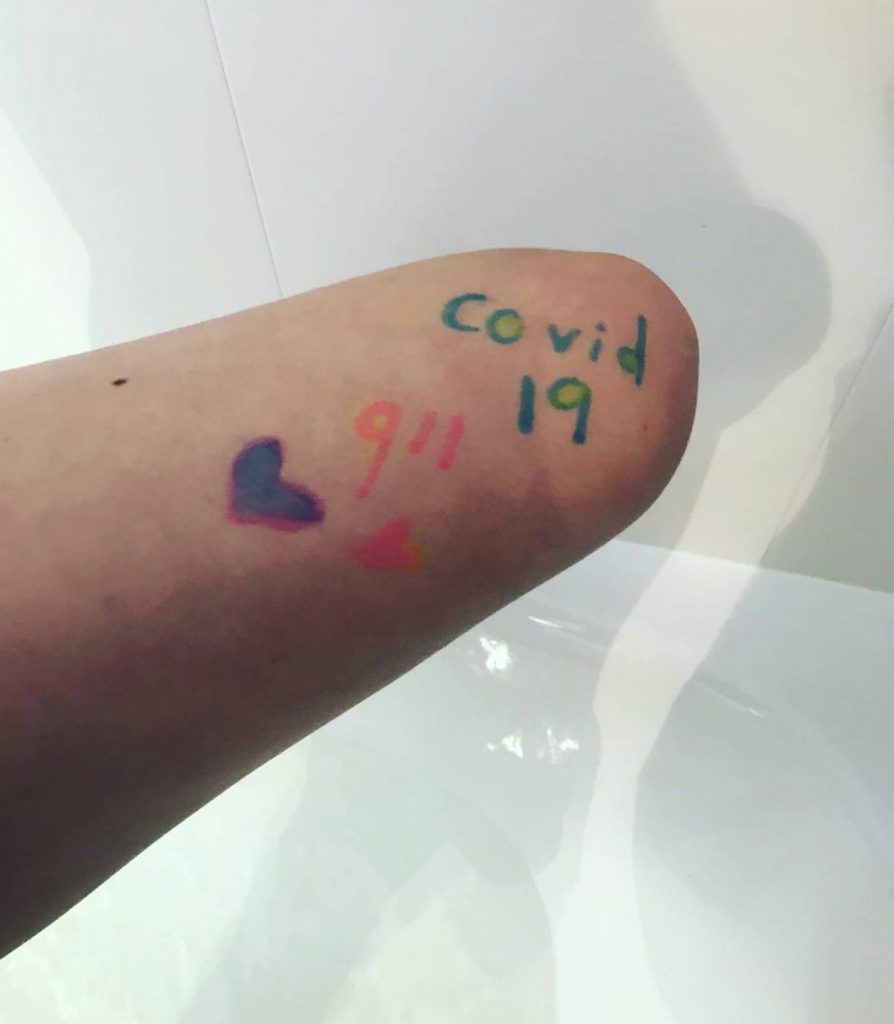 A 9 Year old’s leg with graffiti taken after school at the Advent of C019 March 2020 Image: Photo in a Text Message from a Friend.

In response to the techno-cultural imbroglios encountered by many in the over-reliance on the internet to enable work, life and socialising during the C-19 pandemic many of us are compelled to renew values of process, participation, and indeterminacy. We need a more  prosperous implementation of a system for value transactions of artistic assets in the digital domain and these insights should be handled carefully to steer away from the forces of expedience and digital obsolesce. Not through the supremacy of manipulative agendas of conglomerates that pursue connection to coax by reading people’s subtle emanations and signals with acuity and using that knowledge to coax them into a world which they didn’t intentionally opt in.

Before we rewrite the regulations – and we need to understand the maladies, on the various levels of the micro, the nano, the cellular, to the macro. Because eventually all of these steam from the visceral systems that form our planetary archipelago. We promptly need to listen carefully to our senses and then act in a scrupulous dance with 21C mediums to summon a requiem for a more poetic future. Conjuring new (and very old) networks of interrelated entities that inhabit humans and non-humans alike, resound through the boundless affordances of our cultural lives and wellbeing. Because if we so choose to disregard the insidious magnitude of the fourth industrial automation, in our contemplation of aesthetics, we will be continually plagued.

Fragments this text were written in collaboration with Denise Thwaites co-convener in the press release and preface for Economythologies MoneyLab#X http://economythologs.network

A been previously published in an opinion piece Mauro-Flude, Nancy (2020) ‘Artistic Way to Tackle a Thorny Issue’ The Mercury, p.23 https://www.pressreader.com/australia/mercury-hobart/20200213/page/23.

VNS Matrix (1991) The Cyberfeminist Manifesto for the 21st Century https://vnsmatrix.net/projects/the-cyberfeminist-manifesto-for-the-21st-century