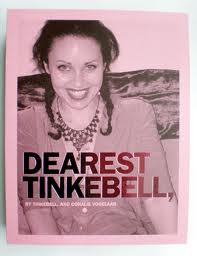 After the artistic and often humoristic projects of the students of the Piet Zwart institute in Rotterdam in order to criticize dominant social media platforms, Coralie Vogelaar gave us an interesting point of view on hate mail in the context of privacy.

In response to the huge collection of hate mail that Vogelaars friend Tinkebell had received for turning her cat into a handbag in the name of art, Volgelaar decided to turn the roles around and opened an investigation into the people who send these hate mails. This project resulted in a book called Dearest Tinkebell, which includes all the thousands of hate mails and information about the senders including their photos, addresses and personal weblogs. “Most of them seem like very nice people”, Vogelaar explains. In turns out that people who send hate mail are a lot like you and me. To make her point, Vogelaar demonstrated that the people who send hate mails are actually a lot like the students of the Piet Zwart institute who just presented their work..

What Vogelaar for instance noticed is that some of the hate mail senders like to make pictures of themselves and tend to show some narcissistic character traits. Which isn’t a surprise because according to research, narcissistic personalities have the tendency to think they are right. Doing a web search on the Piet Zwart students, Vogelaar concluded that some of them also had similar ‘narcissistic tendencies’ and she had the Facebook pictures to proof it. This also turns out to be the case with other particularities such as posting comments/ photo’s regarding drinking, behaviour that some of the students of Piet Zwart institute also tend to exhibit (although surprisingly few).

Of course Vogelaar didn’t want to accuse these students of being hate mail senders (although they could be). What Vogelaar tried to point out in contrary to the prevailing view on privacy, is that in the end privacy isn’t only violated by institutions and that Big Brother isn’t only some high institution or social media platform like Facebook. Privacy violation also works peer-to-peer because in the digital age, we can all keep an eye on each other: “We are our own Big Brother”.