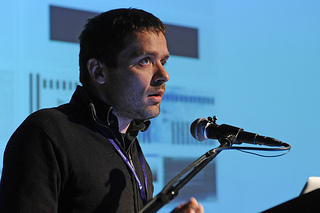 considers social media as both his found object and his blank canvas. As part of the second session , Artistic Responses to Social Media, at Unlike Us #2, Cheseneau talked about two of his visually stunning projects. First up was Facebook Feedback, an initiative that consists solely of art that he created through his Facebook profile. Videos, images and code already existing on Facebook, as well as screenshots taken from Timelines, are transformed into collages and entirely new imagery. The visual material is then reloaded on Facebook, directly into a new creative space. After stressing that post-production is kept at a very safe distance, Cheneseau notes how he utilizes different graphics and tools such as Glitch in his artistic process.

(Click here for the video of Thomas Cheneseau’s presentation)

For Cheneseau it is important to elaborate on how his approach does not resemble other artists’ approaches to social media. For instance, he did not specifically select Facebook as his object of research as other critical artists might do. He merely considered the social network to be a most convenient canvas for his conceptual art. The main reason lies in its lack of limitation when reappropriating user profiles. Existing restraints in the interface, such as size and functions, are defied by Cheneseau, but always to benefit the visual aspect of his art. The ultimate goal is to creatively counter the linearity of Facebook’s timeline, both in time and space. Cheneseau goes on to show lively examples of Facebook fan pages as his new playground. Again images from the social network are reappropriated, only this time around built up into modern-day iconography.

In 2009, Cheneseaus started work on the second project he selected to discuss at UnlikeUs #2, Hekkah Awr. The project refers to acting without reality. It is a Facebook-based project as well as an interactive installation, where the program used collects news feeds posted on Facebook and generates them into new images and video’s in real-time. In their reappropriated form, the news feeds find their words and sentences transformed into avatars and more in various shapes and sizes.

Every creative thought and process he described throughout his talk, Cheneseau illustrated by showing an array of examples taken from his “facebook art”, which added a burst of color and complexity to his otherwise unpretentious presentation.