Dmytri Kleiner – the surprise speaker in the session Artistic Responses to Social media-  presented three examples of free, open-source platforms created by himself and the Telekommunisten. All three art projects, Thimbl, R15N and deadSwap aimed to revolutionize communication through performative, artistic interventions.

Starting his presentation, Kleiner highlighted that the Internet has always been about sharing and that it has always been decentralized. In this manner, the issue that we need to investigate is how we ended up having centralized social media monopolies from a very decentralized, multi-layered, distributed system.

(Click here for the video of Dmytri Kleiner’s presentation) 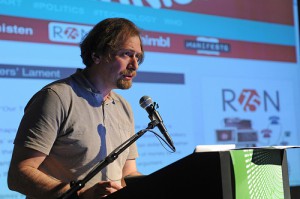 Kleiner’s first example of a performative alternative to social media, Thimbl, is a free, open-source microblogging platform. Initially launched in Transmediale 2010, Thimbl is decentralized, needs no software, implements the Finger protocol and is written in open-source code. Contrary to the broadly used microblogging platforms (like Twitter) when using Thimbl, you can be followed at your own domain.

Following Kleiner, Thimbl is something more than a social networking platfotm: it is essentially a performance of economy and social fiction. More extensively, the capital and society have to transform Thimbl into being and Thimbl will  become reality once society and economy  transcend its limitations.

Thimbl demonstrates the potential for integrating classic internet technologies into the Open Web. On the surface, Thimbl appears to be yet another microblogging service, similar to Twitter or identi.ca. However, Thimbl is a specialized web-based client for a User Information protocol called Finger. The Finger Protocol was orginally developed in the 1970s, and as such, is already supported by all existing server platforms.

Thimbl offers no way to sign up. It is up to your own webhost, internet service-provider or system administrator to provide accounts. Virtually every server on the intenret already has Finger server software available in its software repository. All that is required for any organisation to provide Thimbl accounts is to simply turn their Finger service on. In most cases, this would take the server administator no more than a few minutes, after which all of their users could log in to thimbl.net and participate. So Thimbl is a call to arms for users to demand this option.

Most importantly, Thimbl has embedded within it a vision for the Open Web that goes beyond the web. For the web to be truly open it must integrate pervasivaly in to the internet as a whole. The internet has always has been much more than the web.

Dmytri Kleiner also introduced us to the R15N system, the official miscommunication platform of Transmediale 2012. This system revolutionizes communication as it works with any telephone, requires no phone credit and has the potential to share a message with an entire community. The system works through the construction of “phone trees”: its users subscribe through their phone number and send their message to a randomly selected recipients. The message is then broadcasted to the telephone network and will pass through its various nodes. Finally, the whole network is aware of the content of the message and

“With a bit of co-operation, R15N allows one call to reach an entire community!”

As a platform, R15N aims to demonstrate how data is distributed through a network. Moreover, R15N works through the co-operation of randomly selected people, determining the connection between the users. It is an experimental artwork that encourages community engagement and communication, forcing its members to act outside their social safety net.

Finally, Kleiner presented deadSwap: the offline file distribution system where participants are asked to covertly pass a USB stick from one to another.  deadSwap was created as a social experiment of an offline, anonymous network of users based on the distribution of data, following SMS requests. Kleiner noted that deadSwap aimed to underline privacy concerns and experimented on circumvention techniques, the same way the Web 2.0 Suicide Machine offers an exit from social networking platforms. Ideally, the anonymous  network would continue to swap files indefinitely.  However, before the end of his presentation, Kleiner admitted  that few deadSwap attempts survived longer than few hours.

If you would like to experience  R15N, the official miscommunication platform of Transmediale 2012, register on the project’s website and don’t miss the next live exhibition on March 19th.