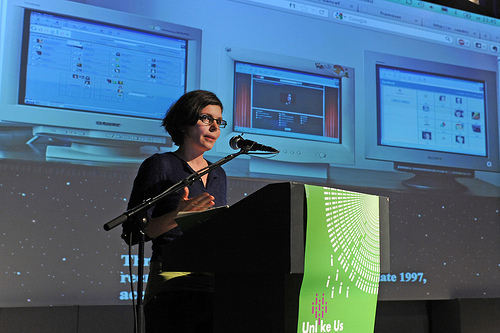 Olia Lialina took the stage in the 2nd session of UnlikeUs #2, Artistic Responses to Social Media. During her presentation she introduced artwork she had created together with Dragan Espenschied. Using the notion of  ‘digital folklore’, Upon (2011) is their most significant contribution to the theme of social media, as it reinvents current such platforms “with the technology and spirit of of 1997”. Lialina explained the choice for this project by pointing out the incomplete documentation on the 1990s Web. Driven by the inability to receover the non-archived Web, Lialina and Espenschied productively mobilised their own assumptions, based on fragmentary memories of actual participants and the “best effort” archive The Wayback Machine. Lialina was quick to reassure no forgery took place: the interpretations of Facebook, Google+ and Youtube are created with technology available in late 1997 and are viewable in Netscape Navigator 4.03.

(Click here for the video of Olia Lialina’s presentation)

Frames were some of the new features of the ’97 Web and, for the first time, allowed several HTML elements to be shown in the same window. Both extremely popular and controversial due to its problematic implementation, the frame disappeared from use in websites after 1997, an era during which it was quite successful and widespread.

Other quirky and clever features typify the precarious re-designs of the three websites: Google+ uses tables to arrange profiles in a circular manner, Facebook has a low-definition brick pattern as the background for its Wall and can’t fit more than 16 friends on a page, while Youtube videos by design are few and lack details, needing ages to load.

These implementations aimed to go beyond the technical, simultaneously trying to echo the paradigm of  how ‘the social’ was understood in Web ’97, which gives the works its sense of melancholia and longing for a past that never existed. Lialina succeeds in reflecting on contemporary Web realities by displacing these popular monoliths into an asocial Web that was – or seemed to be – relatively removed from the direct interference of large corporations.

Other reasons to choose the year of Our Lord 1997 was that, for the first time, complex online projects had became feasible, although most of such complex ideas only materialized ten years later. It was the beginning of a period in which the browser was not just a tool for viewing web pages, but also a platform for applications. Lialina described this as ‘the beginning of the future’. Revisiting this pivotal moment point launches a strong appeal, as it merges the science fiction of Terminator’s time travel with the magic of an idealized era, softened and blurred by the hands of time.

One of the important features of ‘Upon’ is the ongoing character of the project. Lialina explained that she will remain active on all three websites, posting, ‘voting’ and uploading new material, although the search for ’97 Web videos has offered quite the challenge. But this search can continue endlessly: the commitment to the magic year will keep users in their temporal limbo: each year when the ball drops on New Year’s Eve, the date goes back to January 1st, 1997. 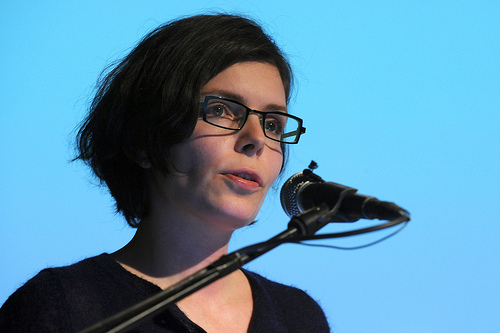 The second stage of reinterpretation for the new-old networks could start to take place when a technology loses its following in the here and now. In this case, Lialina indicated that the historical forgetfulness of the Web might pose a problem for historians of the future. Say, Google+ dies a quick and painless death tomorrow, and at the same time ‘Upon’ remains operational. How will the researchers of  tomorrow know what to think of the 90s interpretation of 2000s social networking?

For their oncoming exhibition, Lialina will be working on a fourth neo-’97 website; this time, an incarnation of the pinboard site Pinterest is in the making. Asked if she had – like other speakers who reinterpreted Facebook – already received a ‘cease and desist’ letter, Lialina confided disappointedly to the audience that she hadn’t. The project had only received media attention under the heading of ‘hacker humour’. But the value of ‘Upon’ in reflecting on current cultural practices and the workings of our technological memory is definitely headline-worthy.