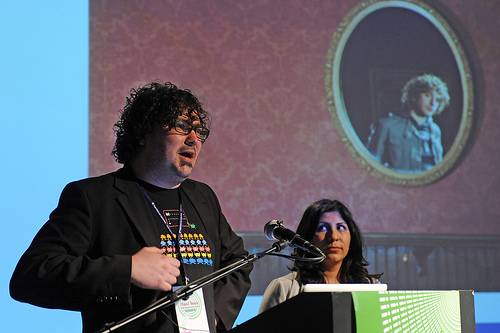 During session three ‘The Private in the Public’ of the UnlikeUs #2 conference, Ñusta Nina en Raoul Boers presented ‘Disliking the Like’. Both speakers are lecturers at the Hogeschool van Amsterdam but in different fields, which gave the presentation a split focus, at once on the trying to understand the common success of Facebook from a digital culture and a law optic.

Nina and Boers introduced the topic of social media and privacy by showcasing the work of Willem Popelier, a visual artist who featured in FOAM with his exhibit Showroom Girls. When inspecting a laptop in a computer store, Popelier encountered over a hundred pictures that two young girls had taken of themselves, posing in the store in front of the web cam.

During the exhibition at FOAM Populier had the live Twitter feed printed out real time, visualizing the social media reaction. During the course of the evening, friends had identified the anonymized girls and the online discussion took another turn when one of the girls’ mother remarked that it was their own fault for being careless with their privacy. The girls weren’t fazed; with no expectation of privacy they simply enjoyed the attention without recognizing a negative aspect.

What Boers and Nina underscored with this example is the different approaches to privacy amongst generations. The current generation might not be fully aware of privacy issues, but even when they are they seem unaffected, portraying what – often older –  researchers have coined ’digital narcissism’.

These digital narcissists seem to ask: “What privacy?” They use social media to convey a version of themselves that can be used as a mirror using the possibility to get affirmation. They like it to be liked, showing a need for vulnerable narcissistic identity confirmation. At the same time they seem caught by the social need to take part; the power of the word ‘like’ is apparent as no one can easily withdraw from such an essential marker: we need to be liked.

Boers personal experience shows that an older generation doesn’t always like using Facebook. They ask the question: “How much privacy is left?” They imagine Facebook as a Foucauldian panopticon, where their behavior is always visible, thus effectively influencing their behavioral choices, by default infringing their privacy. 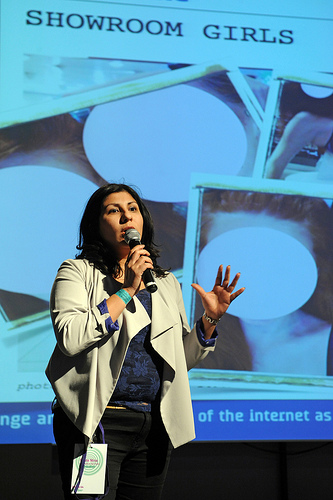 The presenters went on to ask then why it is that with changing user policies and a negative perception of internet as democratic medium, social media have still grown so much? The answer they posed is the fact that currently social media function as a point of conversion. Attention is moving away from the traditional Web and since companies want to be where the customers are, both users and advertisers intensify this move, resulting in a handful of monoliths.

Then, it seems that narcissism is not the problem, but the difficulty is in the fact that the threshold for participation is so low. Oauth and OpenID are examples of services where people show to be willing to centralize their data for the sake of convenience.

Venturing into the legal side of privacy in social media, Nina then pointed out that protection of privacy is part of the EU charter of fundamental rights, and that this counts for data both online and offline. The European understanding of privacy is thus directly connected to the protection of data. In that light, Facebook’s user-policy has not been helpful, as it has changed dramatically over the years with more and more data being public in default settings, and even when notified about changes, users are never consulted.

The American approach to privacy is, on the other hand, mainly consumer oriented. Industries have to self-regulate, which creates a bottom up scenario where markets can define privacy themselves, based on consumer trust and confidence. This means in practice that only if consumers complain, companies tend to change their policy. American companies operating in Europa thus find it hard to adhere to European privacy laws, but at the same time the big companies still have an amount of influence

Boers and Nina ended with a reflection on the question whether the way towards a change in Facebook’s privacy policy was something to reach from the inside. Their claim was that the democratic power of the consumer can actually be productively be mobilized. To reach this, the presenters pose that three main requirements should be taken into consideration: consumer choice should be used as leverage, sharing of data should happen wisely and most importantly, media literacy is key in understanding the opaque playing field of private data and social media.