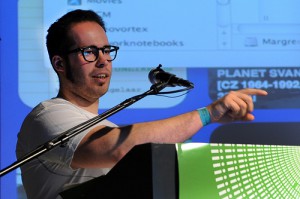 Opening up the second section of the first day of the conference (Artistic Responses to Social Media on the 9th of March) , Walter Langelaar introduced the Web 2.0 Suicide Machine, its functionality in relation to social media platforms and the spectacle of reactions that followed the project’s release.

(Click here for the video of Walter Langelaars presentation)

Langelaar mentioned that the Web 2.0 Suicide Machine was created by moddr_ , the media lab of WORM, the Institute for Avantgardistic Recreation based in Rotterdam, NL. This particular art project had a striking impact as its launch and functionality were featured in some of the most influential online and broadcast media outlets worldwide (for instance: Time magazine, BBC).

The reviews that followed the project’s release highlighted how different parties received the Web 2.0 Suicide Machine. The project was cited as a clever web site, “a nifty service that purges your online presence from these all-consuming social networks”, a commercial product, an artistic intervention.

However, to find out what the Web 2.0 Suicide Machine really is,one must watch the promo video of the project as it speaks for itself.

All in all, the Web 2.0 Suicide Machine was created as art project that aimed to disrupt the normalcy of the user’s online life in social networks by deleting the user’s account. It was designed for users that wondered how life would be without their online presence in social networks, for those who wondered how much free time they would have if they didn’t bother with their online frenemies and “social” obligations. The core idea behind the Web 2.0 Suicide Machine was to enable users to ‘unfriend’ in an automated fashion and to raise awareness on privacy issues, letting users know that they should be in control of their own data.

The Tale Behind a Movement of Social Suiciders

Langelaar informed the audience that the idea behind the Web 2.0 Suicide Machine originated in 2009. After all, in 2009 the world was already dominated by social networks; even the lingo that came with our favorite platforms was widely used. According to Langelaar, people in moddr_ were inspired by the fact that “Unfriending” was marked as the word of the year by the Oxford Dictionary and its equivalent in the Netherlands. At the same time Queen’s Beatrix Christmas speech on people’s infatuation with short messages only strengthened their motivation to intervene to the scene.

Simple as that, during the Christmas holidays of 2009 and after a series of interviews, the Web 2.0 Suicide Machine came to life.  Following the project’s launch, a little more than 50000 users patiently queued to… virtually commit suicide, to scrub off their online personas from the net while they sat back and relaxed enjoying their real lives.

Langelaar noted that moddr_ received a similar project shortly after the Suicide Machine’s release. Without them knowing, the  Burger King’s app  preceded the Web 2.0 Suicide Machine and functioned under the same principle of deleting online friends. As a matter of fact, Burger King offered a free whooper for every 10 facebook friends a user sacrificed- that was, of course, before the application was removed by facebook in 2009.

How Does It Work, What Does It Do?

Following Langelaar, the Web 2.0 Suicide Machine was launched with the function to delete MySpace, LinkedIn and facebook accounts. In addition, many users requested to extend its “services” for Twitter, mainly for privacy reasons as in 2009 users gradually realized the extensive visibility of their indexed-by-Google Twitter accounts.

As far as the technological background of the Web 2.0 Suicide Machine  is concerned, the software implemented an application that automated clicking ( in this case, deleting)  behavior. In that manner, instead of letting the user spend hours to manually erase a profile, the machine handled the deletion and generated a video memorial out of it. Moreover, all virtual suicides passed through the lab’s server which sometimes led to awkward situations: for instance, once somebody requested to delete a MySpace account with approximately 26.000 friends which overwhelmed the lab’s teeny tiny server for 3 days.

Moving on, Langelaar described how a series of reactions paused the project. At first, all providers blocked the server’s IP address which was circumvented with the assistance of a global proxy network. Sadly,  the “annoying” reality emerged as facebook initiated a legal process, not allowing the project to use facebook’s trademark  and commenting that the application could bloom, had it been developed within the facebook applications domain. Finally, after two letters from facebook, the social networking platform deleted WORM’s facebook profile, threatening to move further into legal action if the lab did not block the project. Not willing to spend years in courts, the initiative used this  material for an experimental film, altering a South Park episode. It is worth mentioning that the Web 2.0 Suicide Machine keeps receiving dozens of requests daily, despite the fact that it is currently inactive.

Based on the project’s extensive reviews in the media, outlets rather ignored the project’s aesthetic side and focused on its functionality. According to Langelaar, media reviews cited the Suicide Machine as a product from an actual company, a  commercial way to get out of social networks. On the funny side of the issue of confused reviews, moddr_ still receives requests to connect the services of the Web 2.0 Suicide Machine with that of… funeral homes.

Closing the session, Walter Langelaar mentioned that moddr_ is working on  new version of the Web 2.0 Suicide Machine that will allow users to download an application and perform the deletion on their own desktops. Lastlly, Langelaar referred to a series of art projects that also underline the spirit of intervention in the (social) media reality, such as the  Facebook Life Sharing Project that allows users to log in on facebook as Philipp Teister, the Bin Lover project that sells out the content of user’s trashbins as art and the Give Me My Data facebook application that helps users export their data out of facebook for reuse in visualizations, archives, or any possible method of digital storytelling.