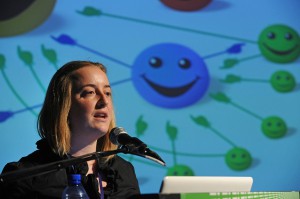 Session #4 Software Matters on the second day of Unlike Us #2 gives the floor to Anne Helmond (pictured right) and Carolin Gerlitz (pictured below). They read from their paper “Reworking the Fabric of the Web: The Like Economy”, which focuses on medium specific qualities that organize value and rework the fabric of the web. Facebook, for instance, has expanded over its platform’s boundaries and Helmond and Gerlitz give the audience  examples of how this development was enabled, such as social buttons, open graphs and new possibilities for developing apps. But what then are the consequences of this development?

A new infrastructure comes to life, in which both decentralized and recentralized data flows and production exist. Facebook can no longer be considered as a walled garden, but rather as a multi-layered and invisible fabric of the Web. Helmond and Gerlitz clarify their statement by showing how an infrastructure of instant and invisible participation of users comes into being through new devices and actors that go beyond regular relationship markers such as the hyperlink.

To start off their discussion of the Like Economy, a recap of the history of relationship markers is provided. In the early days, there was the Hit Economy. Information was linked through hits. Every hit and click represented a visitor of a particular web site and revenue was generated through banners. To increase traffic and value, webmasters would buy their way into the listings of search engines. In the late 1990’s, Helmond and Gerlitz carefully explain, Google introduced the hyperlink as the new value determination mechanism. Via the link analysis algorithm Google PageRank, the quality and quantity of links is weighed and indicates the rise of the Link Economy. In the Link Economy, inlinks became objects of exchange. They lost their former function as central relationship markers and could now be traded and sold.

Helmond and Gerlitz go on to point out that with the emergence of the Social Web, connections were massively made between people and between people and web objects. Digital devices such as social buttons (for instance via Digg and Reddit) are developed. The most prominent is perhaps the “Like” button. In February 2009, Facebook introduced this feature within its own platform. However, from 2010 onwards, the open graph allows the extension of Facebook’s internal graph to the external web and multiple platforms. Webmasters are now able to integrate Facebook features (for instance, the “Like” button) onto their own web sites. The production, distribution and consumption of online content, thus, transform into a social activity as well as a value producing activity. The Like Economy is born.

To move their arguments into the realm of Facebook’s decentralization and recentralization of data flows, Helmond and Gerlitz note how more than 7 million apps have already been integrated onto the Facebook platform and how there are approximately 200 billion posts each day, which are liked, shared or sent as Private Message via the external web as well as via Facebook itself. These are massive numbers and should be kept in mind when attempting to grasp the sense of reworkings of the fabric of the Web. 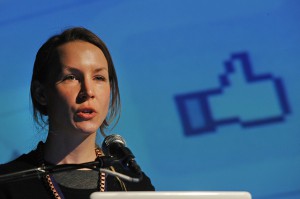 The aforementioned comments point to the decentralization of Facebook’s content flows. However, the recentralization is shaped through Facebook’s walled garden, as a very controlled data exchange. Here, data flows are centrally selected to contain demographics of Facebook users, after a decentralization of actors of value-creation has taken place. Helmond and Gerlitz portray the present-day tendencies to both facilitate platforms for information evaluation by users and recentralize the content flows back to Facebook.

Referring to an earlier talk on tracing and targeting internet users, Helmond and Gerlitz, too, draw attention to the persistent, and therefore highly interesting, role that Facebook cookies play. Via Facebook Connect, the cookie is placed on the user’s machine, even if the individual does not actively use the “Like” button. Facebook still manages to retrieve data on the individual user and their user activity. Additionally, the cookie does not merely trace Facebook users but also non-Facebook users, because the cookie is connected to an IP address not to one person’s identity.

How can we track these trackers such as Facebook, Twitter and Google? A pressing question that Helmond and Gerlitz are all too willing to answer. These researchers themselves employ digital tools and methods, such as Ghostery, widgets, social plugins and Facebook Connect. The screen behind Helmond and Gerlitz continues to fill with impressive, eye-opening visualizations of the beacons, analytics and trackers, for web sites on the Alexa Top 1000 list, that they have so far been able to map. The maps make it all too clear that clusters of trackers emerge around the key players, including Facebook. Operating in the back-end, they form the alternative fabric of the Web.

Next on their agenda for today is the issue of multiplication of data. It enlarges engagement and numbering entails an extensification of responses. As Helmond and Gerlitz remark: “The “Like” is always a collective. It is more than +1.” They pursue their argument through an explication of the enormity with which entities such as recommendation devices have joined forces with Facebook and how these initiatives have broadened the horizon of possibilities in data production. The recommendation culture and relational database (Facebook’s back-end) equal the rebuilding of user profiles. Data clusters are aggregated through algorithmic processing. Or better yet, everyday lives are (becoming) parts of databases.

A second implication of the Like Economy that Helmond and Gerlitz wish to address is the fact that the relevant type of participation does not rely on activity but on a certain level of passivity. Opting out from the outside is difficult to achieve. Therefore, users need to adhere to the call for action and opt out from the inside. This situation also holds that users should activate blocking devices to visibly protect their own privacy and possibly disconnect from recommendation devices. Users should be able to actively choose whether to partake in or distance themselves from the Like Economy.

Helmond and Gerlitz conclude their clear and concise talk with a summary of their arguments and call for more (user) activity within the emerging fabric of the Web. The Like Economy needs a wider set of actors, more diversity and more openness to facilitate the necessary disruptions from the inside.