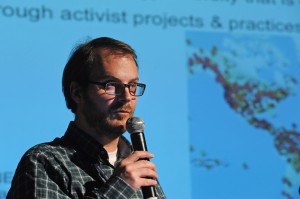 On the last panel of the last day of UnlikeUs #2, Social Media Activism and the Critique of Liberation Technology, Philipp Budka covered indigenous cyber activism through the case studies of K-Net and MyKnet.org in northwestern Ontario, Canada. He maintained that media technology diversity reflects cultural diversity through activist projects and practices. In building his argument, Budka offered a definition and typology of cyberactivsm, after which he explored indigenous cyberactivism and what initiatives of this kind look like.

(Click here for the video of Philipp Budka’s presentation)

Defining cyberactivism
There is no single definition of cyberactivism, just as there is not just one form of offline activism. What all types of cyberactivism have in common though, is that they all concentrate on socio-political and cultural change. A three-fold typology proposed by Vegh (2003) categorizes activism into: (1) avarness and advocacy, organising and carrying out actions, (2) organisation and mobilisation, which is a call for action, and (3) action-reaction, which can also be called hacktivism. Budka stated that there is a need for more historically informed and contextualized research in this area given that in distinct media ecologies and economies, activism and its use of social and digital media does not mean the same thing to everybody.

Indigenous cyber activism, outreach and inreach initiatives
There are currently about 500 million people that define themselves as indiginous, different cultural groups and different languages. They are a very powerful but dispersed group of people who are early ICT adapters. The reseason for adapting ICT is to improve the political, sociocultural and economic situation. Within indiginous cyberactivism two categories can be distinguished (Landzelius 2006). The first one is called outreach initiatives or activities and the other one is called inreach initiatives. Budka went on to give two examples of these initiatives both established in 1994. The first one is Zapatistas in Mexico which is an outreach initiative established to create a place to discuss ideas and establish a counter-public that would put pressure on the government and has led to political negotiations. An example of an inreach initiative is KOKnet, it was established to create an ICT infrastructure for the indiginous people in Ontario, Canada.

KOKnet and MyKnet.org, examples of indiginous activism
Budka further explored this example of KOKnet, which is short for Keewaytinook Okimakanak’s Kuhkenah Network. The overall objective of this initiative was to connect First Nation people and communities, the remote and isolated groups. The project started out with a bulletin board but has grown into broadband and satellite internet infrastructure within the last 15 years. The agenda of this initiative is to keep the people in the community, to use the technology that they usually find only outside of the community.

Within KOKnet one service has become especially popular and that is MyKnet.org a platform on which the indigenous people can create their own personal homepages. At the moment they have around 30.000 active accounts. Budka explain that people are become active producers of their own homepage on which they create representations of their local daily lives. With MyKnet.org the indigenous people are also learning to write, code, design and discuss.

MyKnet in the age of Facebook
Budka held a survey in 2011 and found that Facebook is the only Social Networking Site that next to MyKnet.org is being used within this community. He observed a shift from people connecting on MyKnet.org to people using Facebook to connect with family members. Nevertheless, MyKnet.org is still being used. Several factors come into play here, on MyKnet.org there is a sense of belonging, it was established especially for those people and that cannot be said about Facebook. Furthermore, it is still used because you can design your own page and have ownership and control over what you put on your homepage.

Cyberactivism = cultural activism
Budka concluded with stating that MyKnet is a good example of how ownership and control can keep people using media technologies. It shows that there is a need for supporting local languages, cultural heritage and cultural practices. This is done through control and ownership on one hand, but also through cooperation, networking and sharing. In this way, cyberactivism can also be seen as a form of cultural activism.

References
Landzelius, Kyra. 2006. Native on the net: indigenous and diasponic people in the virtual age. New York and London: Routledge.