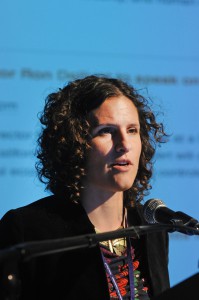 The very last session of Unlike Us #2, Social Media Activism and the Critique of Liberation Technology, was a culmination of what was in the air from the beginning of the conference. As Oliver Leistert has posed in his introduction to the session, the question is how does social media change activism, how does it change relations between protesters and influence larger power structures in a way that re-configure our understanding of protest as such? Stefania Milan, coming from sociological background, is aiming to answer exactly that with her latest research.

(Click here for the video of Stefania Milan’s presentation)

The audience got a first glimpse of her still-in-progress work on what she calls cloud protesting. The term may seem controversial in the sense that it implies a centralized, corporate structure but in fact points to the decentralized nature of contemporary protests. Through the notion of cloud protesting she understands social media not merely as a tool for, but also as a metaphor and enabler of today’s new forms of protesting and activism.

She sees collective action as intrinsically communicative and expressive, therefore social media is especially apt for enabling such dynamics. But why call it cloud protesting? First of all, cloud is understood as a metaphor for a network but it also signifies an online space where resources are stored. These are ‘soft’ resources, meaning they are immaterial and unstable, that provide a possibility for civic engagement and mobilization to take place. They are the ‘ingredients’ for building today’s social movements creating collective identities, mobilizing frames, narratives, know-how and expertise (e.g. how to set up a camp or live stream events). These ‘ingredients’ co-exist in this space, which gives them shape and presence in a body: tweets, links, photographs or videos are all embodiments that don’t exist in that specific form outside of cyberspace, she explained. The cloud is attractive to many because it gives access and resources to everyone with an internet connection. Also, it gives participants the possibility to select and highlight their preferred meanings, to customize their participation instead of having to ‘buy’ pre-packaged ideas selected by others.

What does this mean in relation to collective action dynamics? Milan pointed out two main consequences of the cloud: the changes it brings to organizational patterns and to identity building processes. She gave an account of different phases in the history of protests, how in the 60’s social movements were characterized by strong leadership and a strong sense of belonging to a group. With the rise of the internet in the 90’s, transnational movements with more flexible identities became possible, although these were still very much centralized and group identification was still present. Today however, social media is changing all of this. In this networked individual space, most of the nodes are in fact individuals, not groups. The fact that the costs of protesting are reduced with social media makes individual participation easy. Self-expression is now becoming a core aspect of protesting and this individualization is a rejection of the non-negotiable ideologies that used to characterize social movements. There is no need for centralized control any more over the collective narrative of the protest because the cloud collectively determines what fits the movement. In this way, Milan pointed out that the cloud (social media) becomes the group, providing a sense of belonging, but it also gives a lesser sense of responsibilities and the feeling of having no strings attached. In cloud protesting, identity building processes also change. Everyone takes part in the collective identity building by posting pictures or videos, blogging, tweeting. In short, the politics of identity becomes the politics of visibility.

In sum, Milan gave a couple of important aspects of why social media platforms are changing the practices of protest. They allow for a multiplication of values, they are based on everyday technologies that require no knowledge of their infrastructure (which can be a risk too) and the cloud has the power to influence the tactics of activists. Most importantly though, it enables the formation of customized narratives while at the same time it makes collective identity possible. It can provide a meaning to collective action that everyone can identify with.

In the end of her presentation, Stefania Milan brought in the idea of surveillance, or rather, auto-surveillance to cloud protesting. As pictures of protests appear online, surveillance can be outsourced by asking people to identify individuals in them. Oftentimes, it is the group itself that is asking for the identification of its own members, and frames this as something that is in the interest of the movement. She sees this as one of the most controversial aspects of contemporary social movements and finished her talk with pointing out the need to think about what we consider acceptable practice in today’s social movements and what exactly are the boundaries of such movements. The general agreement seems to be that social media is empowering movements but Milan revealed some aspects that also point out risks that arise under the new conditions of cloud protesting.