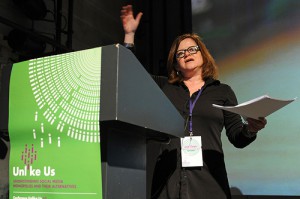 After her inspiring view on society’s non-existence in relation to social media at the Unlike Us #2 conference on the 9th of March 2012, we got the change to ask Jodi Dean some questions to further explore ‘the social’ and the existence of social media platforms in a capitalist society.

(Michelle)  Is building alternatives in social media the right tool for criticizing and resisting dominant social media platforms and hence overcoming the capitalist power structures from which these platforms emerge.

Not exactly correct because they are already in power relations. The point is that if we think about power distribution in concentrated networks; dispersion and centralization are two sides of the same coin. There are hubs and there is the long tail and more and more dispersion will also produce the figurative gap between the dispersed long tail and the one at the top. So this makes it easier to go to the thing that is more popular than it is to find the things that are less popular. I think that a lot of the mentality in building lots of alternatives participates in the dispersion and hence also concentration.

(Michelle)  Does this mean that the only resistance regarding these dominant social media platforms could emerge from within (Facebook in this case)?

Well, some of the art projects don’t want to be perceived as an alternative, they just want to make art and that’s just fine. My point is not to say that this stuff is pointless. If your goal is a kind of politics than you got to be mindful of this. So yes, I actually think that resistance could come from within and that would be finding ways to cease the platforms that are big or remake the ones that are big. Or it would just be the case of a kind of ecosystem, just in the way that Facebook ended up triumphing for a while now over Myspace. In an ecosystem other things will emerge, but than again it is not something politically radical.

(Michelle)  Within capitalism, are there ways of thinking around social networking sites (SNS) as not taking away the power of the collective? How would this look like and could we see something like that emerge in the near future?

First off all, how would it look like: it would not be privately owned. It wouldn’t be for the benefit of Mark Zuckerberg and his herd of people. One way to think of that is that you would rather have something like a system where, once we recognize that everyone is producing communication and communicate downward, that everyone than is entitled to a social wage. That would be a way around it, so no private ownership but than a social wage because everybody makes these things. But to answer your question if there could be a social media platform under the current conditions that wouldn’t take away from the power of the collective and benefit capitalism: no. The media that we have is designed to empower the rich and distract and disperse the poor. And that’s what happens. These platforms support inequality.

(Serena)  Would this alternative platform perhaps be owned by the state government, like public transport?

There are different critical mechanisms for people (online) to register their unhappiness or to research things about members of the parliament who are doing ‘bad corrupt things’ and this is particularly the case in the UK. Furthermore some of the people might also point to Wikileaks as an organization in the capitalist society that in some ways empower the people. But first Wikileaks is totally overshadowed by Assange. Here is why: dispersion. We focus on these 38.000 documents and we never look because who wants to look at 38.000 documents? So we say the number and that becomes ‘the one’: Assange and not the multiplicity of things because the multiplicity is too hard to grapple with. So that is why Assange / Wikileaks is not an alternative. And then the British government; I feel like recognizing the kinds of capitalist democracies that we have, that there are some ways of making some politicians accountable in minor cases. That’s what we have already, that’s not changing very much.

(Serena)  So maybe SNS should be owned by universities or education systems?

Here is the thing: all of my students think that Twitter it to letting Lady Gaga communicate with the fans. It’s not about politics, or the public sphere. It’s about Lady Gaga primarily. I hate to keep coming back to these power laws, but that’s what it looks like on Twitter. Even when we have university settings it’s very difficult for that to make much of an impact. It’s enough for people to say: I took a class and we read some political stuff and blogged about it. It doesn’t have a registration effect. If we think about the different political movements that have been going on for the last year and a half or so, that suggests that real change comes from on the streets and then uses media like anybody uses media; namely to organize, communicate and share. But it’s not primarily a media thing, it primarily on the streets.

(Michelle)  To what extent would you say that users of social media are perhaps to easily seduced by the tactics of communicative capitalism, like free labor? How much responsibility do users have to protect themselves and their ‘social’? 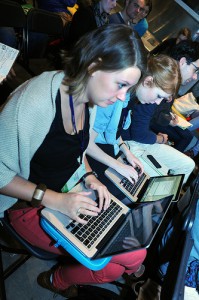 We all do that; it’s in our practices even though we know. It’s fun and we like it. I think that asking for the responsibility of the individual user is the wrong question because it’s an individualist question. Where the focus needs to be in this kind of question is: how are collectives coming to form themselves and become recognized by collectives. Somebody said in the comments this morning: What we don’t yet have a good vocabulary for, are the kinds of groups and/or collectivities that are emerging on things like Facebook. And that is true. I’m becoming a little bit more self critical about potentials for media. I became more aware of how we can become more aware of ourselves as a collective and that is unfolding, its fragile and risky and we don’t know yet how strong the collective is. In some way it may not be much more than Startrek fan groups but I noticed that the fact that there were at one time over a thousand Facebook pages for different Occupy groups: that started to have a wage for people in the movement. That made people think: hey this is now a movement that is happening. A part of it was that there was a common name that people share, common images and a common location to step on the streets.

(Michelle)  Is that than the centralized focus of the collective, the ‘common’?

My friends and I have been trying to figure this out. Jack Bratich for example wants to argue that Occupy is just a meme. I’m arguing with a couple of other different people, in different ways that you can’t just think about Occupy as a meme or that that’s the common point. It’s got to be Occupy Wall street, its got to be the connection to the economic crisis and the direct targeting of Wall street as the problem. They do have a common image/name but what set things off is the real economic dimension. There is a common: the physical on the street at Wall street.

(Serena)  So a collective problem is what binds people, something you want to fight for together?

You don’t have a revolution without there first being something wrong. There’s got to be a wrong or a crime for a revolution to get going. I would say that it can’t be the case that things that happen primarily or exclusively online can be revolutions in any sense. This is a medium and other things are outside. We shouldn’t confuse those two things, of course they are connected but it’s not that you can just have it online. Just because people deface a government’s website, that doesn’t bring down the government. Hacking for example has happened and that’s cool. It’s a kind of critical concept and than what you want it to do is to go a bit further and do something like erasing everyone’s social security numbers or erasing everyone’s debts. That would be something that would not just be mediated.

(Michelle)  Social media is not only about activism and the collective but it is also used as a platform to present ones self and creating personal identities. Isn’t that more of an individual act? Where can we find the collective in that particular use of SNS?

I think it’s an illusion to say that identities are individual because you only feel a need to produce them within a certain context of other people. It’s not been the case historically that people felt the immense need to construct an identity. Its a very contemporary thing and why is it a contemporary thing because we are under the conditions of neoliberal capital that tell us that u are in completely and alone responsible for your own live. It is you if you’re not successful. This individualism that we have is driven, motivated and produced by capitalism.

(Michelle)  When people feel solely responsibility for their own life, do you think that it makes them feel extra guilty when they are not successful or happy (enough)?

It’s a kind of immense almost unbearable pressure. What needs to happen is that we need to recognize that strength and freedom come through collective engagements and not through individualism because you can’t do it all.

It is very weird because social media is to individualistic, to individualized but you also have the other side. We start to get that it’s more than that; it’s the social surplus. So I think that since the Egyptian revolutions, I’ve noticed in my own media bubbles, much more of a kind of collective, political sense of people acting in a Facebook and Twitter setting very specifically with a kind of collective and political mindset. And I think that, especially in the United States, that has been missing on the left for a long time.

(Serena)  Do you think it’s easier to connect with people with the same political mindset on social media like Twitter, in order to create a community?

I think that the ease of use is there and that people are doing it also then has its own effect. Someone writes that blogs happen because people blog. So these social things happen because people are doing them, so it’s a little bit of a reflexive circuit. That’s not necessarily a bad thing. I don’t think that it’s a massive problem that people don’t know how to use Twitter well. I think the problem is political will, organized political will.

By Serena Westra and Michelle Oosthuyzen