With the presentation of a Skype interview, moderator Miriam Rasch introduced Richard Metzger’s commentary in light of his article “I Want My Friends Back” on DangerousMinds.Net [Twitter, Facebook] As practice against the political economy of social networks, a protest of sorts, it went viral. 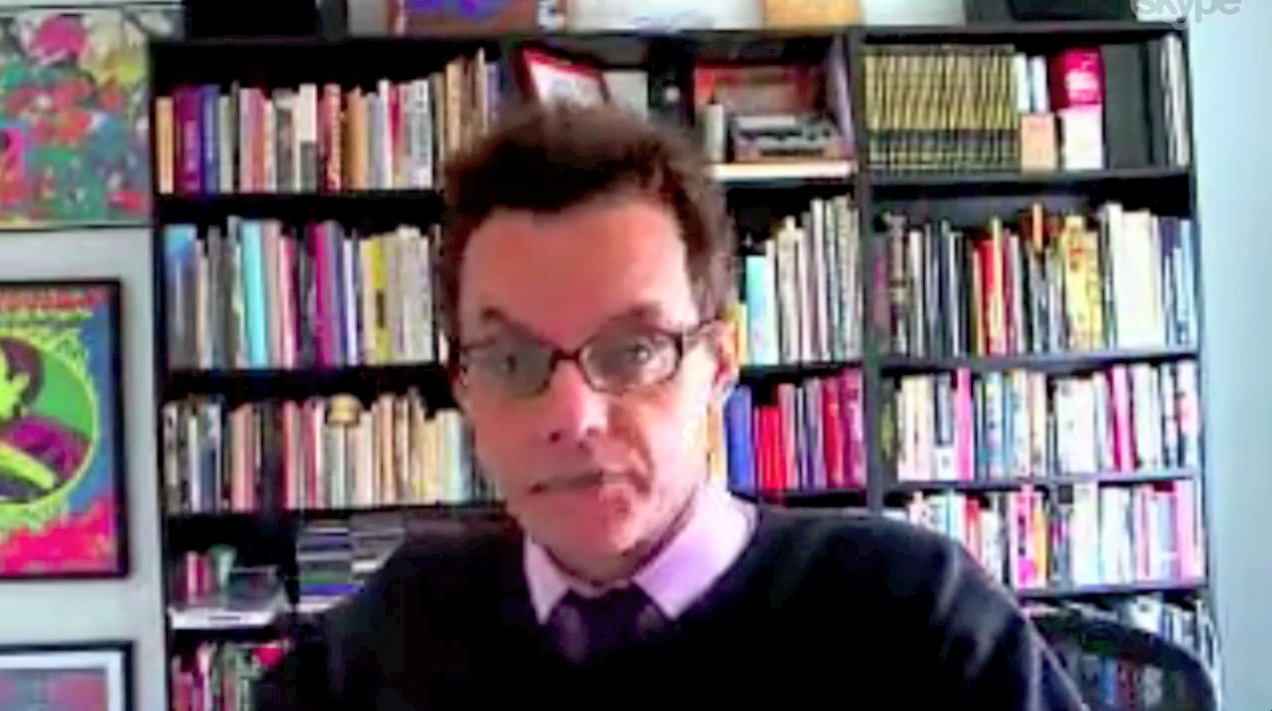 Richard Metzger: ‘I Want My Friends Back’

Metzger’s beef with Facebook is that they initiated algorithm changes without consideration of the trickle-down effects (1). A major theme of the conference as well as Metzger’s segment is when personal or political parties make use of these corporatized technologies, they’re reinforcing the vicissitudes of mainstream social media.

Beginning, Metzger prompts ‘technology should be netural, it shouldnt imply an agenda’, but acknowledges that people literally used to see AOL as the Internet because thats how they “got on”.  He compares Facebook: “a necessary curated RSS feed…people leave it open all day long and thats how they get their information. If you’re kept out of that for whatever reason, it becomes a free speech issue. It’s one company with a lot of control, that’s a serious chokehold that they have on information.”

He describes the effects of algorithms operating “behind the scenes” in the fallout of May 2012 when the administrators of DangerousMinds.net started noticing an abrupt drop in traffic without any plausible explanation: “Naturally, as anyone who has worked with datasets knows that’s just doesn’t work that way, unless theres been outside monkeying around”. [read: exasperatedly]. As a small business with limited information about how the situation would play out, Metzger and his group started brainstorming – “what do we do?” He proverbializes as a Facebook Fan Page manager, a warehouse filled with an inventory of pageviews,  and the next morning going turning the lights on 43% of the inventory was gone. Overnight. 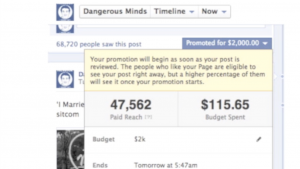 Richard admits that certain entities could get ‘good value’ out of paying for Promoted Posts. However, “specifically newspapers, HuffPost, or a medium-sized blog like my own suffer greatly – it’s not just cost prohibitive, it’s murder.” Both large and small publishers and companies, even brands worldwide are affected as rates fluctuate and relationship statuses become erratic. Richard imparted that for any one platform, this presents a unique problem. Existing as a middleman to content, Facebook is unpredictable for someone who needs to rely on the ability to be able to sell viewership and depends on referral traffic from Facebook. As a digital publishing venture – “this caused a great degree of consternation.” (2)
Facebook’s problem is a problem that scales – “FB” is literally one of ‘those’ situations; You can post something on the Internet, but until you post it on Facebook, “no one has looked at it”. Metzger explains: “It’s the proverbial tree falling in the forest, if no one decided to share it through social media. That’s the conundrum of sharing in social media.” NOT EXACTLY A MONOPOLY BUT, HEY, CLOSE ENOUGH! The New York Observer on 9/11/12 featured Ryan Holiday’s rant on the woes Facebook fan page managers, which Metzger says in the interview contained “the smoking gun I was looking for”; the admission of advertising executive Gokul Rajaram that the changes were in fact due to new ‘features’. (3)

“How can they think this is a good idea? To antagonize the writers of Huffpost, to antagonize Rupert Murdoch, for that matter.” There’s no doubt that the new generations seeking and consuming journalism online as opposed to within other physical channels. Metzger generalizes to say that Facebook’s attempts to optimize the organic experience of sharing is going to affect any media operation profoundly negatively. Albeit dramatic, he does have a point when he sets the stage at a meta level. In fact, the billion who use the service are subjugated by bad decisions in boardroom: “it’s the mindset that allowed those changes to be made at a corporate level that I think has to be questioned. Unless they get their shit together and do some king of soul searching, self-governing things, there are going to be countries that are going to regulate this, or demand that they be regulated in some way.”

Metzger believes that the act of silently streamlining changes that have a major impact (like this specific instance of Promoted Fan Pages on medium-sized digital publishing businesses) will help people realize that Facebook is becomes a less effective way of doing things and there will be a shift away from the medium. Especially as alternatives are built and once-popular platforms fade away – and inasmuch as we do this, we can make Facebook decidedly Unlike a “greatly walled garden”. As if he heard it from the horses mouth, Richard says “The problem that Facebook is going to find itself is when people start putting less energy into it. The people who actually built Facebook as a community are the fish that want to leap out of that pond and go someplace else.”

(1) Similar occurrences can be [tacked on] to Google’s Panda Update, leaving those who had tried combinations of black-hat SEO tactics to watch their referral traffic plummet. There are definitely others who think that Facebook Pages are a bad investment for small businesses, like Elan Dekel in Forbes.

(2) The context of the circumstances of online publication as a business setting has arguably been a hostile one. The con of social media enables some media platforms to posting sensational stories for the sake of traffic, according to the previously mentioned article by Ryan Holiday.

(3) Holiday’s “Broken on Purpose” in NYO. Metzger chronicles this as well, in a Dangerous Minds post on January 9th. Holiday himself explains that Facebook is broken on purpose, and there is other evidence that these Sponsored Stories are “raking in over $1 million per day”.

(-) Richard Metzger is also the founder of DisInformation.

(-) Dangerous Minds also features a web series speaking with writers and bloggers like Charles Hugh Smith [and another interview focused on Smith’s book Survival+], who comments on Occupy from the Counterculture cohort of the ’70’s.

(-) A Technoccult interview with an imposing Richard Metzger, is asked about R.U. Sirius’ comments on DIY decentralized networks and how the confluence of these activities is a hegelian process, the antithesis of big capital which is what the “fringe-anarchists” attending Contact Summit 2011.

(-) Read more about the Institute of Network Culture’s Unlike Us #3 program here.