Matthijs ten Berge is co-director of illuminate Outdoor Media. Berge was the first presenter this morning at the Institute of Network Culture’s Urban Screens conference. Before diving into this talk he began with a message, “I’d like to say that I’m not here just to present my work to you, but I’m here to meet you and learn from you. I’m looking for future inspiration and future people to team up with.”

Berge’s talk attempted to answer a few questions related to the creative use of technology. He presented four of his own projects with the hope of inspiring the audience to take initiative and get organized in order to upgrade the public domain.

Media architecture should not be thought of as being the biggest screen on the biggest square with the brightest and biggest audience. Rather, it is finding those applications that can truly engage us with our public space.

Berge went on to present a few of his projects:

Moodwall
Prior to the project’s conception, the Bijlmer Tunnel was a dark lit, graffiti ridden underpass. Over a five year period, Berge and his team worked to install the low-resolution Moodwall – the wall reacts and engages with pedestrians in real-time, displaying content based on human movement.

Cruquius’s LED Landmark
The  LED Landmark in Cruquius is a 30-meter LED tower located outside of a shopping mall near Schiphol, The Netherlands.

LedTex
“The goal of the Textile Museum project was to create a digital collection of the textiles that they have, and translate what is on the inside of the museum to the outside,” explained  Berge.

New Museumline at Museumplein, Amsterdam
At the moment Berge is working on an ambitious project that should be familiar to anyone who lives in Amsterdam: renovating the museumline that runs through the grounds at Museumplein in Amsterdam. Berge took the initiative to approach the Amsterdam municipality with his idea for the new museumline in 2005. His hope was that he could develop an innovative way for pedestrians to interact with their surroundings. “This is a very rudimentary example,” warns Berge , “but one idea that we are working on is something that we refer to as the ‘Amsterdam jump’. (see clip below).

In closing he urged everyone, “If you have something you want to do in the public domain, do something about it! Go to your municipality and make changes. If you have a good story they will probably want to be part of it.” 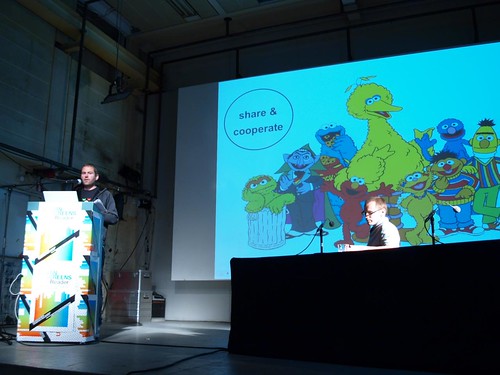