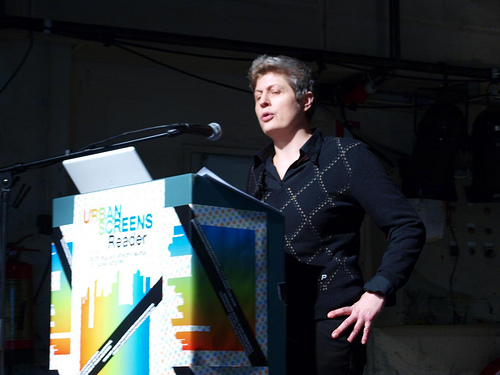 Nanna Verhoeff, associate professor in the department of Media and Culture studies at Utrecht University, had one of the very few yet very welcomed theoretical presentations in relation to the theme of the conference, urban screens.

Her contribution focused in particular on mobile screens (such as mobile phones, PDA’s and GPS devices), and their role in urban screen culture. She discussed the specificity of these screens in relation to the concept of mobility, an often encountered trope in the history of screen media.

The first question which the speaker addressed was: how are these mobile screens different from the large digital displays in urban space? And, in relation to a broader range of screen media, how do mobile screens influence the relationship between the user, the screen and the space outside the screen?

As Nanna Verhoeff points out, one of the differences between mobile screens and traditional static screens is the fact that mobile screens are ‘application based.’ The mobile screen serves as an interface for the convergence of various technologies and software applications: they can act as cameras, interfaces for online communication or surfing the web, as well as GPS devices. While the relationship between user and screen as material object may remain ‘static’ and unchanged in the context of the mobility afforded by the use of mobile digital screens, what changes and deserves attention according to the speaker is “the relationship to the off-screen space, the world surrounding the screen, [which] is perhaps becoming at once more intimate, more flexible, and more mobile”:

Because of these characteristics (application-based hybridity + “intimate” closeness) mobile screens put forward practices of a mobile and haptic engagement with the screen that fundamentally revise the spatial coordinates of large, fixed and (paradoxically) distancing televisual, cinematic, and architectural screen-dispositifs. When the screen is becoming an interactive map, camera, and a networked communication device all-in-one, these mobile (touch)screens and practices of mobile screening problematize set boundaries of agency, between making, transmitting, and receiving images (who “makes”, “programs” and watches them). Moreover, these devices turn the “classical” screen as flat and distanced window on the world, into an interactive, hybrid navigation device that repositions the viewer central within that world.

Equipped with mobile screens we therefore become a sort of ‘postmodern’ cartographers: we produce space by navigating through and interacting with an augmented space. But unlike traditional cartography which is concerned with the systematic and objective rendering of space and space relations at different scales, creative cartography in 4D enabled by mobile screens is a subjective, flexible and open-ended practice of personalized space mapping.

What are some of the applications which enable this practice? GPS navigation, for example, in which the movement produces the map, is one of them. Another example of subjective/ creative production of space is geo tagging, through which geographical identification data is added to media such as photos. In mobile augmented reality, reality browsers or ‘layar’ applications, the information enhanced map fluctuates according to our position.

In conclusion, Nanna Verhoeff points out to a new notion of cartography which is being revealed by the use of these applications, by means of which we are not only navigating space but also constructing space. According to her cartography:

it is not a precondition only, but a product of navigation, and as such, cartography is becoming more than a systematic representation of space: it is a performance of space in a true sense: a making and expressing of space.

With this notion the media theorist emphasizes the necessity of a shift in discussing some of the contemporary media practices from the notion of representation, which received criticism in modernity for its potential to produce alienation and engender passive consummation, to the notion of process, performance, performativity, more specifically “the process in which representation comes into being” through the embodied experiencing of space.