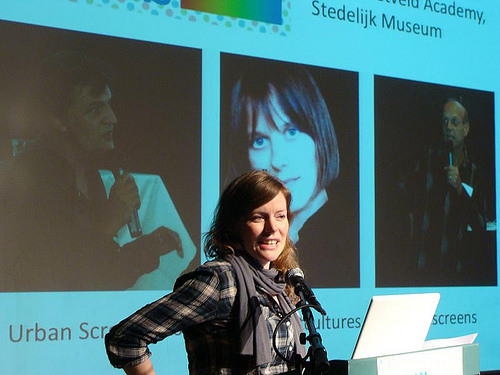 In the final session of the Urban Screens conference which took place in Amsterdam last Friday, Sabine Niederer announced the launch of the first book dedicated entirely to the urban screens theme, Urban Screens Reader. The book was edited by Scott McQuire and Meredith Martin from the University of Melbourne and Sabine Niederer from the Institute of Network Cultures. The Urban Screens Reader contains three sections: ‘Urban Screens: History, Technology, Politics’, ‘Sites’, and ‘Publics and Participation: Interactivity, Sociability and Strategies in Locative Media,’  which cover diverse approaches to the pre-history, contemporary contexts and future directions of urban screens, in seeking “the conditions for establishing a better balance between the contest of civic, commercial and artistic values in urban space.” (McQuire, Martin, Niederer: 10). The book in .pdf will be soon available for free download on the INC website.

The book was launched as a result of the series of events and seminars which took place throughout the four years since the first urban screens event organized by the Institute of Network Cultures in Amsterdam in 2005 in collaboration with Mirjam Struppek, Gerrit Rietveld Academy and Stedelijk Museum Amsterdam. This series of events encouraged the exploration of opportunities to employ the growing 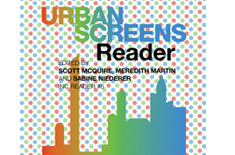 infrastructure of  displays in public space (LED signs, plasma screens, projection boards, intelligent architectural surfaces, etc.), currently used mainly as a tool to influence consumer behavior through advertising, and to repurpose them as platforms for creation and cultural exchange, strengthening the local economy and encouraging public discussion. Since the first Urban Screens event in 2005 in Amsterdam, related international conferences have been organized in Manchester in 2007 and Melbourne in 2008.

This year the International Urban Screens Association (IUSA) was also created. The organization takes on the mission ‘to inform and support the ‘worldwide Urban Screens movement’: the expanding use of dynamic digital displays in public spaces; their considerate and sustainable integration in the urban landscape; and the ability for screen communities to collaborate in the digital space to share content, experience, ideas, innovations and emerging possibilities.’