In 2005 Nanette Hoogslag developed the idea for Oog, inviting artists to react to current affairs in an online environment. This became ‘Oog’, a weekly online page in one of the largest Dutch national newspapers the ‘Volkskrant’. At Urban Screens Hoogslag’s presented a few projects from the Visual Correspondents Foundation, illustrated with various examples of the screen-based art works commissioned over the last 5 years. “The news medium continues to develop away from print and toward the digital, yet there is one aspect of this media evolution that hasn’t evolved: editorial imagery (the illustrations, and cartoons are which are part of them),” began Hoogslag.

Hoogslag, along with member of the Visual Correspondent Foundation and VFC-Berlin, commissioned seven artists to make screen-based works looking at specific border-related issues in their home country. 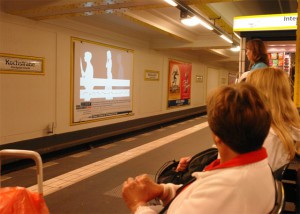 The work traveled to a few locations in Europe, eventually making its way to the historic U-Bahn Station Kochstrasse in Berlin, Germany (also referred to as Checkpoint Charlie). Hoogslag added, “This project is saying that walls are not just from Berlin, walls are everywhere: not only physical, but internalized as well as virtual. She was impressed that the piece was stirring up conversation amongst onlookers,

“The men that ran the kiosks, working on the platform, had to explain the work to the commuters – and it created a nice surrounding dialogue. It was a nice to think that the men selling the news, became a part of the news [or an extension of] the magazine.”

In addition, Hoogslag added her hope that we can “challenge media, challenge people and challenge assumptions with creative and powerful visuals.”

She left us with three examples, that she felt, helped evolve editorial imagery, Motomichi Nakamura’s The Levee (a visual commentary about the Hurricane Katrina disaster), Samiha, and an interactive work about the world’s news by Lust.