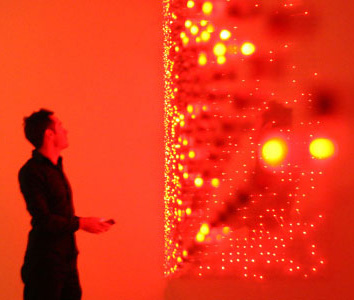 Do you know that annoying buzzing sound that comes from stereo speakers when a cellphone rings? That noise in the speakers is interference, and it is audible evidence of the electronic field that emanates from your cell phone. Cell Phone Disco, a project by Auke Touwslager and Ursula Lavrencic, visualizes this electromagnetic interference. The installation itself is a large surface that covers a wall with several thousand red lights, when you make or receive a phone call in the vicinity of the installation the lights react. “It’s not about what you can do with your phone, but what your phone can do with you,” suggested Lavrencic.

She continued, “What is interesting about the project is that we never tried to place it in a certain context, it just sort of happened because we were interested in it.” Since the project began in 2006 it has traveled from it’s humble beginnings to art and science galleries around the world including: The Contemporary Museum of Art in Baltimore, Wired Next Fest, The Science Gallery in Dublin, and The Franklin Institute in Philadelphia.

Touwslager commented on Cell Phone Disco’s recent interest from architects, “They like this idea of wrapping their buildings with media, but often they worry about what content to add. That’s what I think attracts them to Cell Phone Disco: it’s a public screen without content.”