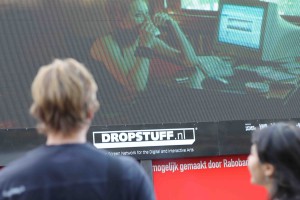 Between the 21st and 30th of September the Led it Up Team from the MediaLab Amsterdam team got a spot at the Nederlands Film Festival. Between 19.00hrs and 21.00hrs people could use their smart phones to play the game Galgje with Dropstuff’s screen placed in Neude Utrecht. Using dutch film database video content, and part of the Culture Vortex and Beeld en Geluid initiative,  they aimed to their movie fans/knowers public. There was great weather and a relaxed ambient making it easy to enjoy a nice time there.